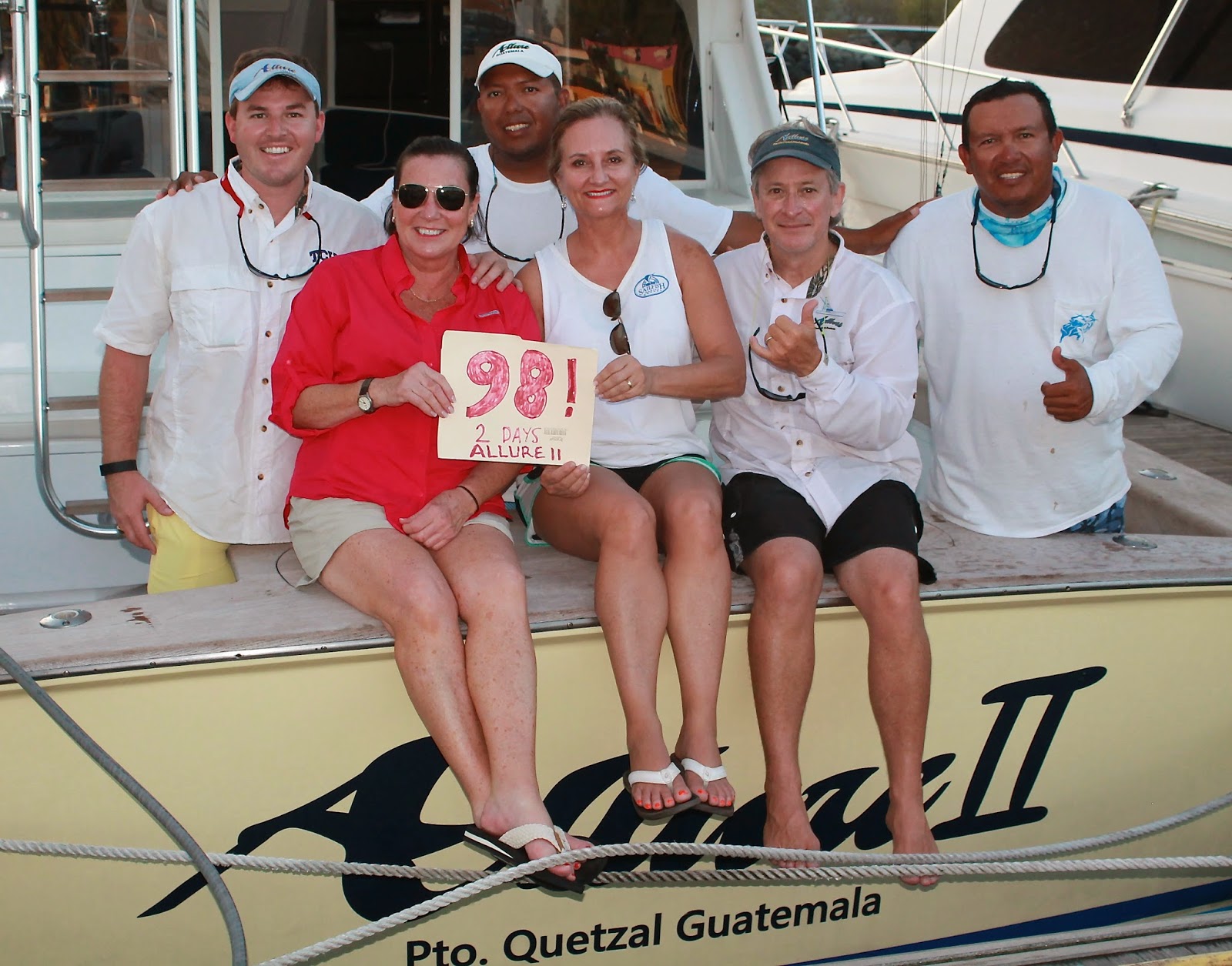 William and Teresa LaFuze with Donelle and Hill Dishman
Jan 3rd and 4th we fished with the above crew and the fishing was pretty much off the wall. On Saturday the 3rd a steady morning bite turned into a hot bite and by just after 2.00pm we had released 48 sails!! With the action just 18NM off the break wall things were looking good, it slowed down a little in the afternoon though and by days end and lines out at 4.00pm we’d released 58 sailfish from 80 bites and raised around 90. 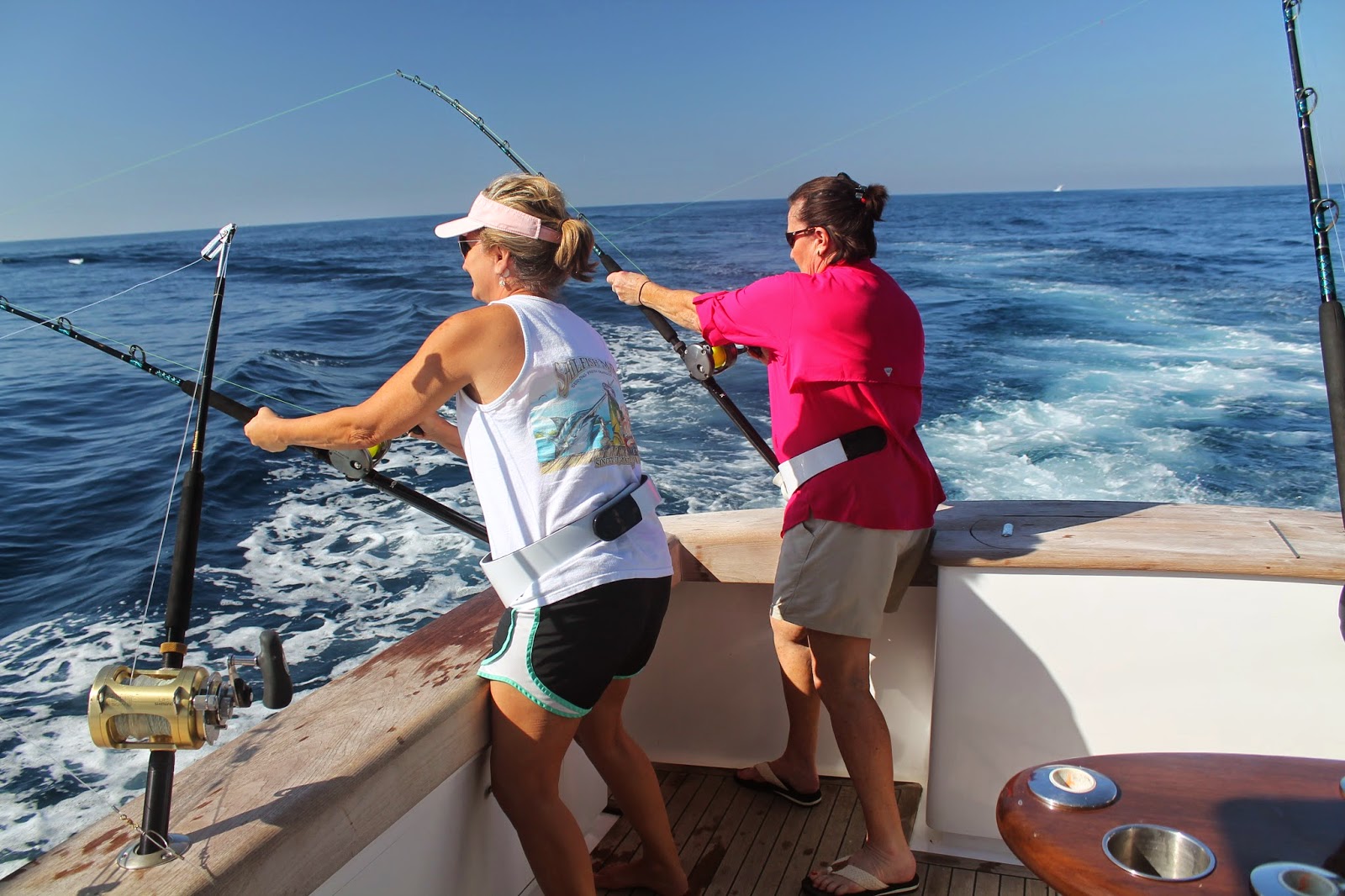 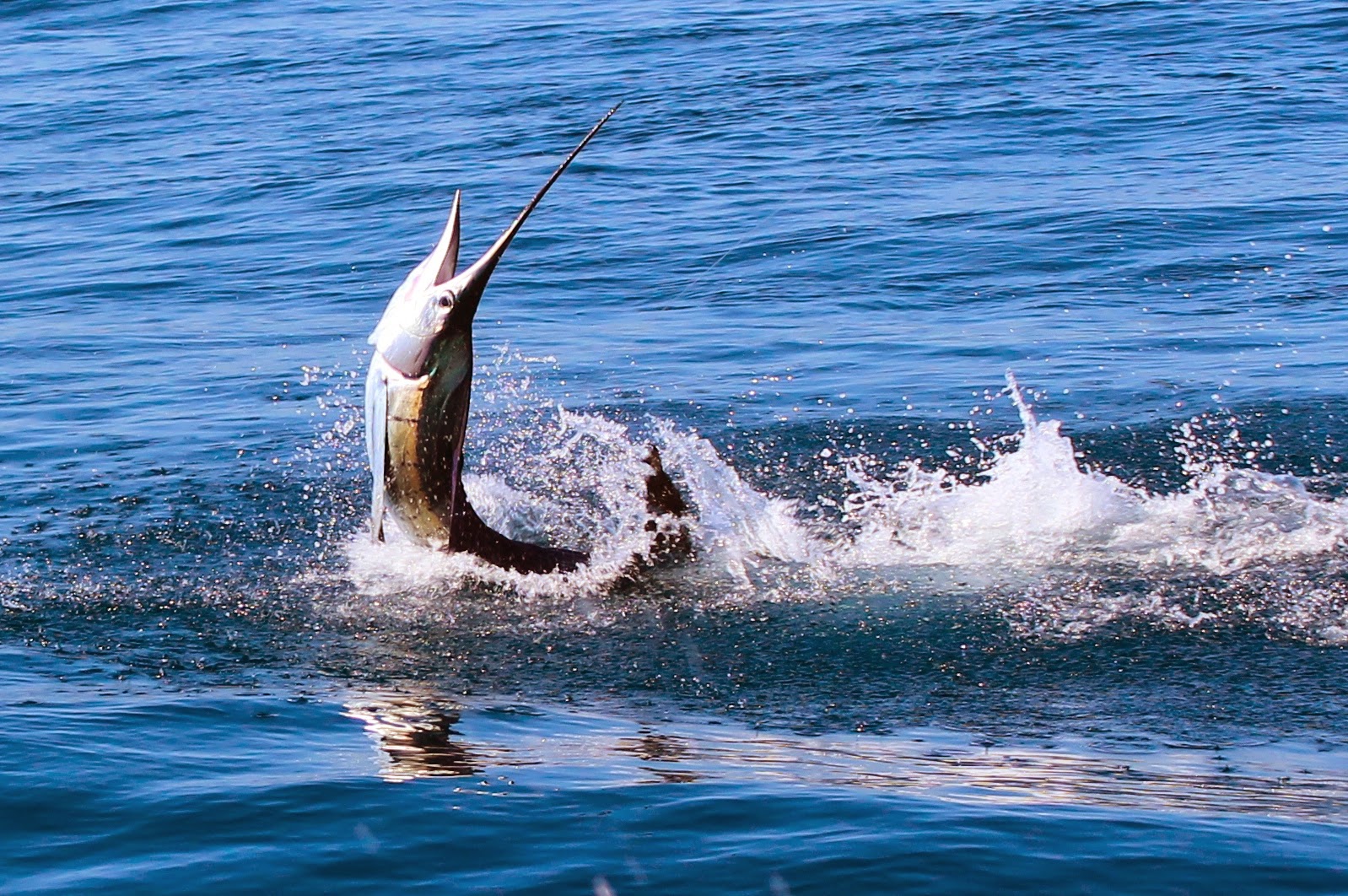 Flat seas and an awesome bite!!
Jan 4th slowed down some though it was still very steady right through the day with 40 releases from 53 bites. Some excellent averages from them with a 2 day total then of 98 sailfish releases and a couple of nice bull mahi’s, what a great bite!! 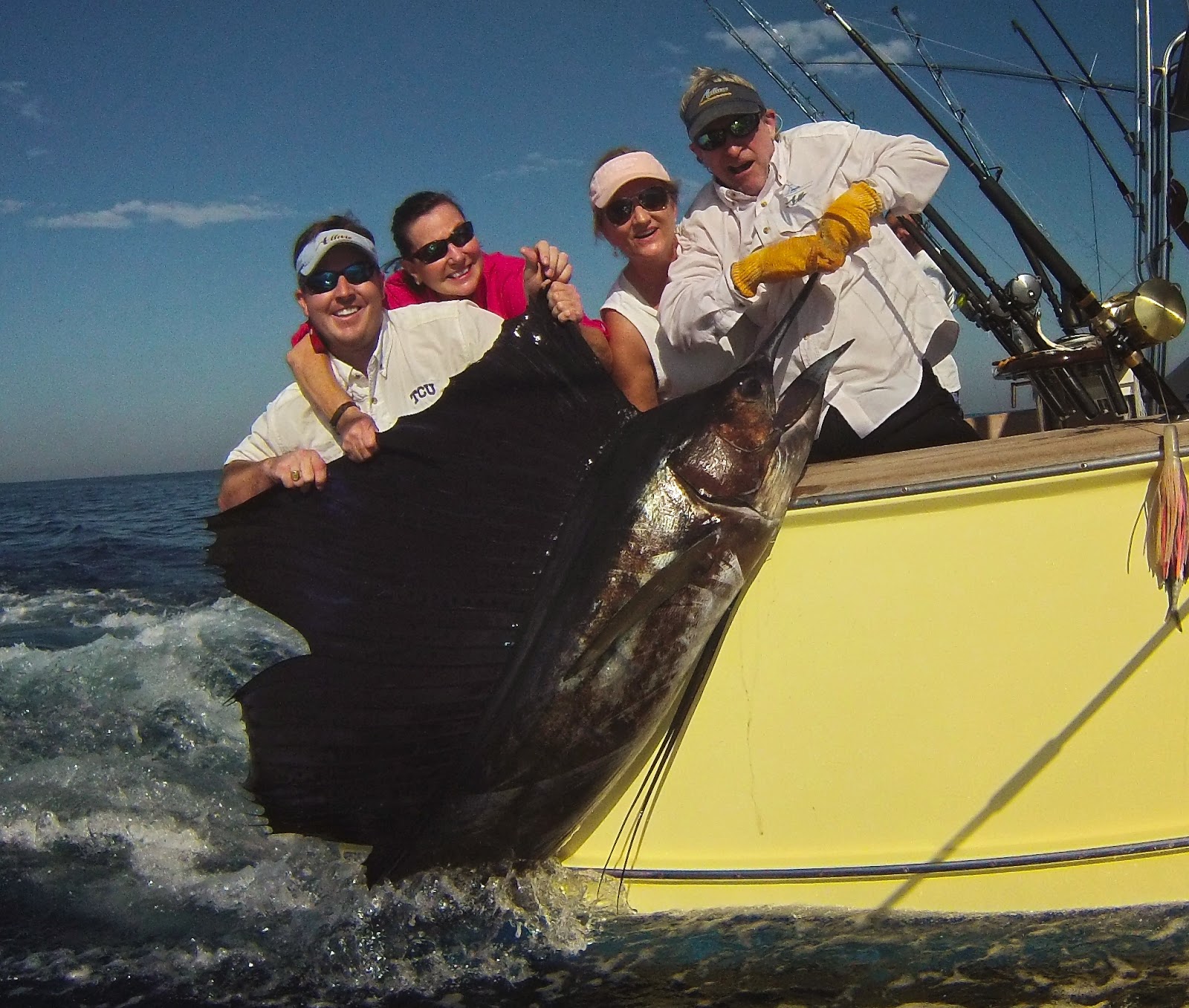 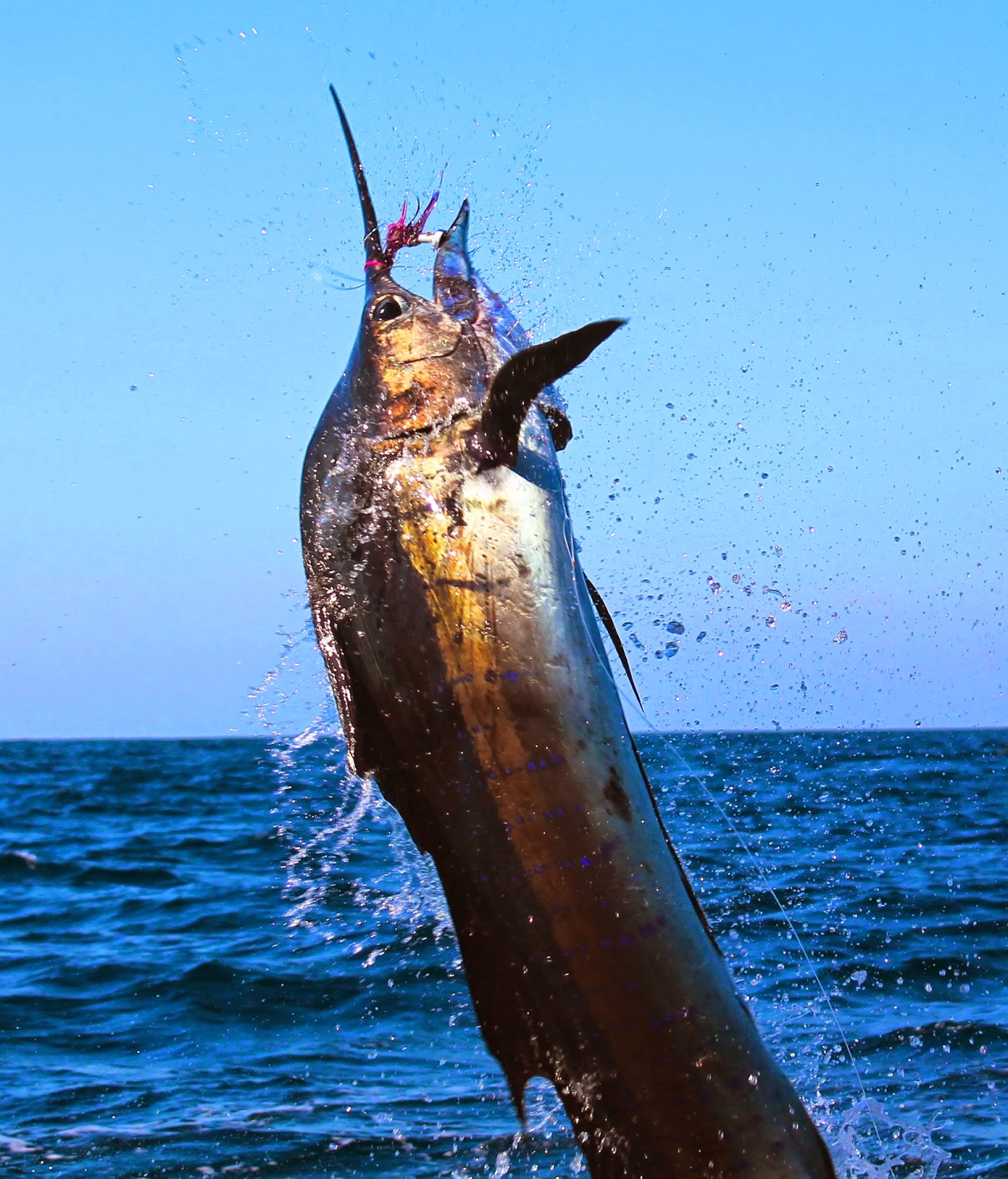 Big sail on the fly.
Jan 2nd we had a fun day out there with Hill Dishman on the fly, the bite was good and they were hot on the fly with a few multiples coming in and a couple of double headers released. Only one tippet popped today and we recovered all the rest of the flies with 14 releases from 23 bites and 41 sails in the spread
LOW & BAILEY GROUP 61 RELEASES! 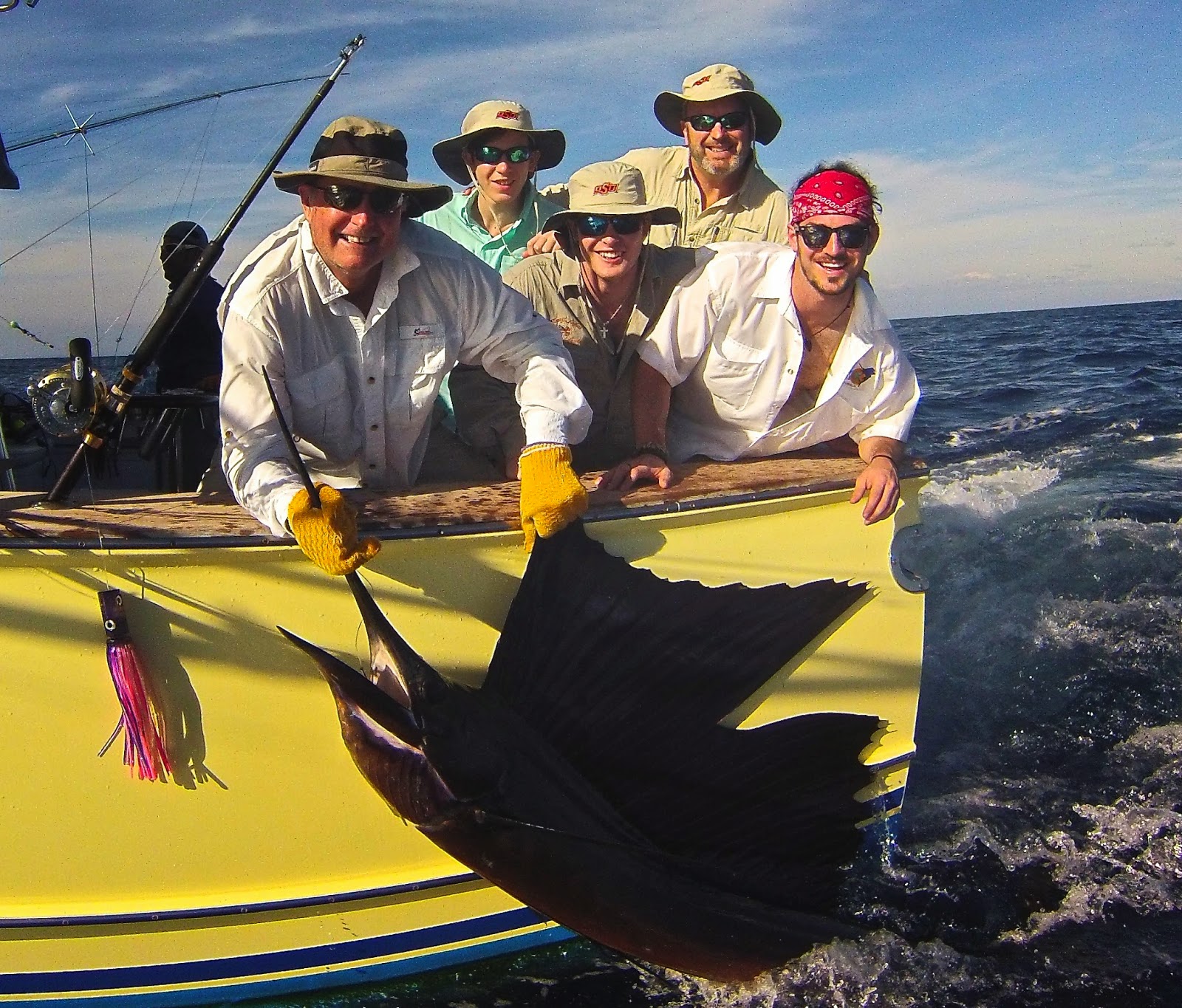 John and Robert Low with Terry Bailey and son’s Coby and Colton
Dec 31st and Jan 1st we hosted the Low and Bailey father and son teams over the New Year period. John and Robert Low were last down here for Spring Break 2 years ago and had released 45 in two days of fishing so the pressure was on to beat that. We pretty much landed on the fish our first morning out with a cover up of over 7 hot sails behind the boat, incredible start!! Twice we had 5 hooked though a couple dropped off both times in that first frenzy. The rest of the day was steady with doubles, and triple headers, raising 61 sails we released 36 from 53 bites. Jan 1st was a little tough after a large New Years eve. Though the fishing seemed slow in comparison it was actually pretty bloody good with 25 sails released from 32 bites and a 2 day total of 61 releases. Now we have a new goal for their next trip down…. 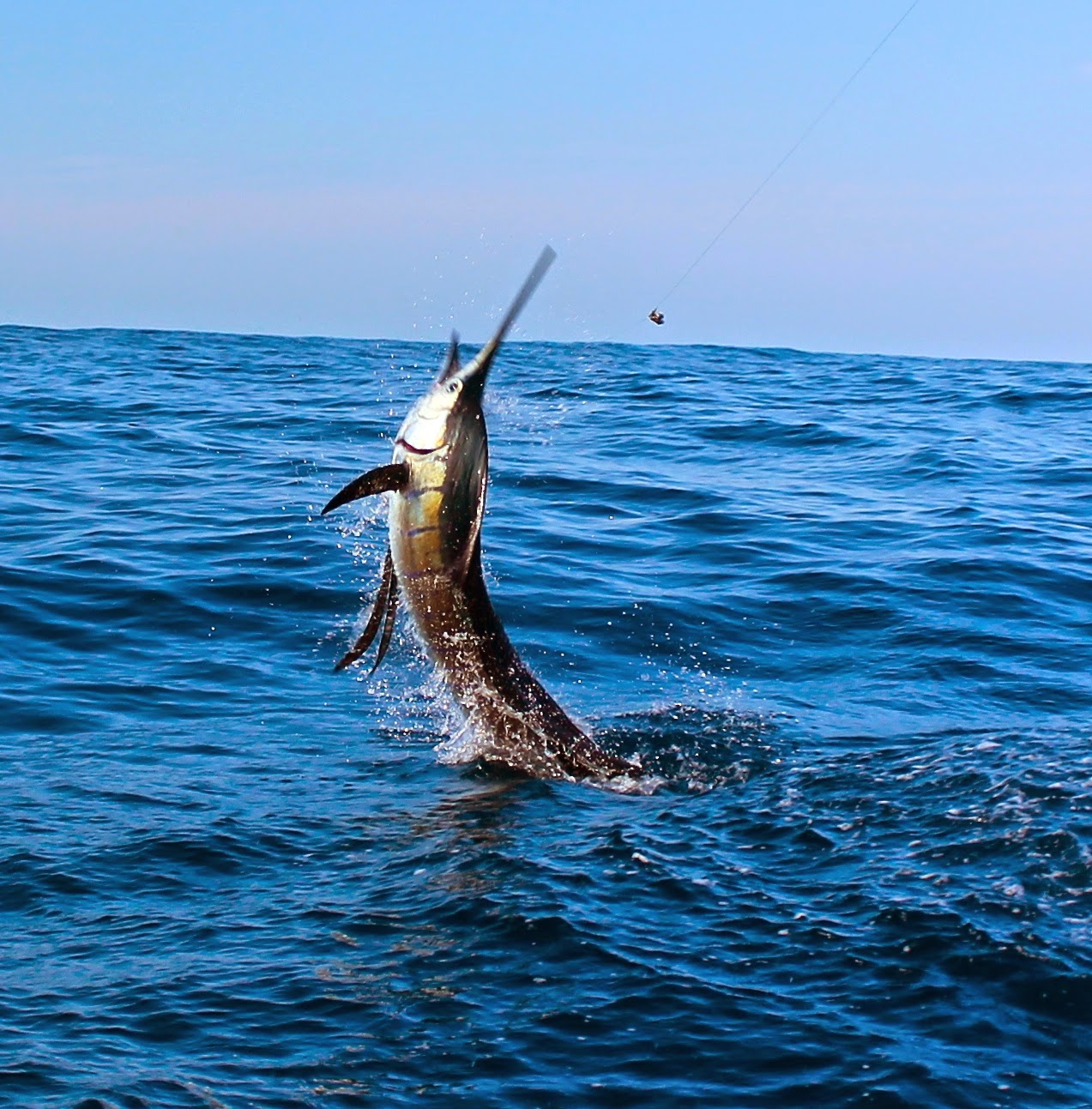 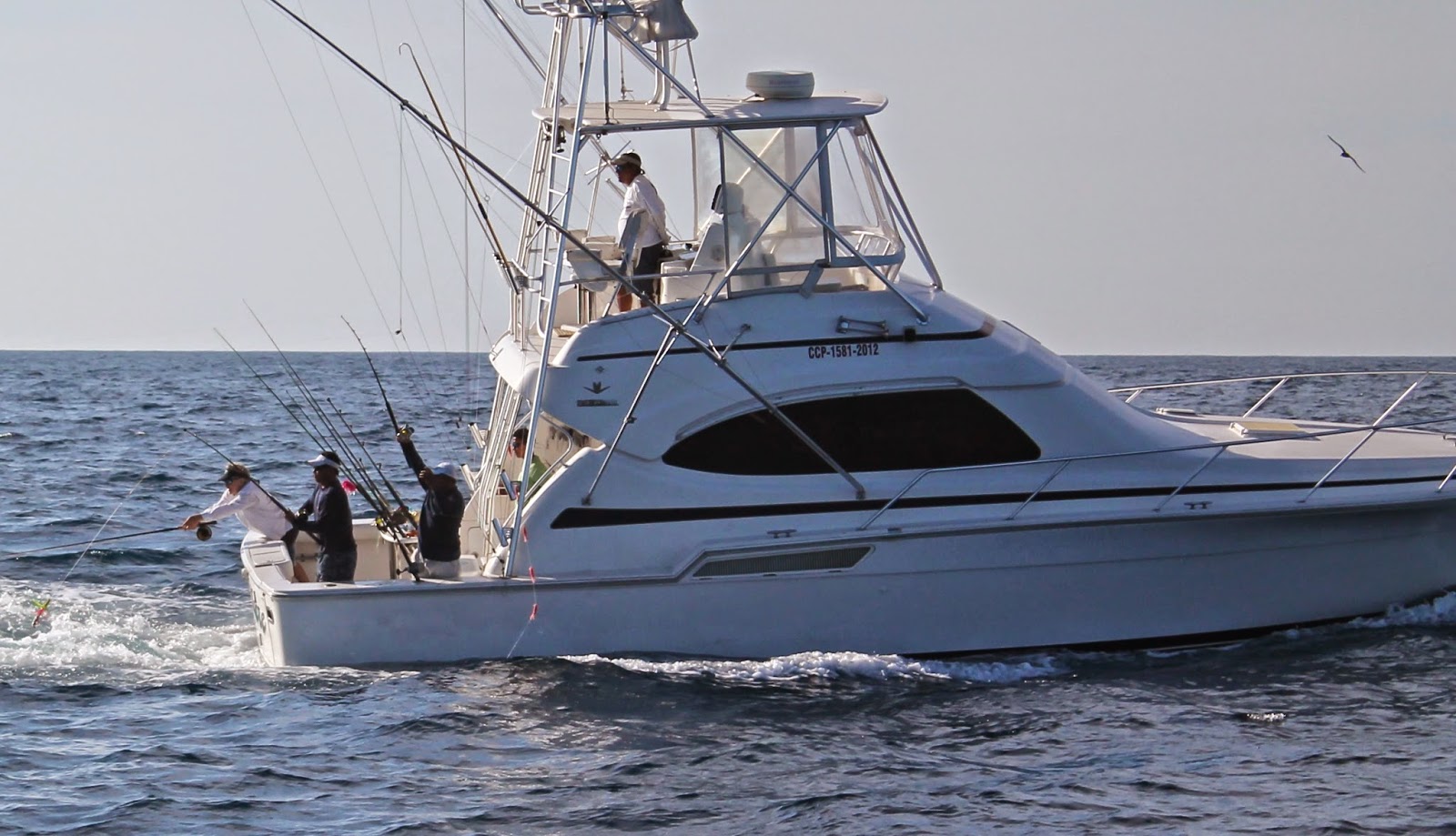 Cast!!
Allure got in on the same bite on the Dec 31st and Hill Dishman was sticking them pretty good today!! They saw the same, raising multiples and some perfect hot teaser fish to tease in and cast the fly to. An awesome end to the year for Hill releasing 20 sailfish on the fly from 27 bites!! A helluva day to remember….Jan 1st the hangover didn’t help with 4 from 10 bites, still a great 2 day total of 24 on the fly!
FAGG / BREAUX GROUP DEC 30th 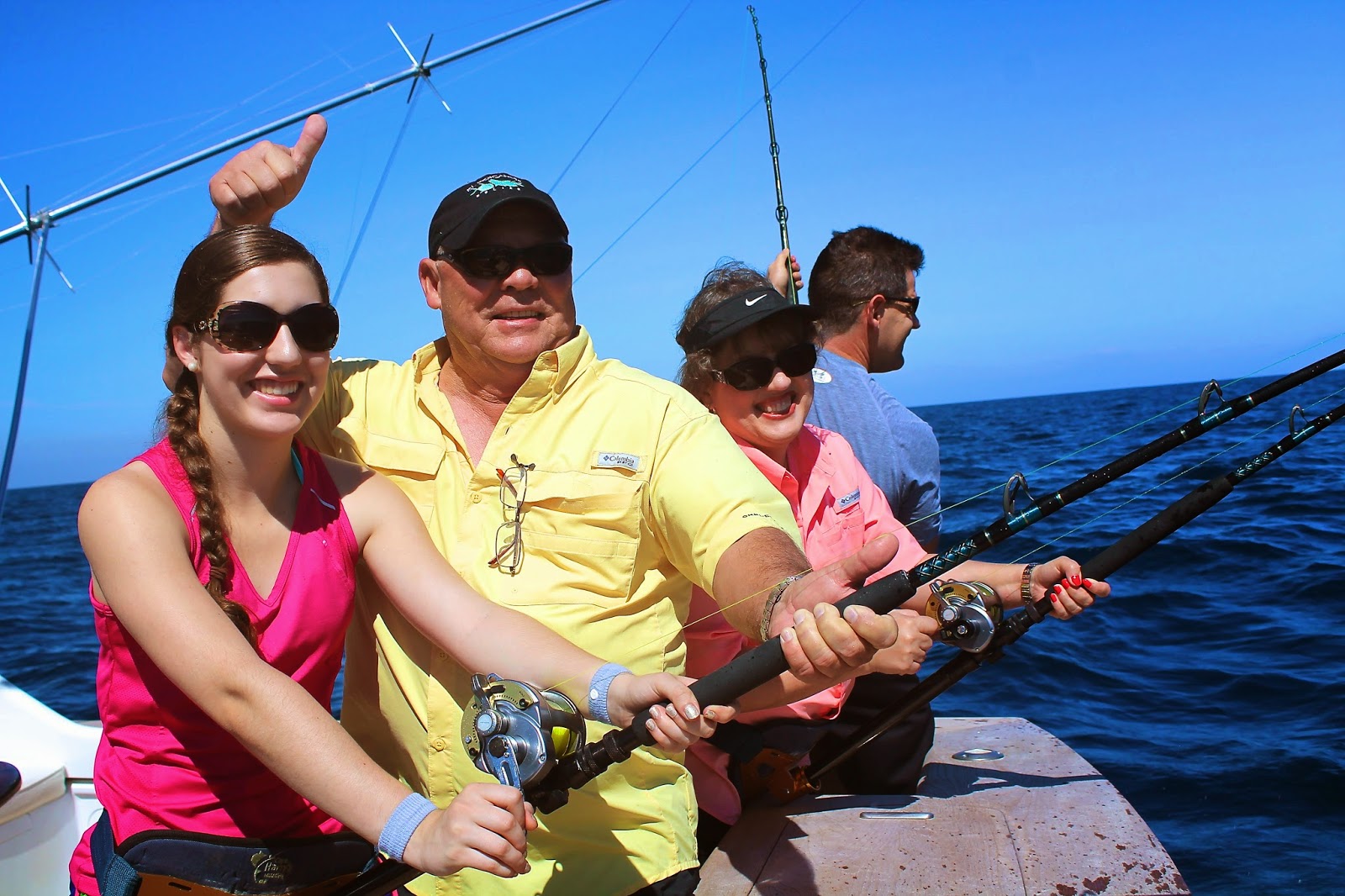 Bailey, Larry Fagg, Jeanne and Brent Breaux on a triple header
Dec 30th we welcomed back Guatemalan regular Larry Fagg, this time with his daughter Jeanne, son in law Brent and granddaughter Bailey. The group along with Larry’s wife Linda spent a couple of nights in Antigua before spending the last 2 nights on the Coast at the OASIS and one day of fishing. A reasonable bite had been found off-shore to the east the previous day though we plugged away at the bottom of the pocket and had a great day in there releasing 13 from 20 bites. Great to see the Breaux family all get their first billfish releases!! Bailey with her first sail.
DECEMBER 29th ON THE FLY 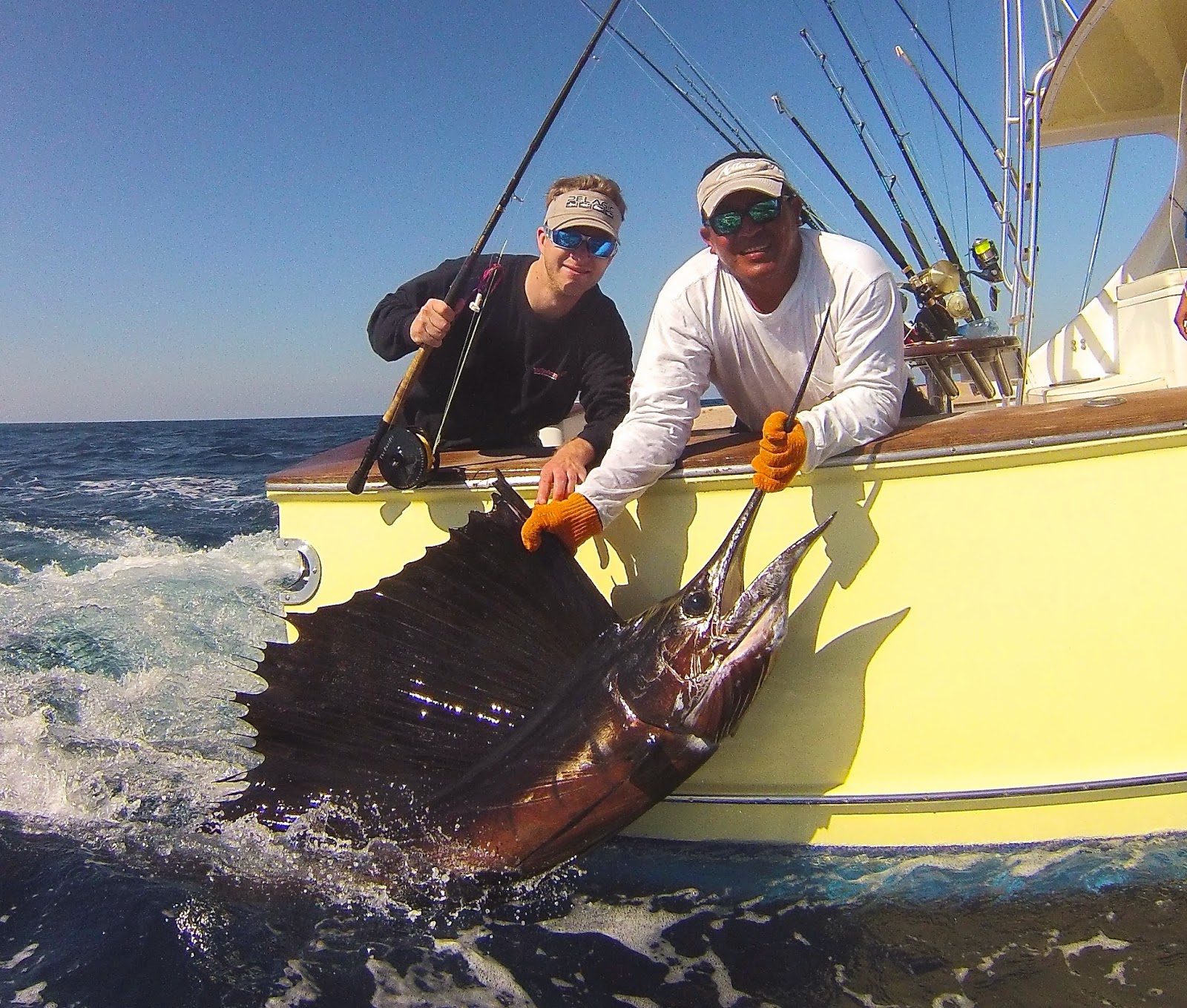 Drake Dishman.
December 29th we went out the east side looking for a new bite from the previous days out to the west. We found some fish inshore and then again in the deep water off the edge later in the afternoon for a good day on the water with 19 sails raised and 6 releases from 10 bites on the long wand. Good stuff!! 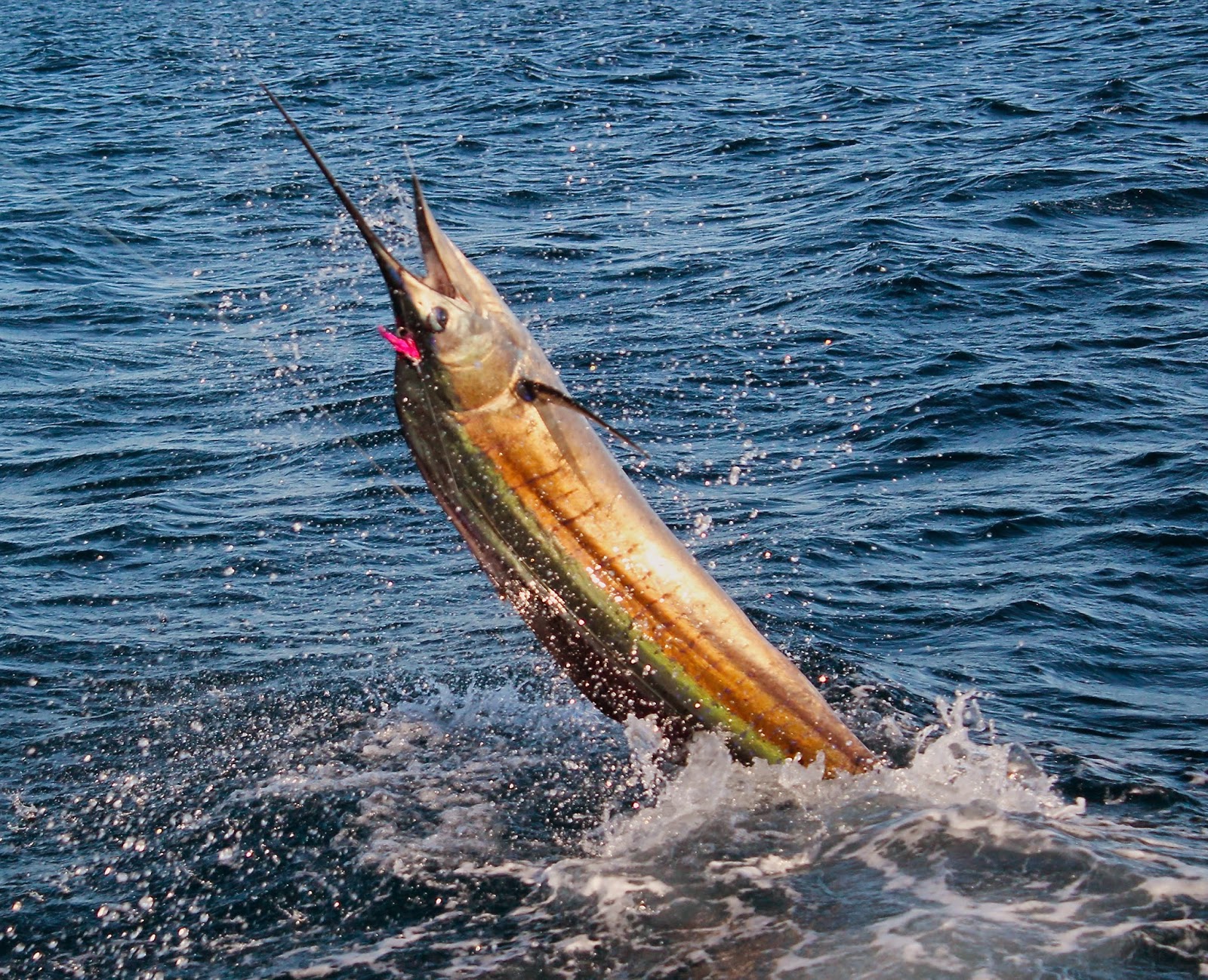 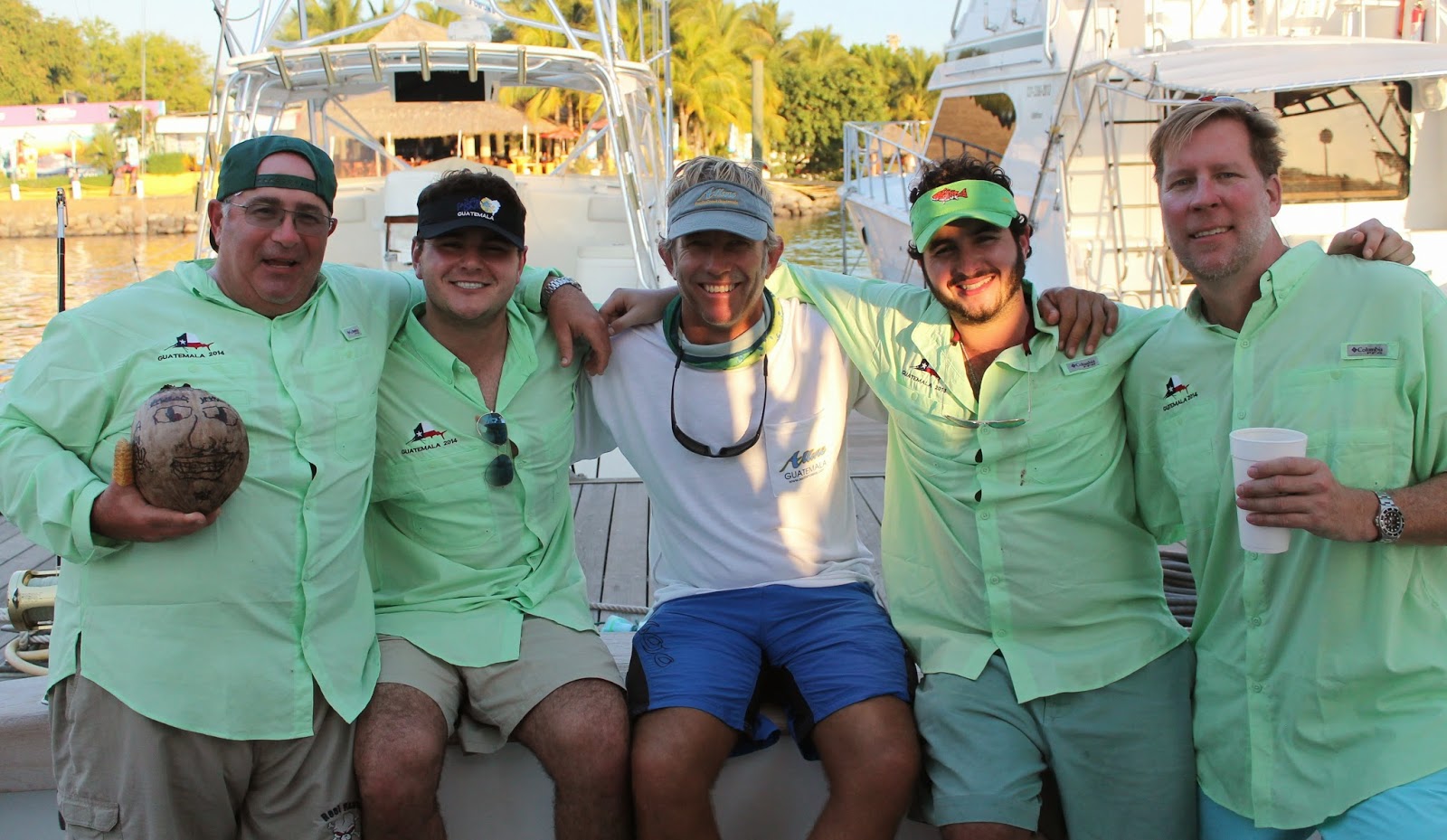 Brad, Graham and Dillon Klein with Chris Bean
Dec 27-28th it was good to see Chris Bean AKA Señor Frijole and Brad Klein back down here in Guatemala, and this time with Brad’s sons Dillon and Graham. It was good to finally meet them! The fishing had been slow so we rolled the dice and headed way out west and it proved to be the right call. With Capt Klein on the helm while I was down below giving a briefing we raised a small blue that came up on everything though didn’t eat anything. After a slow morning we got into some fish around midday and ended up raising 19 and releasing 13 from 18 bites, including a 3 of a Klein triple….. 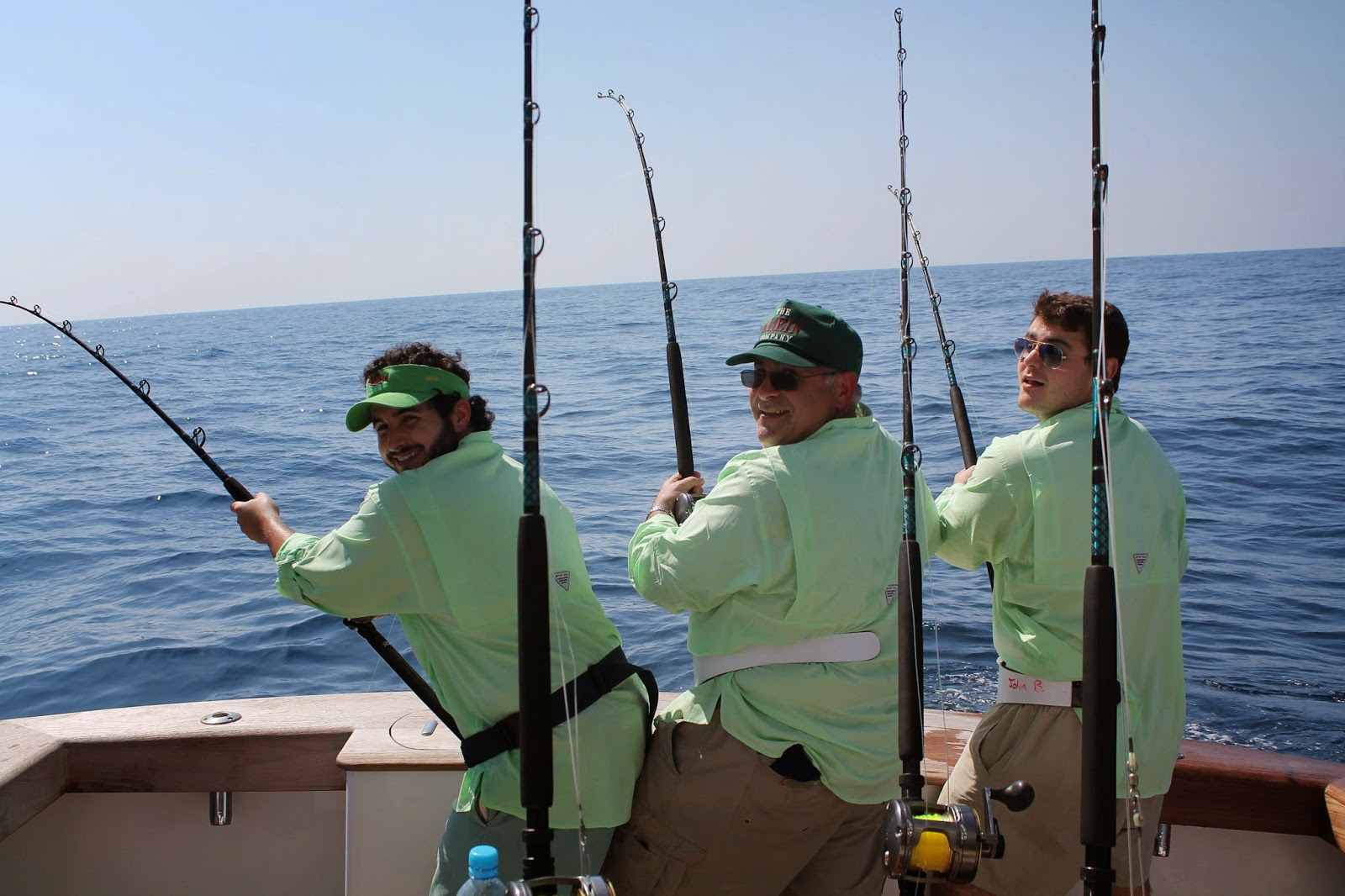 Dillon, Brad and Graham showing how its done
The next day we were back out there though the clean blue water was getting pushed further to the west, it was steady all day with another 13 releases from 17 bites today. Also a couple of nice bull mahi’s for the bin both days out. 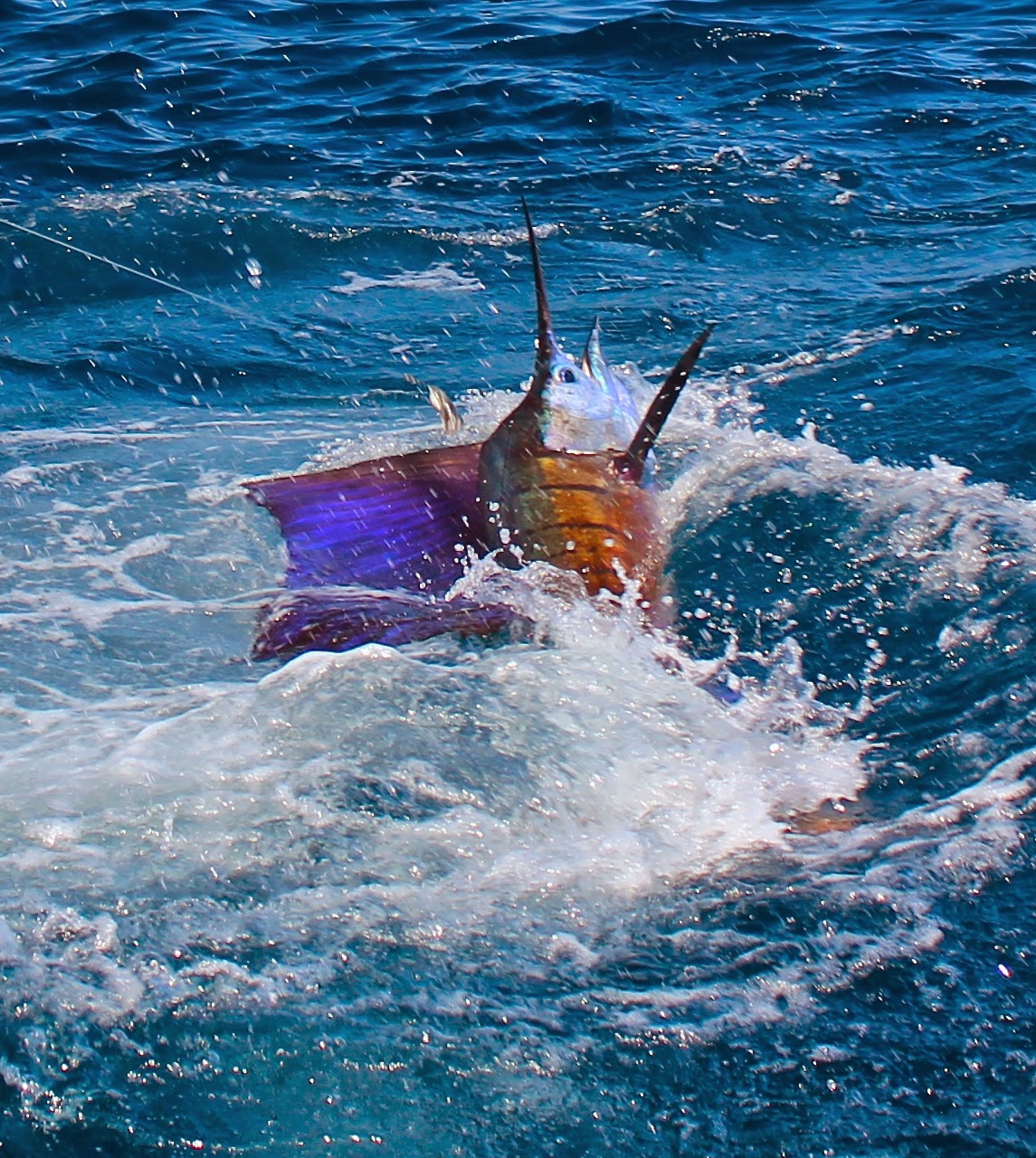 Sail with the lights turned on.
BUCKLEY GROUP DECEMBER 13th-16th 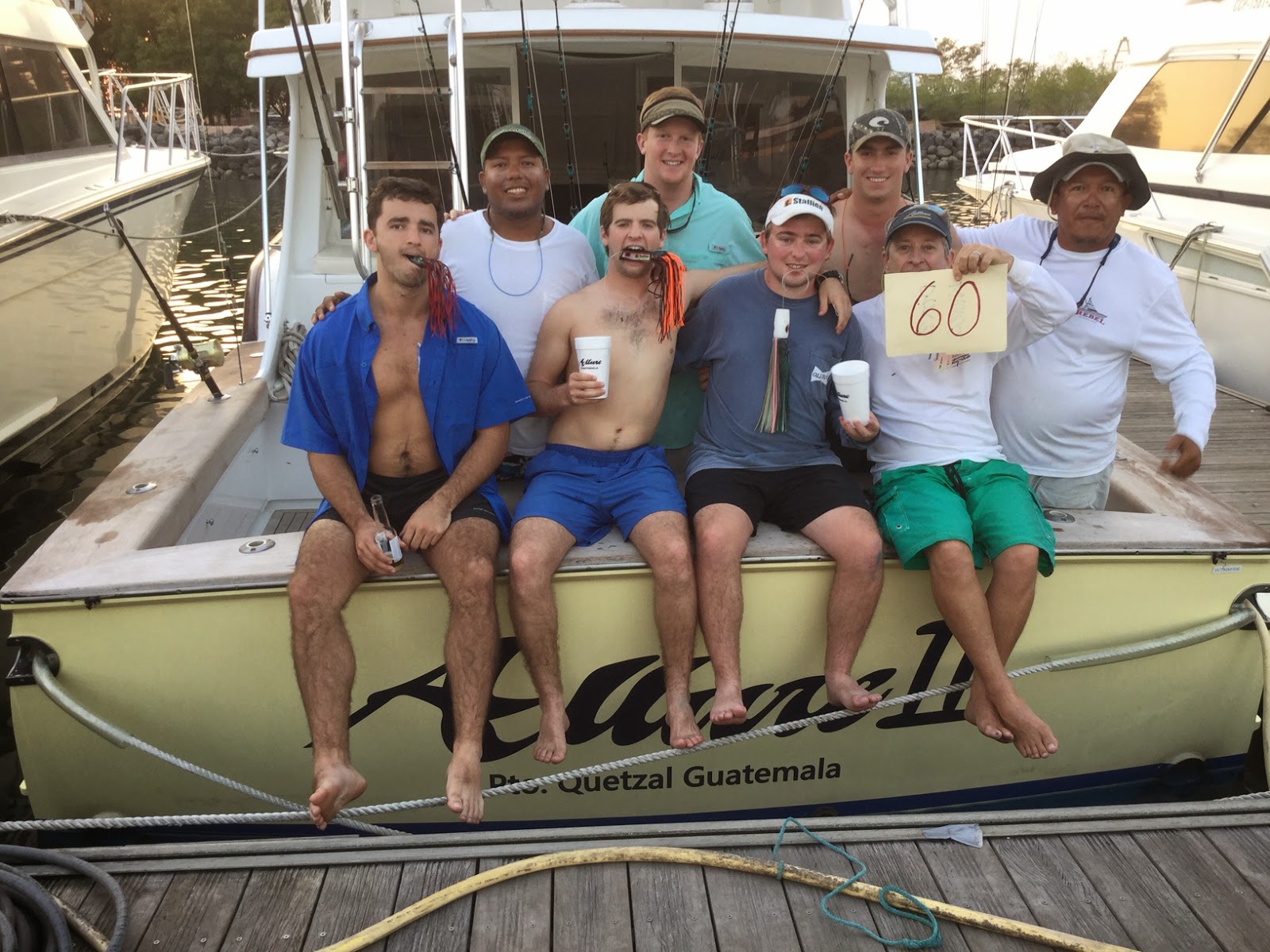 60 in 3 days!
John Buckley and his college buddies came down with Uncle Hill for 3 days of fishing and crushed them good. The fishing was out wide though they found life galore out there with spinner dolphin and tunas, sailfish and marlin. In the 3 days of fishing the group released 60 sails boated tunas and mahis and also raised 5 blue marlin of which 3 ate the bait, though, unfortunately none of them stuck….still an awesome 3 days for the group!! 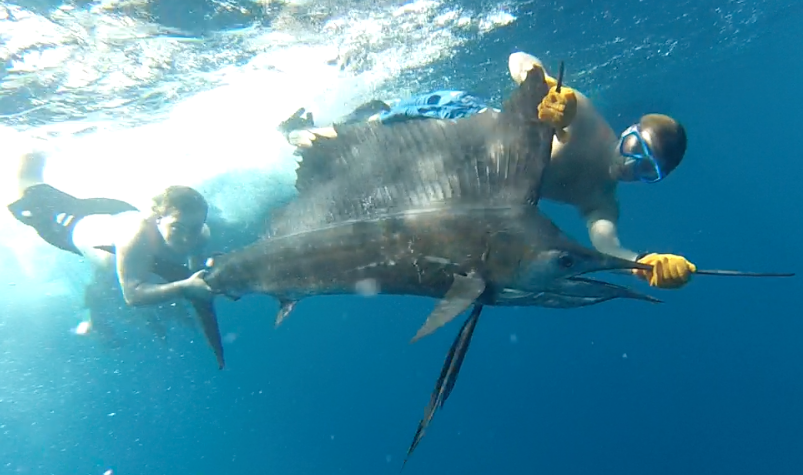 Cool shot!
And on the 13th Hill was out on the fly releasing a very respectable 8 from 11 bites.
All good in Guatemala!!
Amazingly we still have a couple of openings in February. As of above the fishing here has been consistently good to excellent, get in touch with us to get in on it as from here on in it is primo!! As of now we have Jan 19-21 available and in February 10-13 and 24-26 on ALLURE II. ALLURE also has availability.