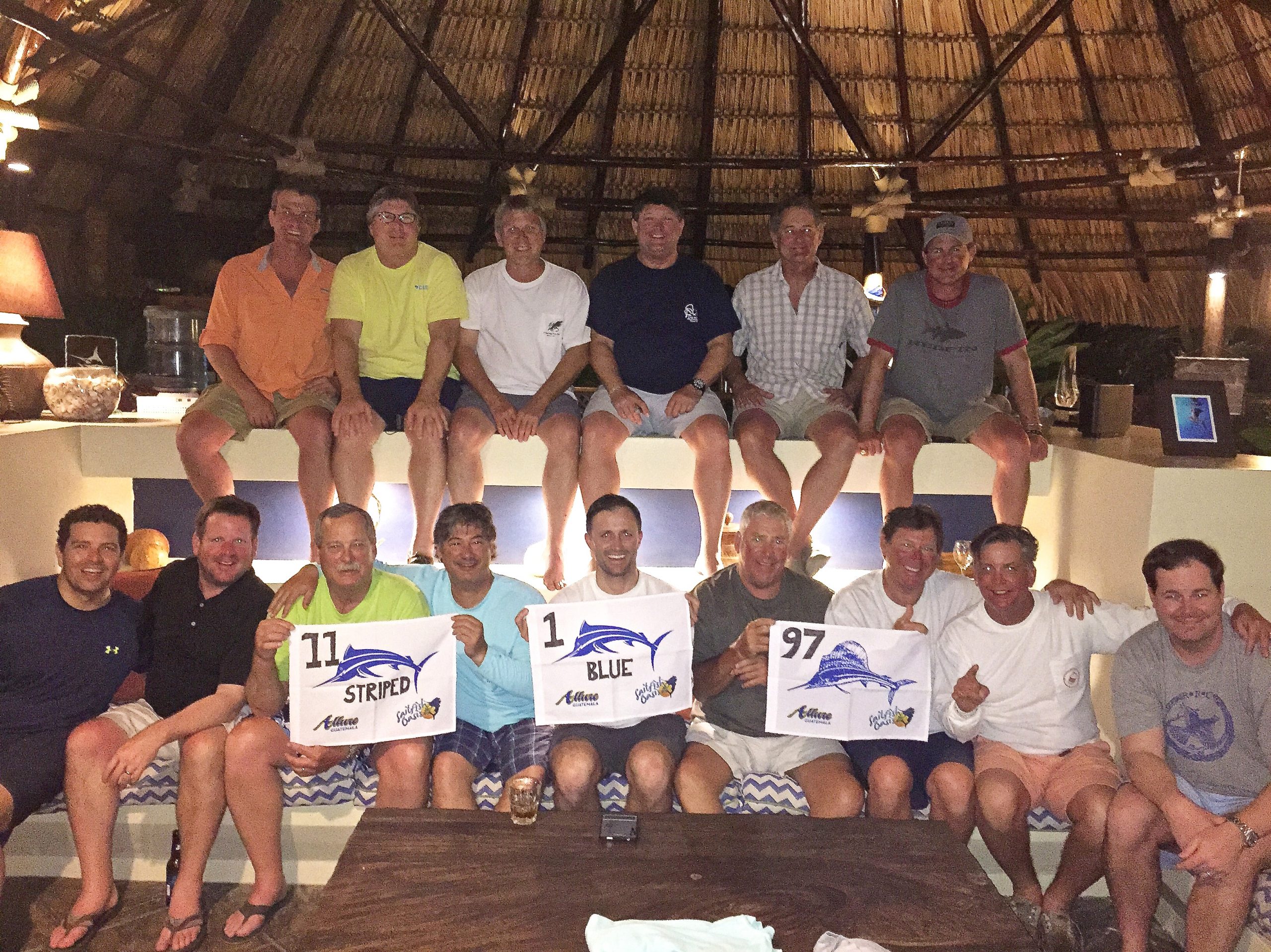 February 3-4-5 good to see the above group back down for Super Bowl Weekend and 3 days of fishing aboard Allure II, Captain Hook, Makina, and Sails Call. Always a good time with these guys rotating boats daily and the fishing was good with the cooler WSW current bringing with it wads of bait, some well fed kind of hard to catch sailfish and something different for Guatemala, a good striped marlin bite. 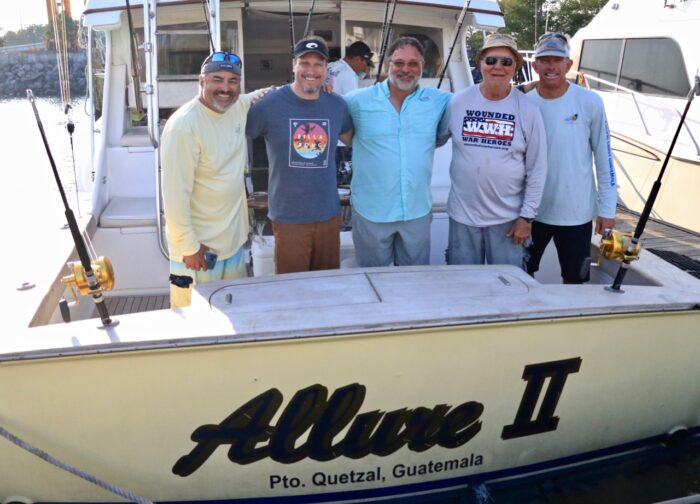 Highlights over the 3 days were a triple header of striped marlin aboard the Capt Hook. On Allure II we got lucky with a Grand Slam… 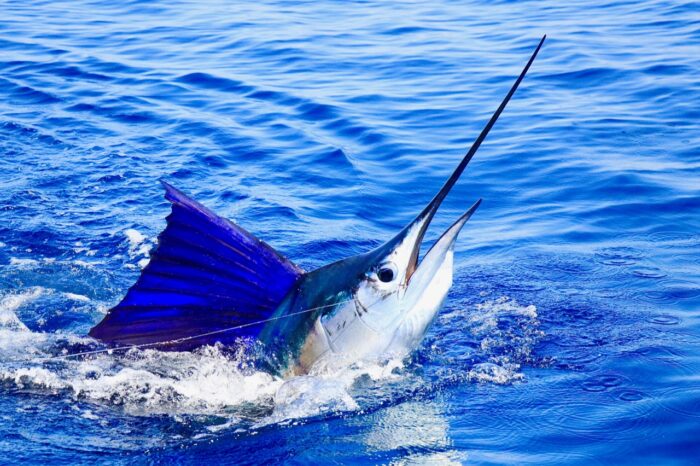 Paul Kennedy with the first fish of the day, a blue marlin tagged and released… 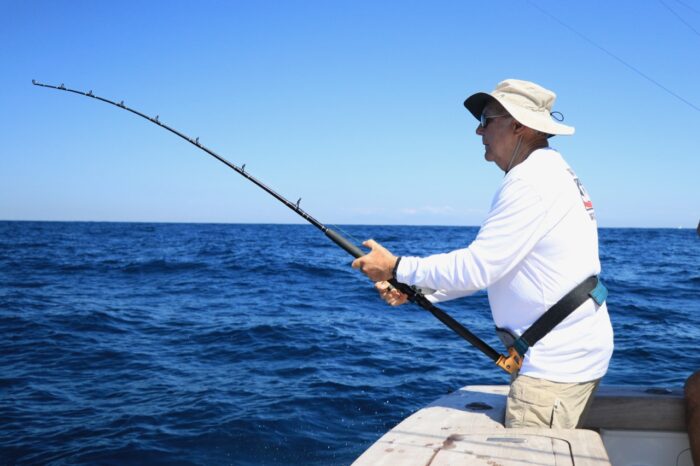 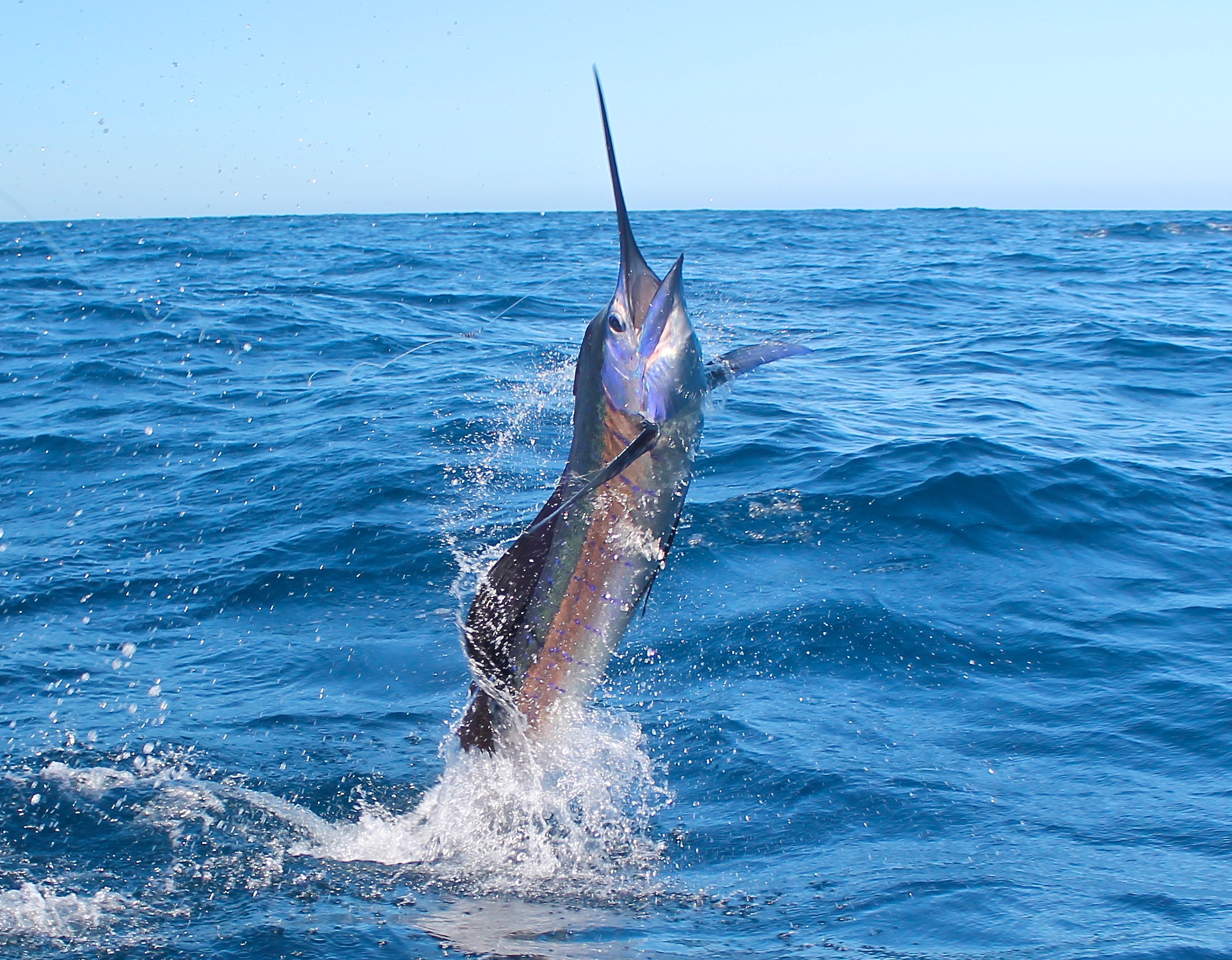 Followed by a couple of these 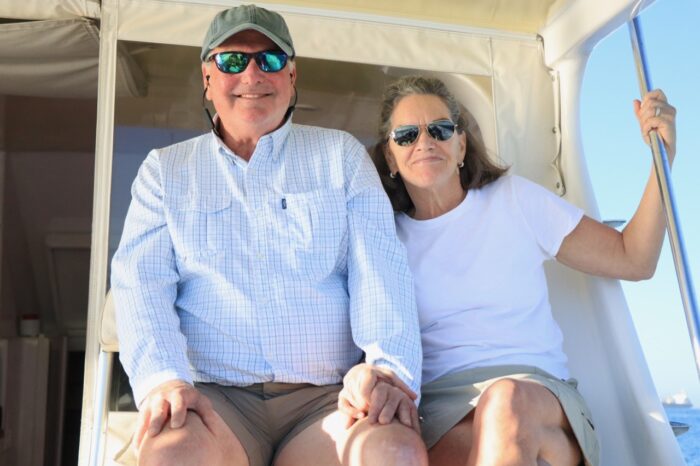 And Capt Tom finished off the day with the stripey to complete the slam.. 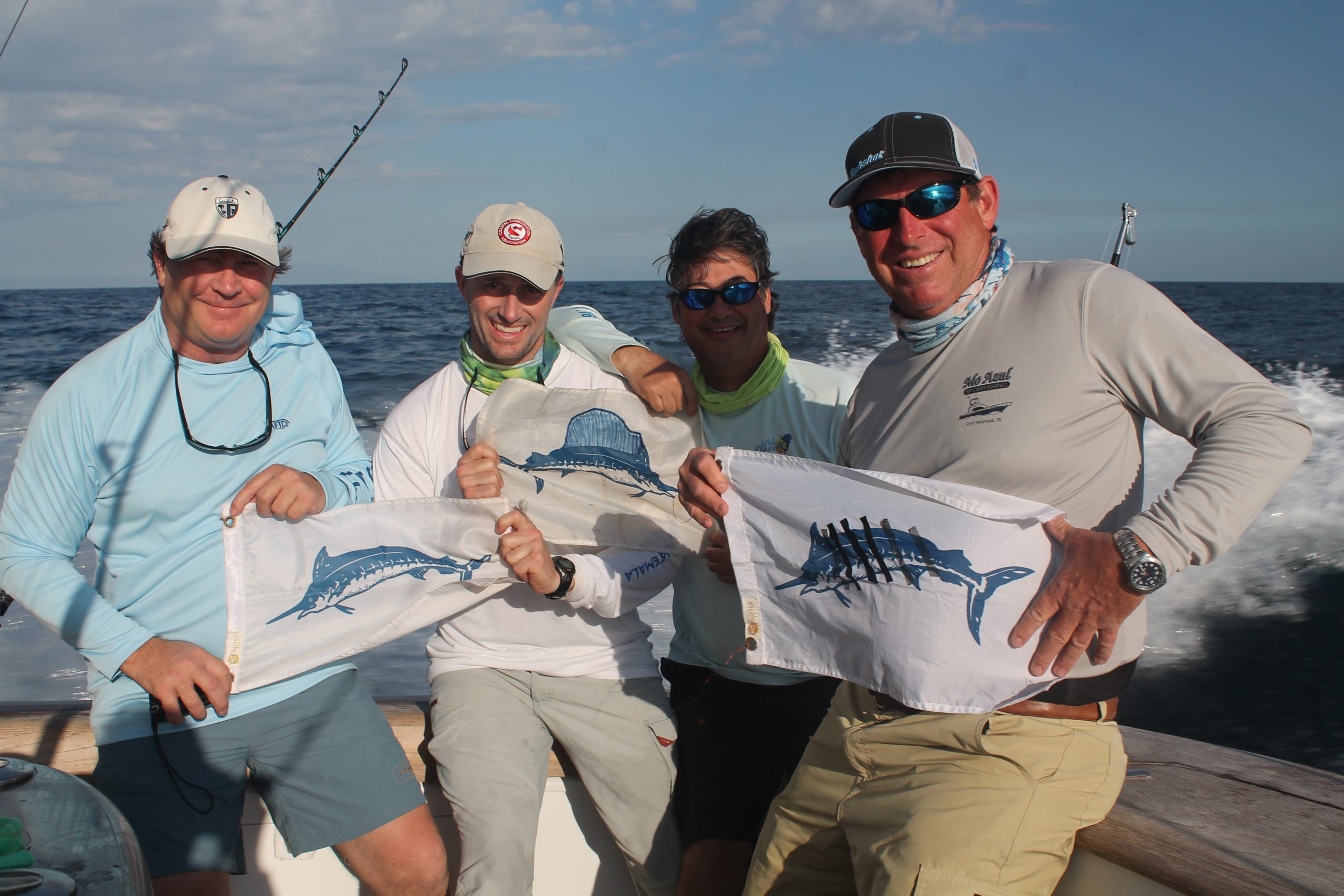 Happy crew on the ride home…

With the most consistent boat out there being the Sails Call who accounted for 32 of the sailfish and 4 striped marlin. Great trip all round for the crew, the amount of sails and stripey’s raised and bites was up there though a lot of soft bites and fish that would tease and not switch. 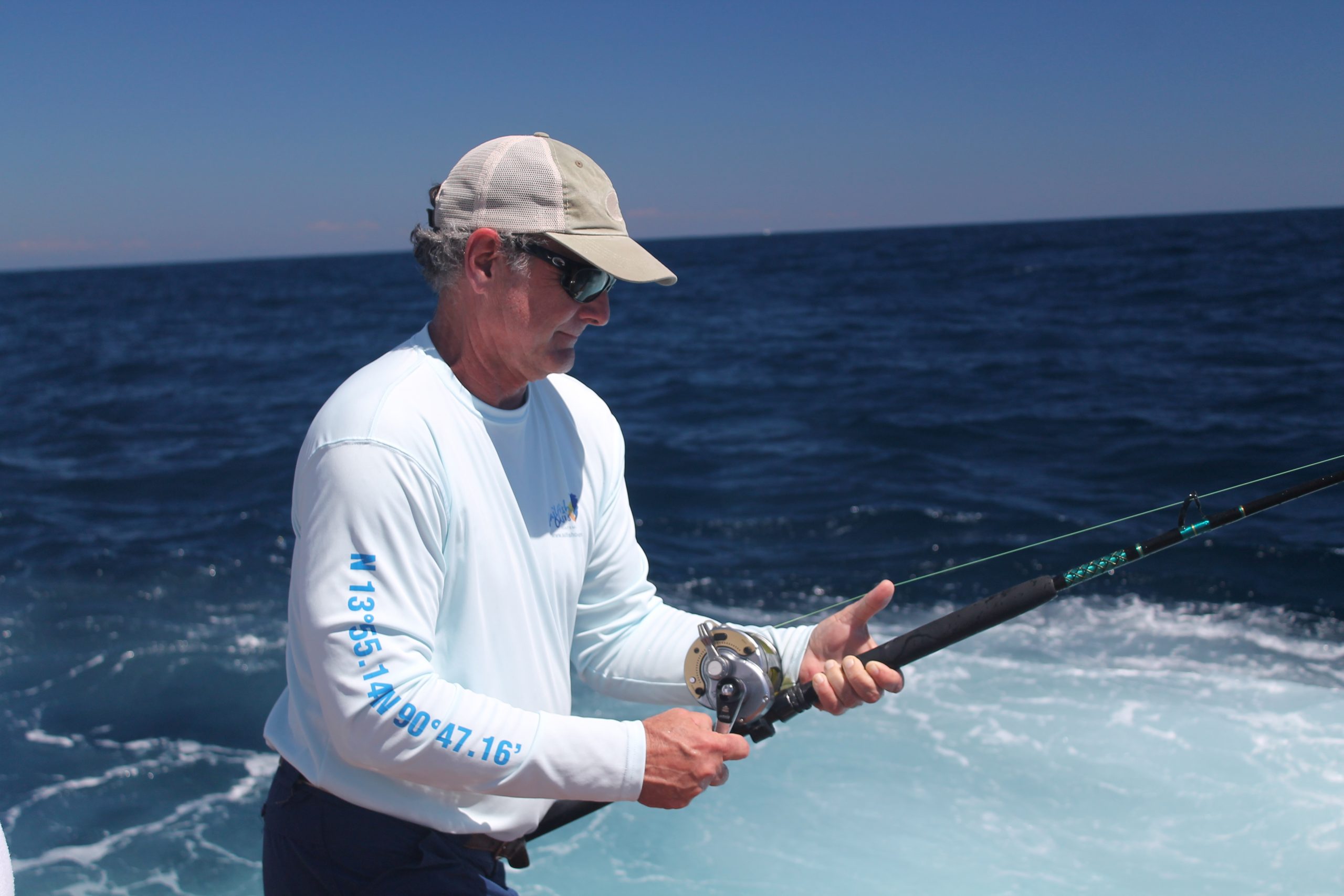 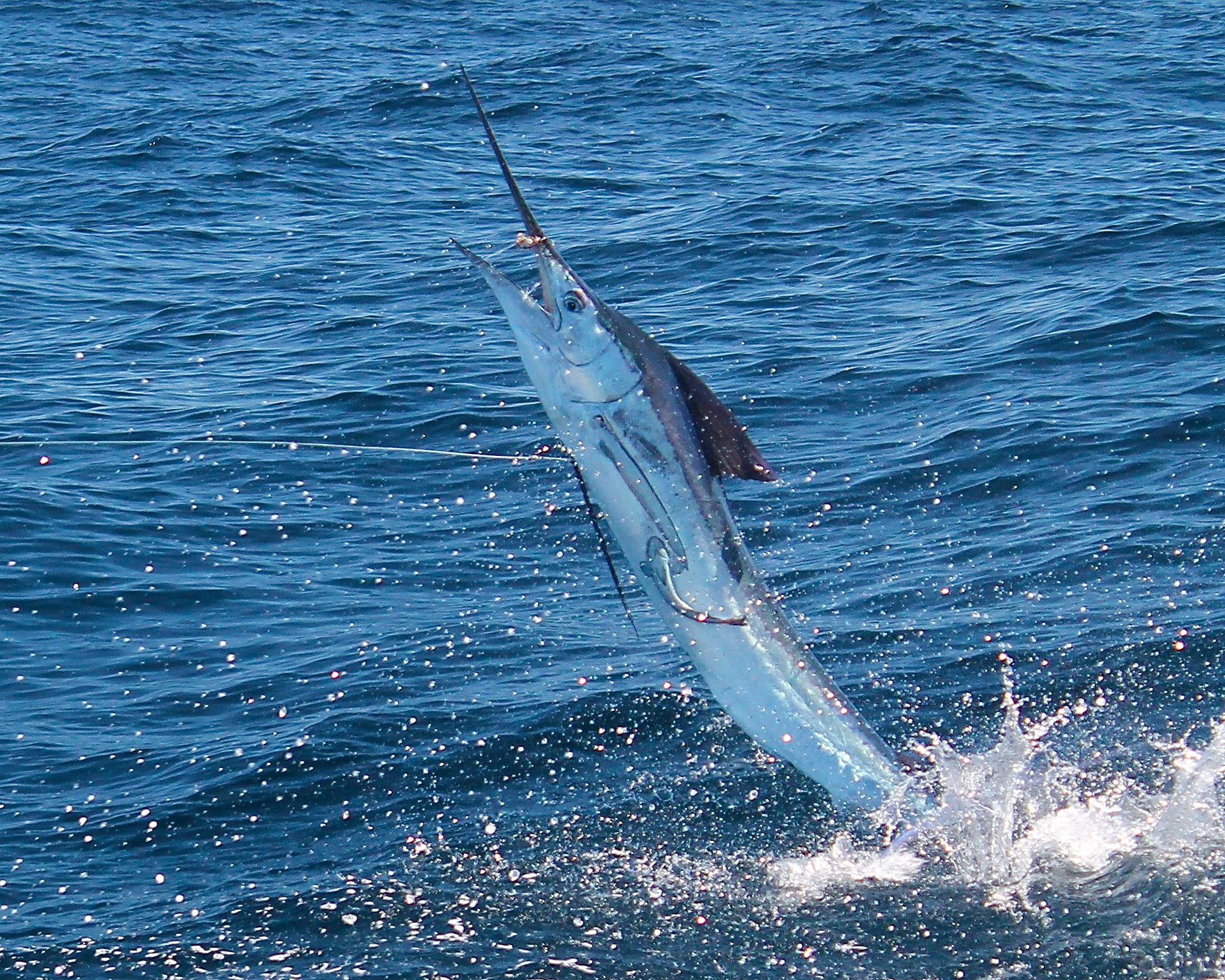 Mike Griffith with his stripey for the trip

The striped marlin bite for the fleet was one never seen before here in Guatemala so it made the trip. Then there was the Super Bowl, awesome game to top off a fantastic weekend! The guys have re-booked for next year which says it all… 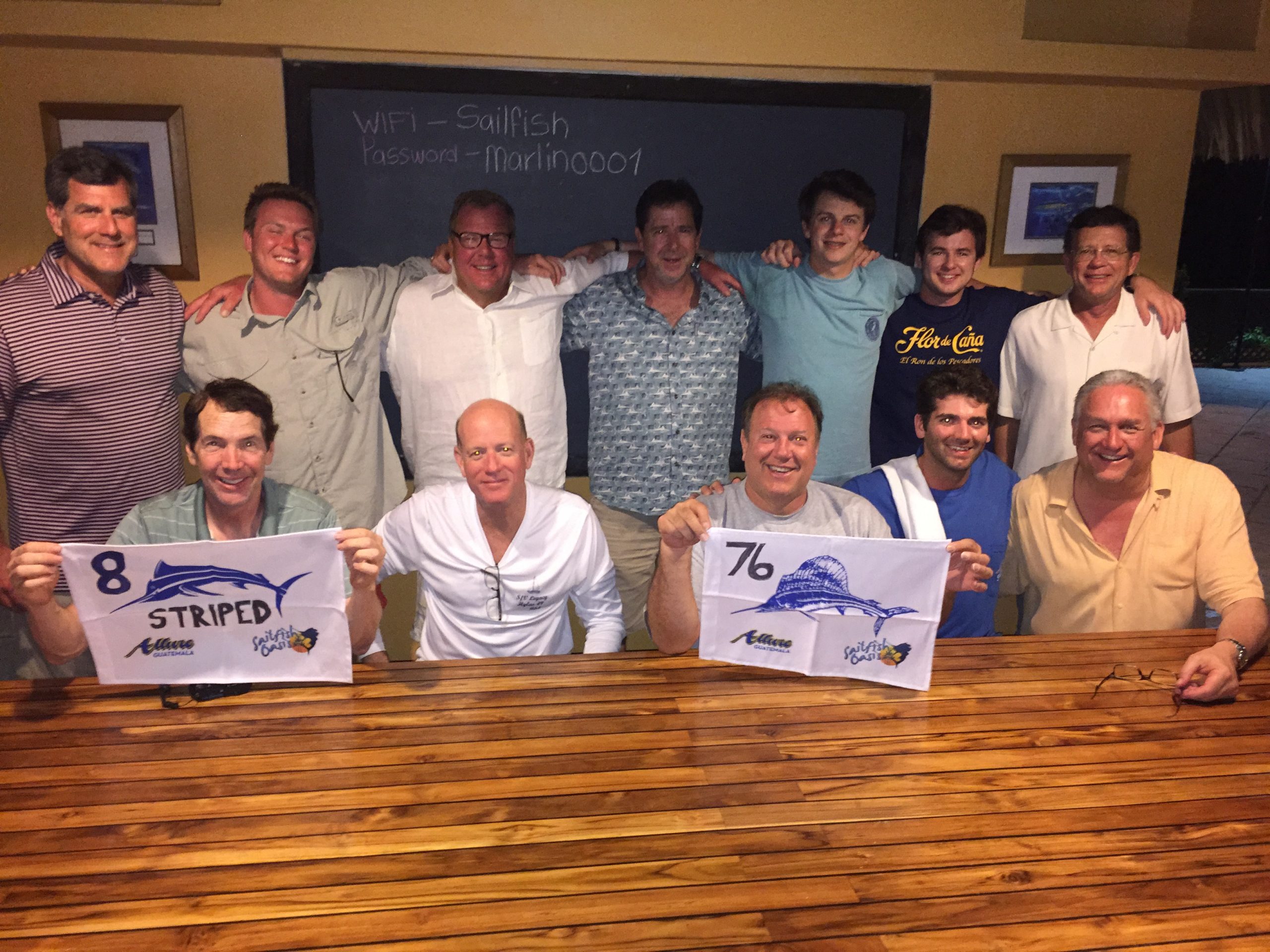 Another hard core group on their yearly pilgrimage to Guatemala

February 7-8-9 good to see the core of this group back with a few new faces……the ‘bite’ wasn’t as hot as their last trip down here though still very good fishing with the sailfish and stripeys still on the chew for the above crew fishing aboard Allure II, Capt Hook and Makina. 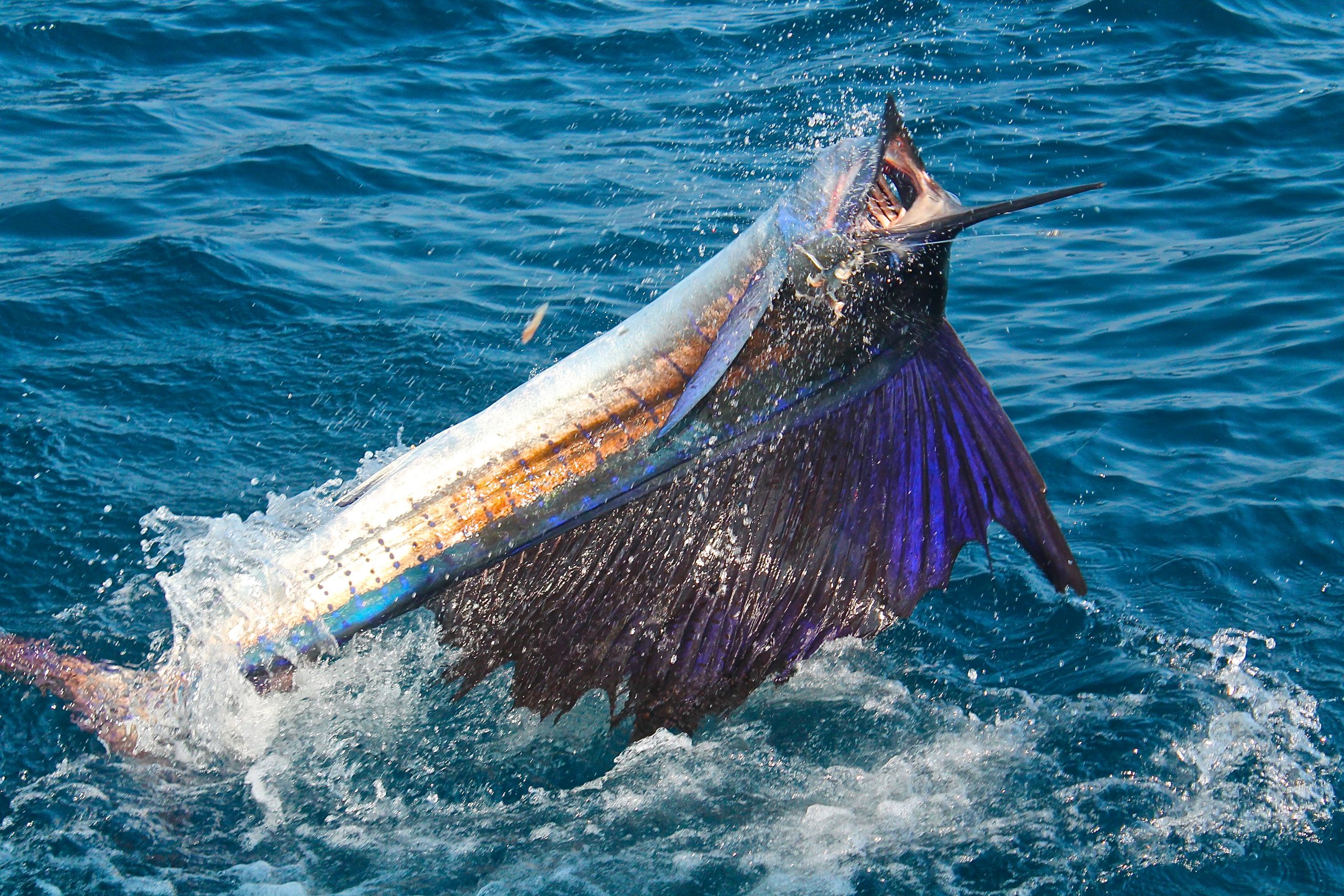 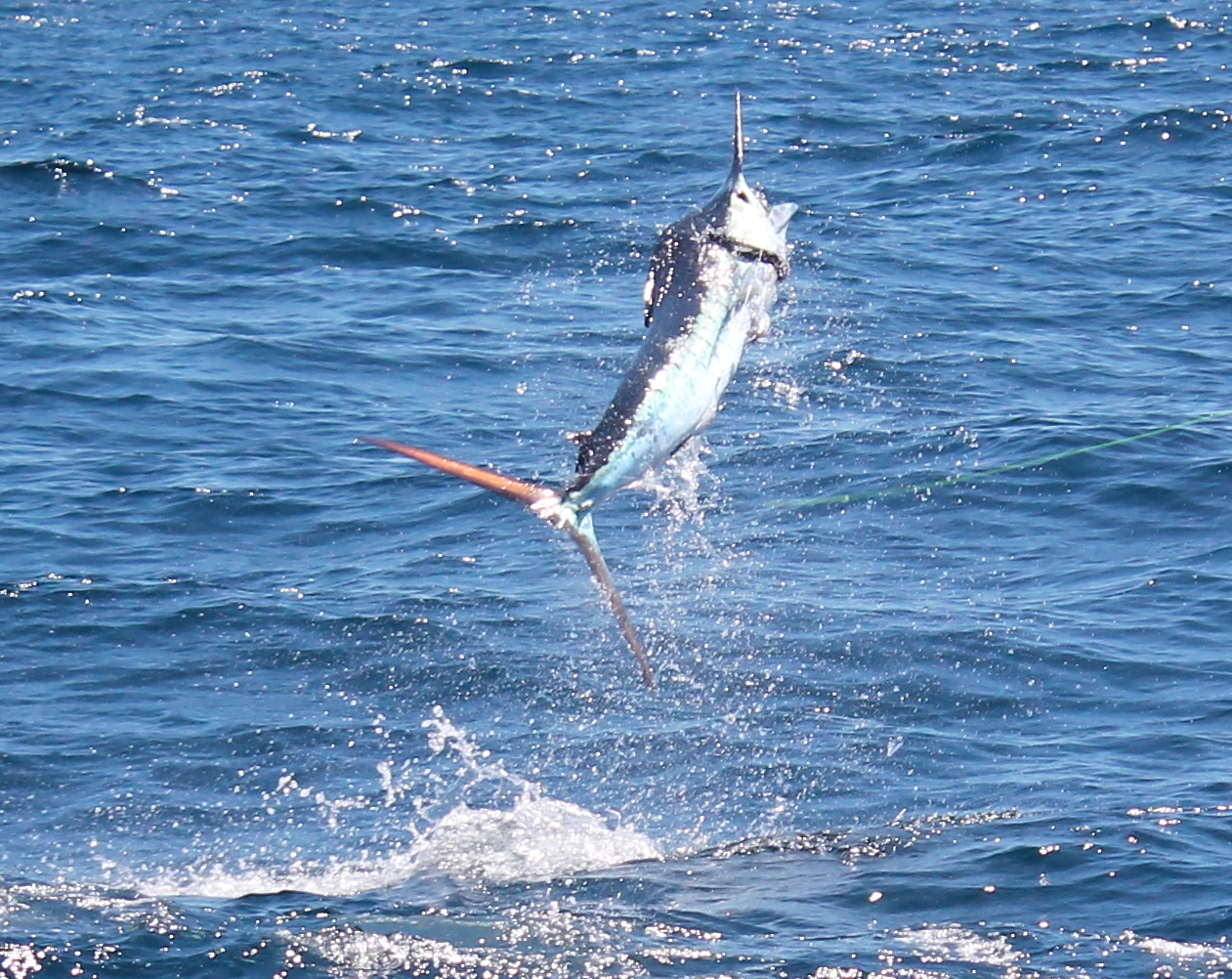 Stripey boat side before release…

Same as our last trip, we raised a lot more fish than the final numbers suggest, there were a couple of blues, several stripeys and a bunch of sailfish missed, some tough fish out there coming in hot though more soft bites. We marked plenty of bait and the fish were throwing up wads of squid. 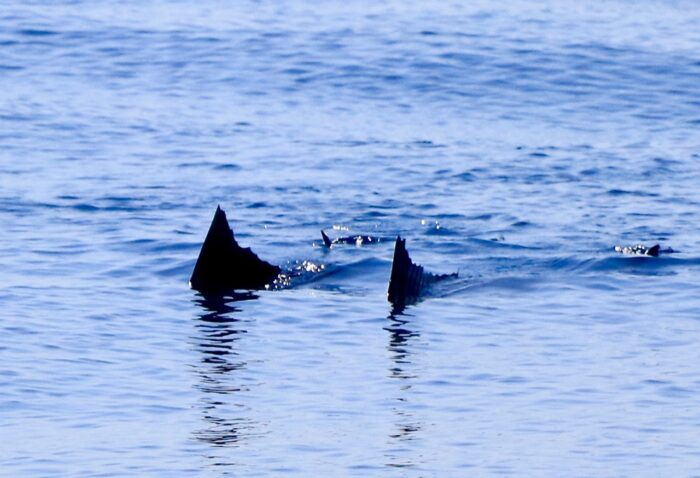 We also got into a few good mahi’s.. 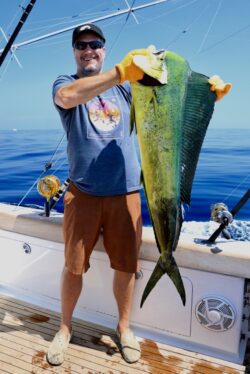 Paul with a beauty

And on the last day the tunas made a showing with 5 boated for the trip including a couple of hefty fish including this fish for the Capt Hook making it to the gaff.. 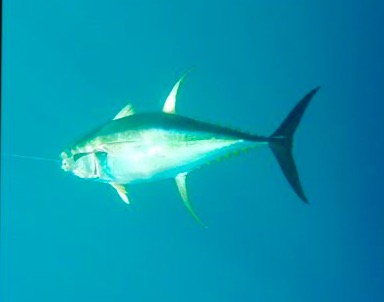 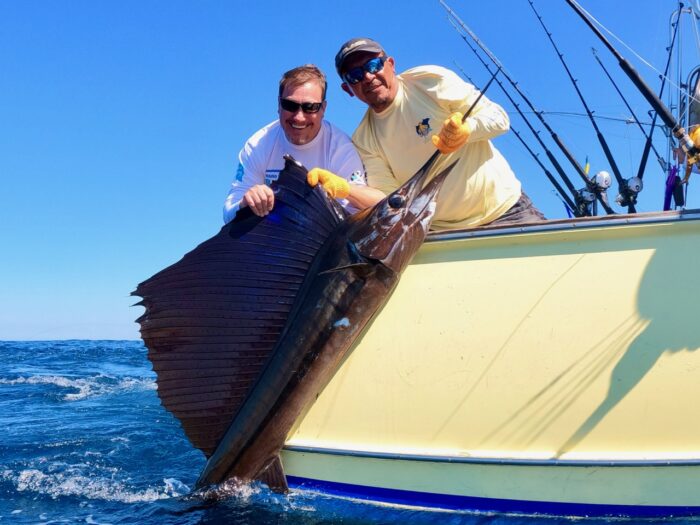 Kip Sowden with the fish of the trip, this XL yellowfin he landed on 30lb tackle.

The fish took him 2, 1/2 hours to get to the gaff on light line and leader, awesome achievement!!! We hooked a large tuna that same afternoon that peeled off all the top-shot deep into the dacron backing on the 80lb outfit only to come unstuck after getting our angler settled in………

All in all another great trip to Guatemala for the Aud-Sowden group and they have re-booked for next year as well.

We had a last minute cancellation on a 5 day trip so time for some boat maintenance the last few days on Allure II. We did have another group through the Lodge fishing the Piragua with Capt Manolo Feb 12-13 and they released 12 sailfish from 20 bites. There was a large body of green water out there that slowed things down though the blue water is pushing back in and we hope to see the bite pick up in the coming days. We’re back out on Wednesday and looking forward to it. It’s been a different season for sure with the striped marlin bite the last couple of weeks making life interesting, seeing those stripey’s come into the spread with the lights on is something else. We are booked up through end of March, April is starting to fill up though there are still some dates available so get in on them. Traditionally the blue marlin bite heats up as we get into summer….and don’t right off summer here in Guatemala. The fish bite right through the year with great variety out there. Get in touch: