We’ve been getting out over the past few months and the fishing has been very steady with blue water in close for the most part and settled weather. Rain in the evenings and beautiful calm not too hot sunny days making it perfect to get out offshore and amongst it. Most recently we had through the lodge:
LIVING WATER GROUP AUGUST 17th and 22nd AUGUST. 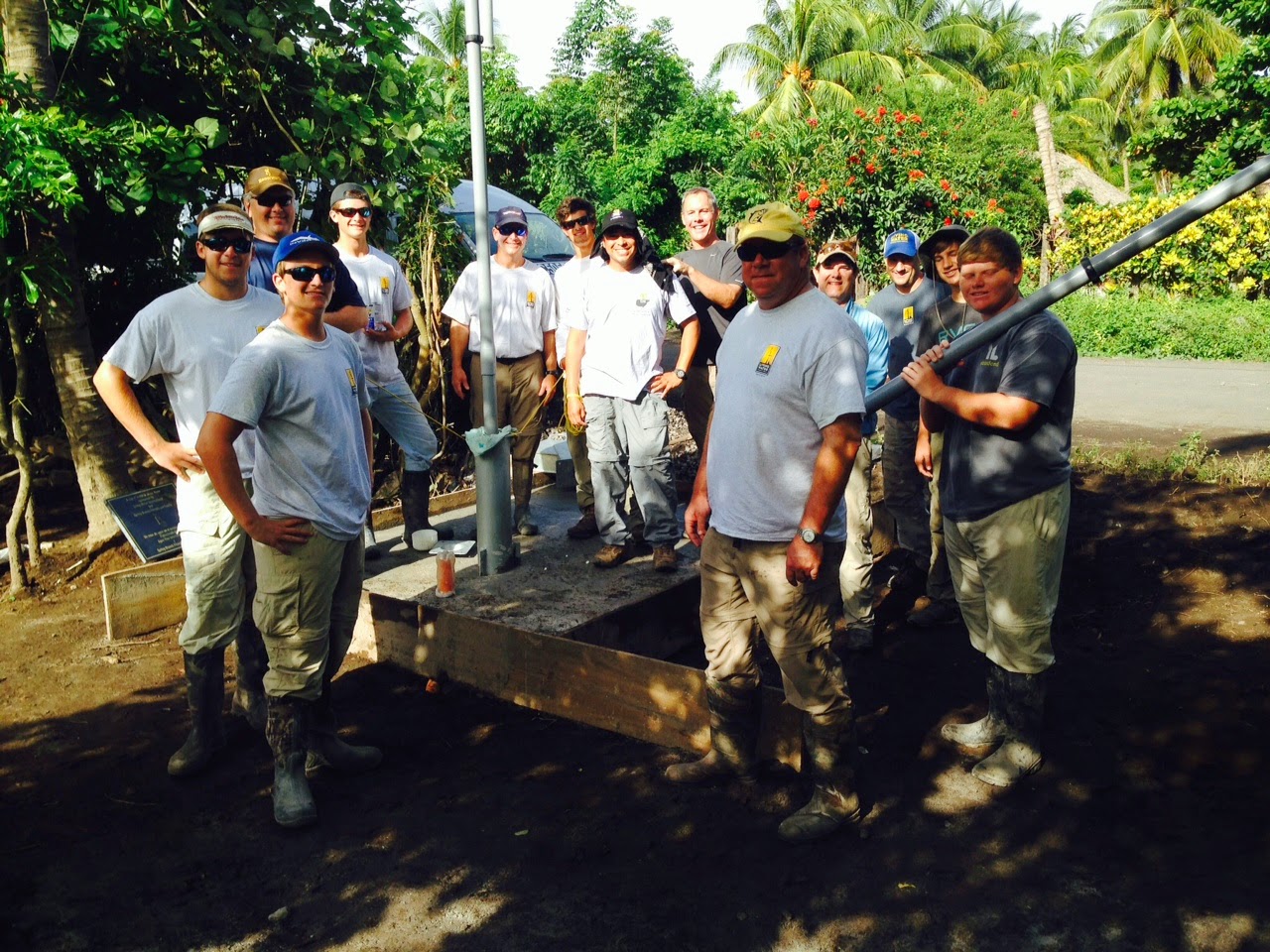 From Houston, Texas we just said adios to the father and son ‘Living Water’ team of  Bo and Rob Herrin, Mark and Jack Nini, Dave and Jackson White, Ray and Quin Stroube and Matt and Michael Pletcher. The group came down donating and drilling a water well for the people of Santa Sofia in the  sugar cane district of Mas Agua through the NGO Living Water. Living Water locates the villages most needy of clean drinking water and these guys donated their time and money into buying and drilling the well. All in all one of the best NGO’s around and they left this village with a hand pump which can deliver 5gal of clean drinking water a minute. Much needed and very much appreciated by the people of Santa Sofia.
While down here they squeezed in 2 days of fishing on both boats, Allure and Allure II and experienced some great fishing with 40 sailfish and1 blue marlin released and a few mahi’s boated!!
The total numbers for the group from both boats was 62 sailfish raised, 56 bites and 40 sailfish releases with 3 blue marlin raised and 1 release from 1 bite on blue marlin, a nice big fish of around 400lb’s!! Throw in a few mahi’s and an excellent trip in all ways for the guys. 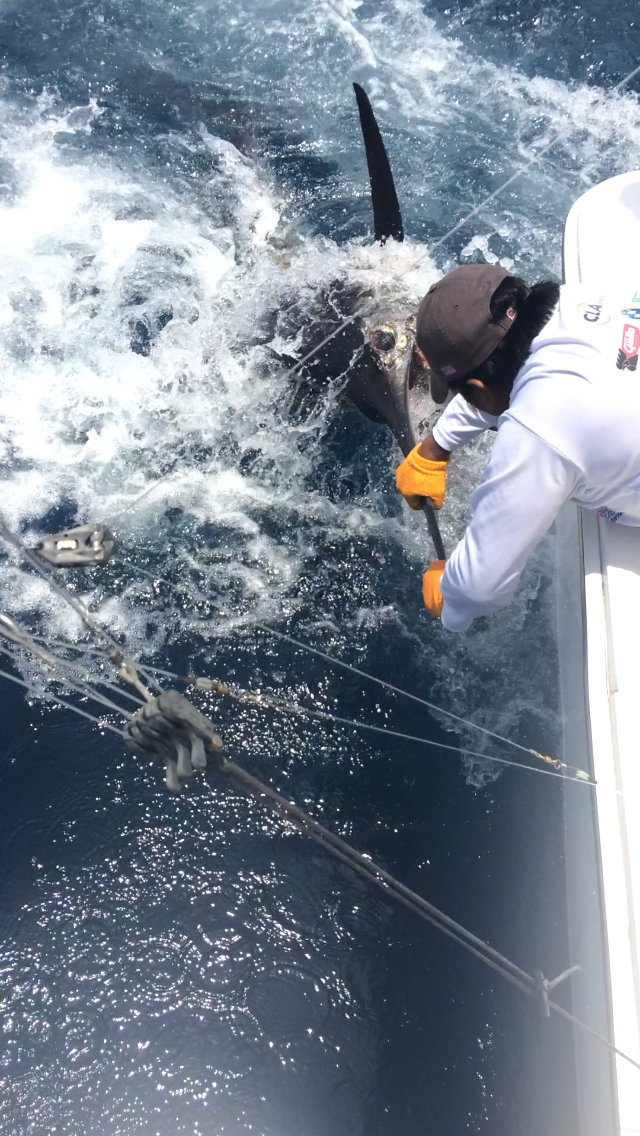 Nice blue for the son’s fishing on Allure.. 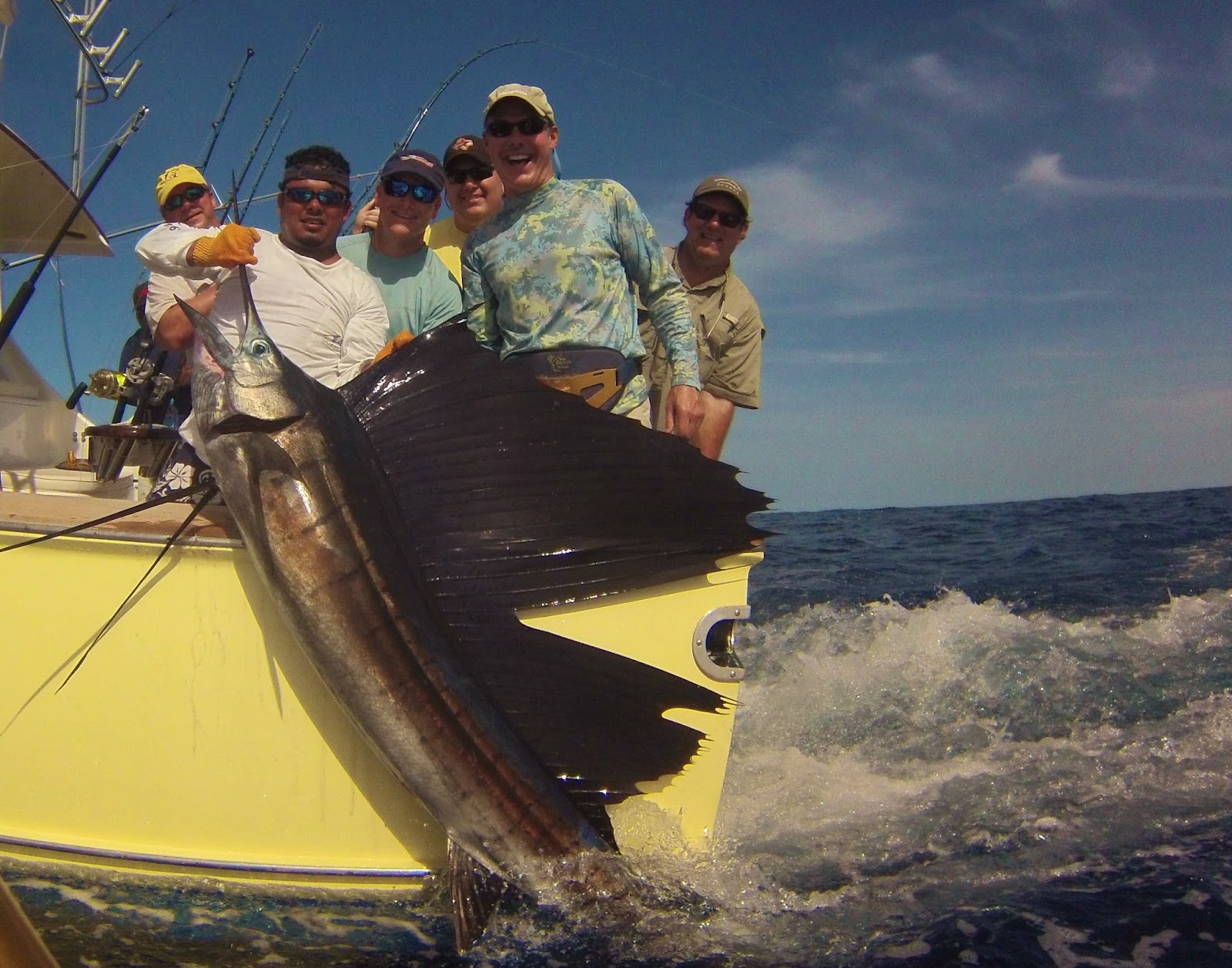 Sail for the fathers, Bo Herrin in the background loosing line on the 2nd of a double header! 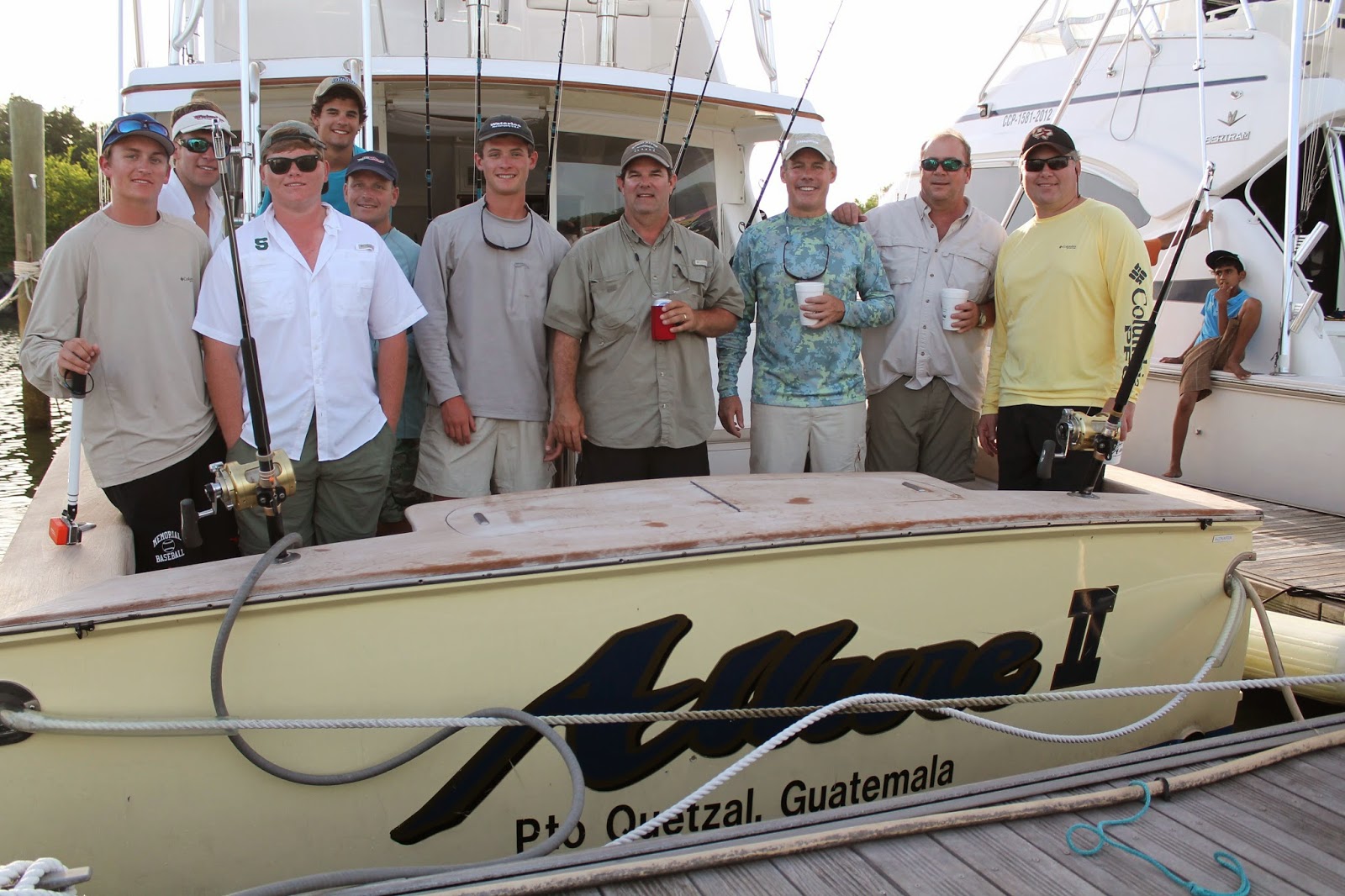 L-R Jackson White, Rob Herrin, Quin Stroube, Michael Pletcher, Dave White, Jack Nini, Matt Pletcher, Mark Nini, Bo Herrin and Ray Stroube.
FITZGERALD & CASSIDY GROUP, 4th AUGUST.
Friends from New Zealand, Jock and Rowena Fitzgerald with daughter Kirsty and her husband Michael Cassidy finished off a tour of the Americas with a few days in Guatemala. We managed to find some time to get them out on the water for 4 hours of fishing and it proved to be one of the highlights of their trip! Just 12nm off the coast we were in the blue water and in over 1000ft of water and into the fish….. 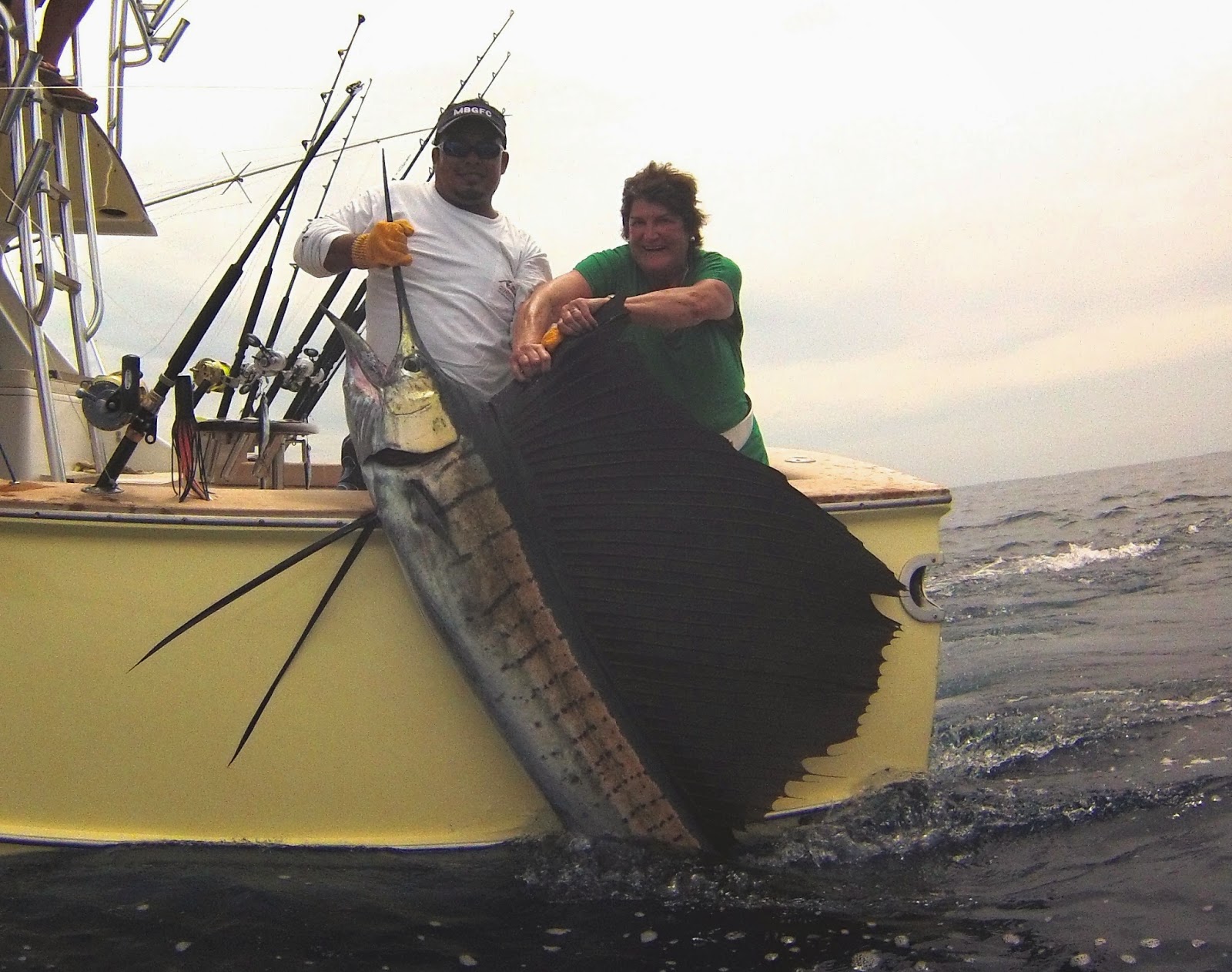 Rowena with her first ever billfish…
In the 4 hours we raised 13 sails got 10 of them to bite and released 6, we also pulled the hook on a nice mahi. Not many places in the world you can shoot out for a quick fish and release 6 billfish!! 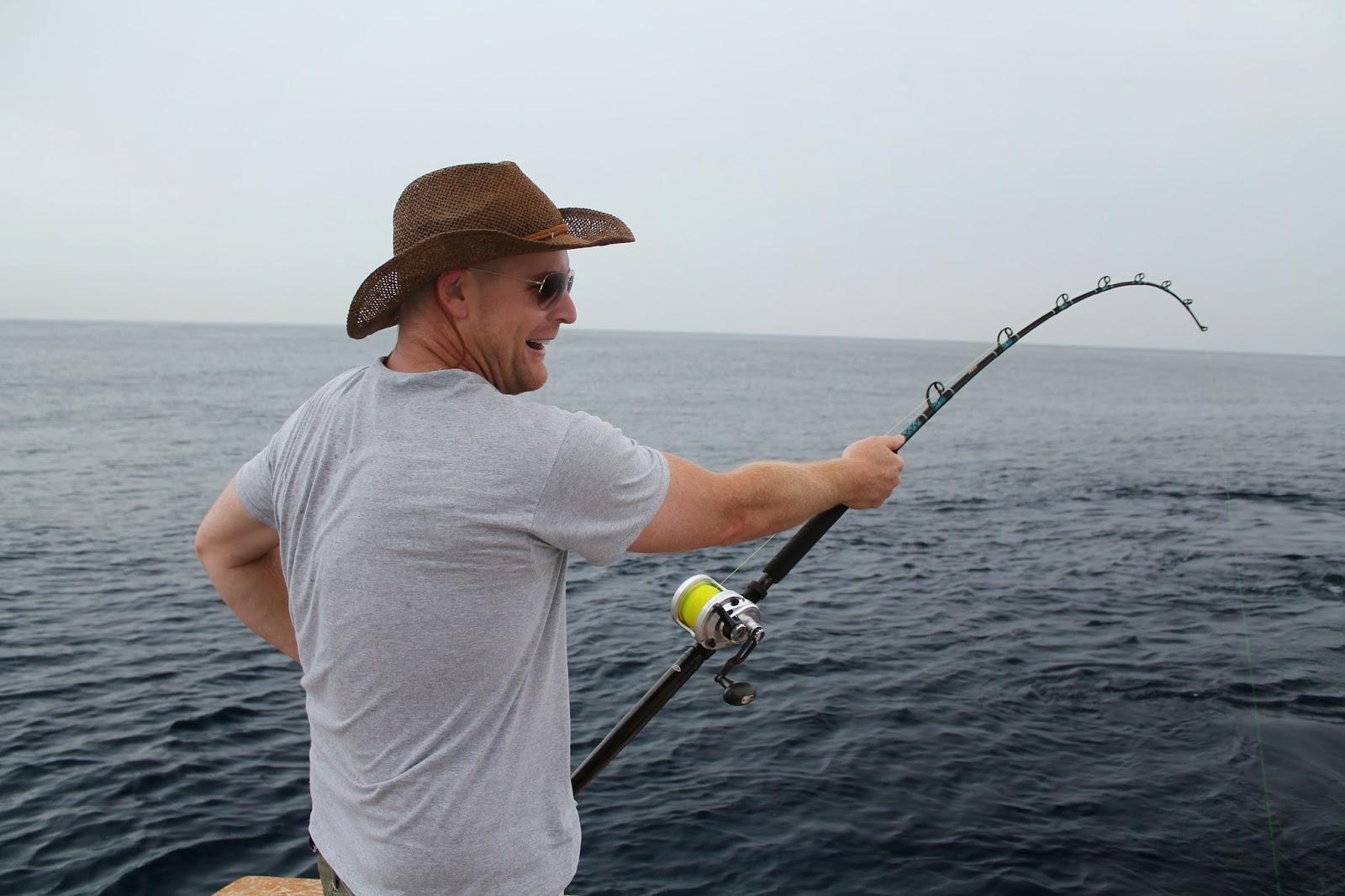 Michael Cassidy with a tough one!
We had a great couple of nights down at the lodge and showing them around the sites and sights of Antigua, their only regret was not allowing enough days for this part of their trip! Good times… 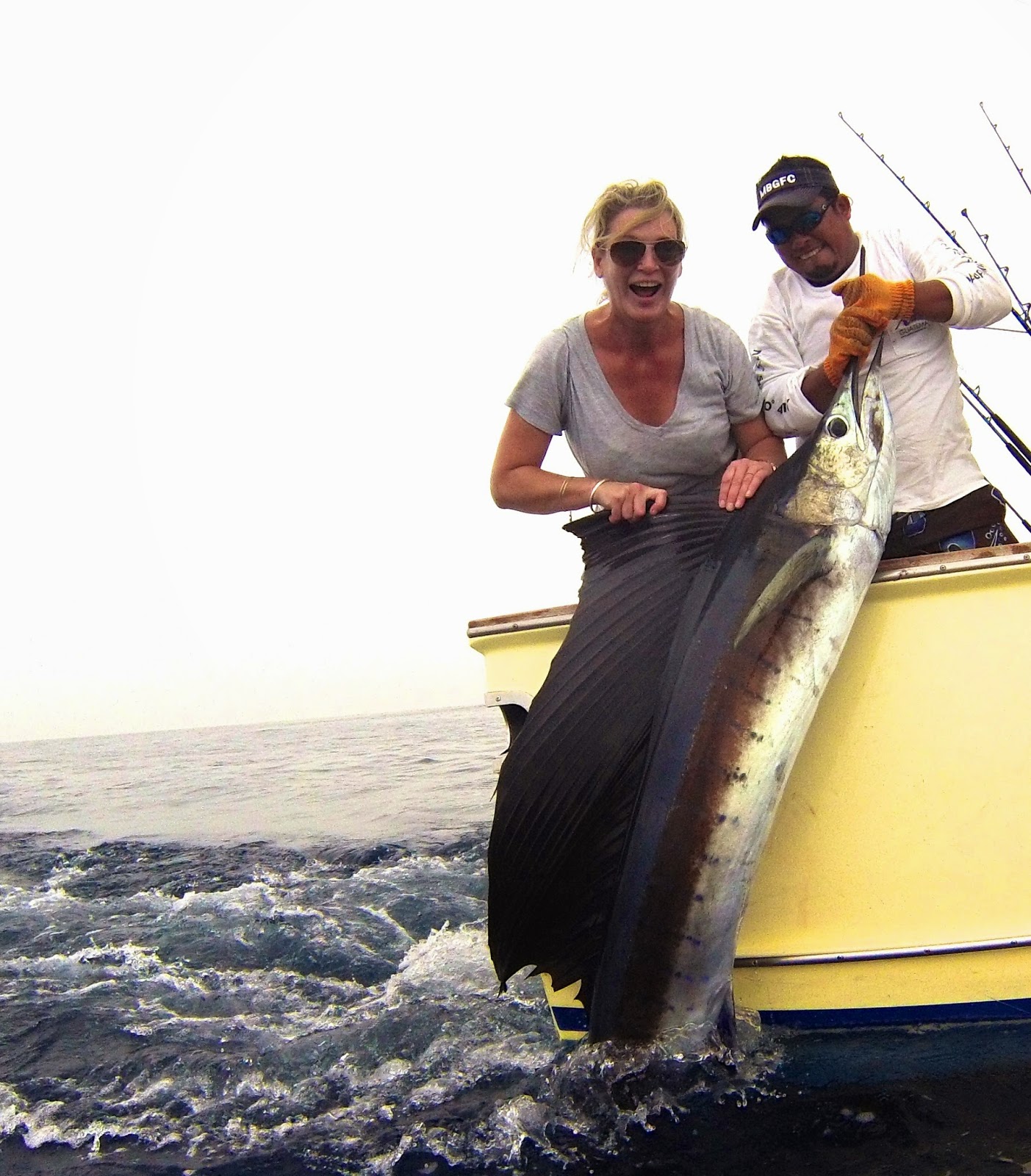 And Kirsty with another first.
PERSIA BACHELOR GROUP, 2nd AUGUST.
Down for a couple of nights at the Oasis and a day of fishing offshore we hosted the Edward Persia group for his bachelor weekend. The guys got some great fishing in and had a blast down at the lodge sampling some great tequila’s and of course the finest rum in the world. 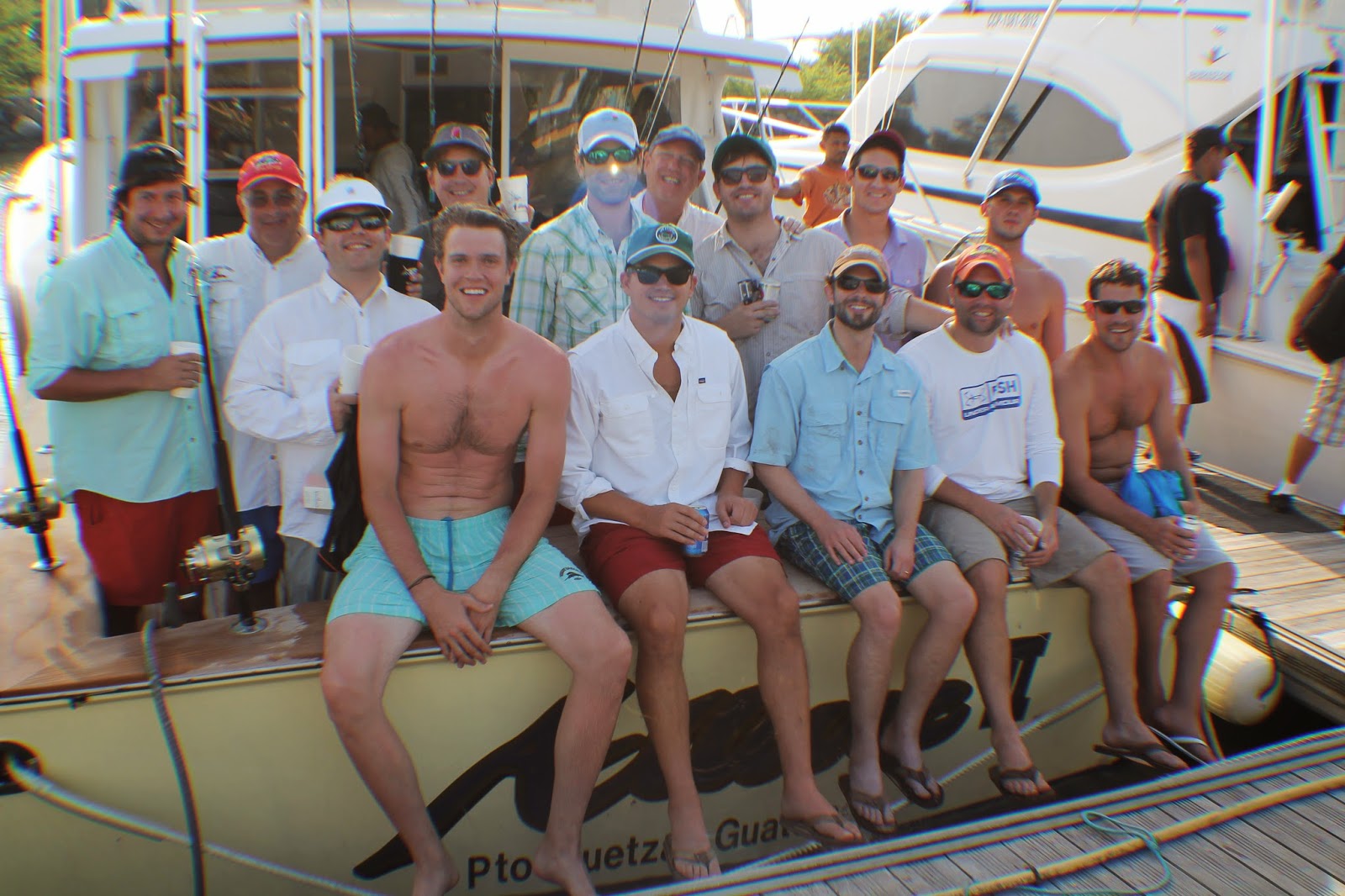 Fishing aboard Allure, Allure II and Spindrift the day was set for a mini day tournament. Fishing was steady right through the day with 22 sails released 1 blue marlin and 6 mahi’s boated. From there it was back to the lodge for another large night and the following day up to La Reunion for a day of golf, then on to Antigua for a night at the wonderful Casa Santa Domingo and a night out sampling the finest mezcal in the world, Ilegal down at the Cafe No Sé. Perfect bachelor weekend, good times with everyone commenting so!! 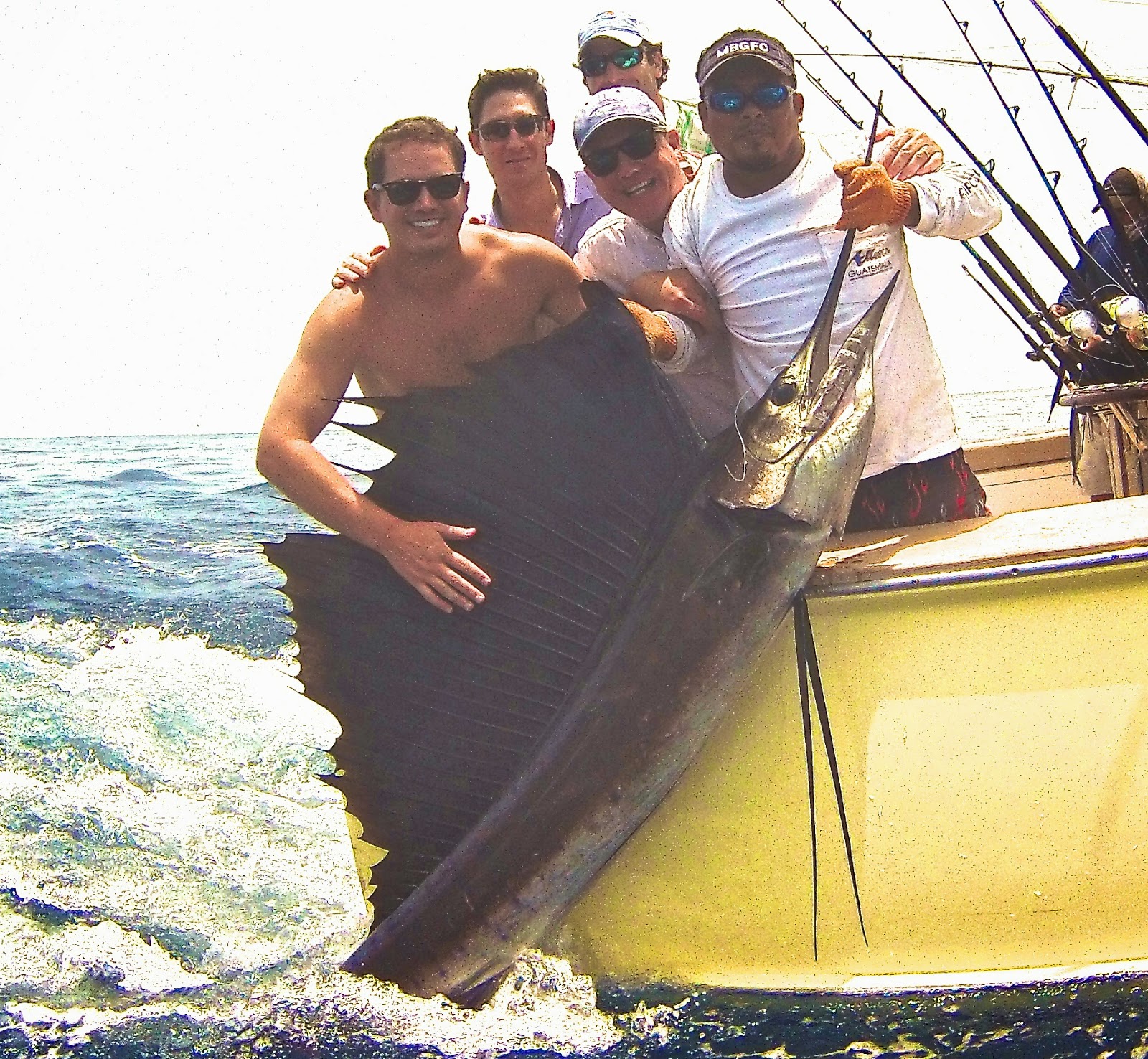 Edward and dad Michael Persia with Scott and Mark.
July 12th we hosted a local group from the City for a one day charter, the blue water was still in close at the bottom of the pocket and the fishing was great. These guys released 8 sailfish from 12 bites, 1 blue marlin from 2 bites and boated 16 mahi mahi! Awesome day… 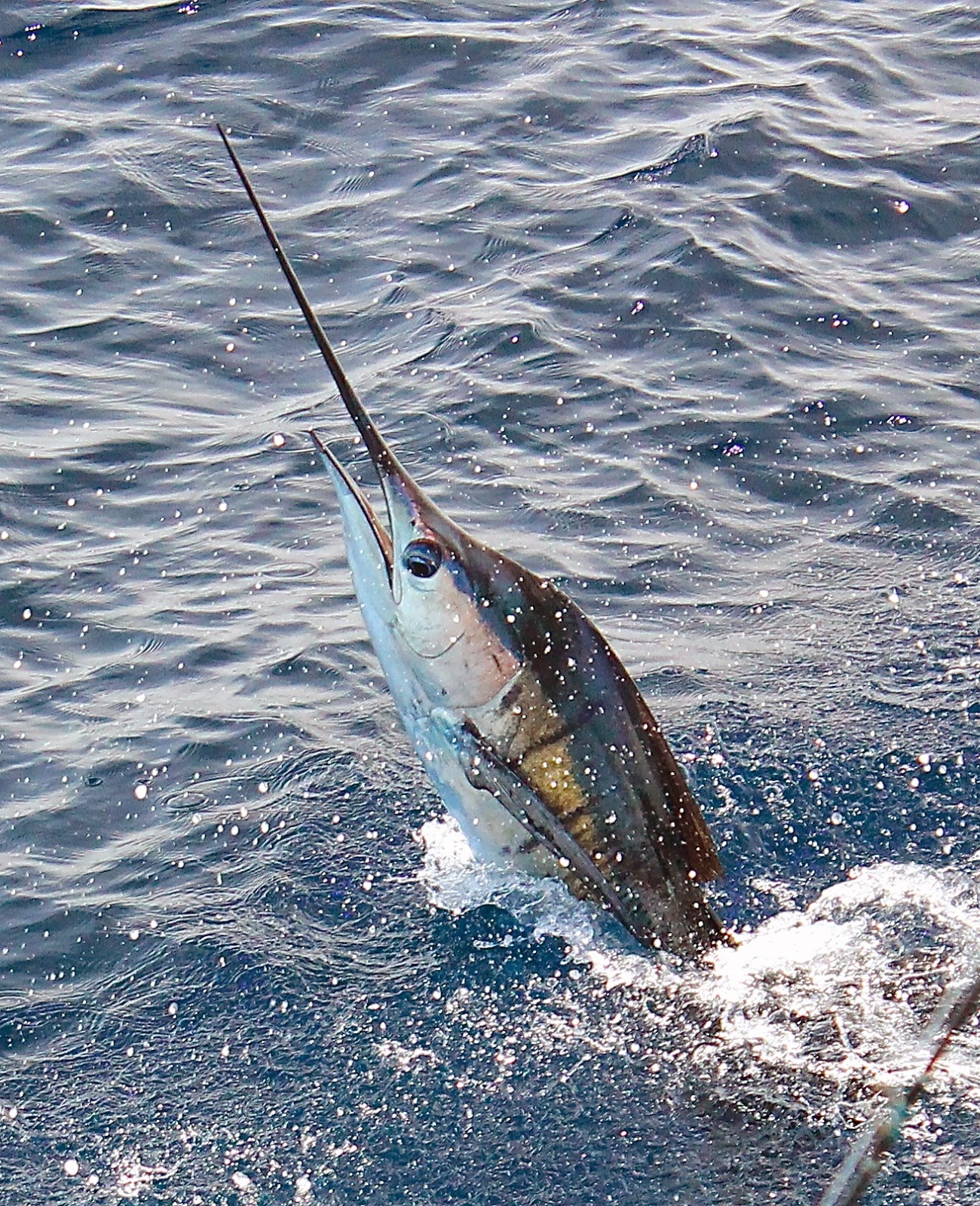 Blue Marlin.
29th of June we had another one day charter here and in the same spot the fish were snapping with 26 sails raised and 15 releases from 23 bites! All just 10-12nm off the beach, as it has been for most of the summer months.
June 27th, with the fishing being so close we took out friend George Carver with the idea of trying to release one on his 10wt flyrod. With the teasers in at just 8nm it wasn’t long before he achieved his goal…. 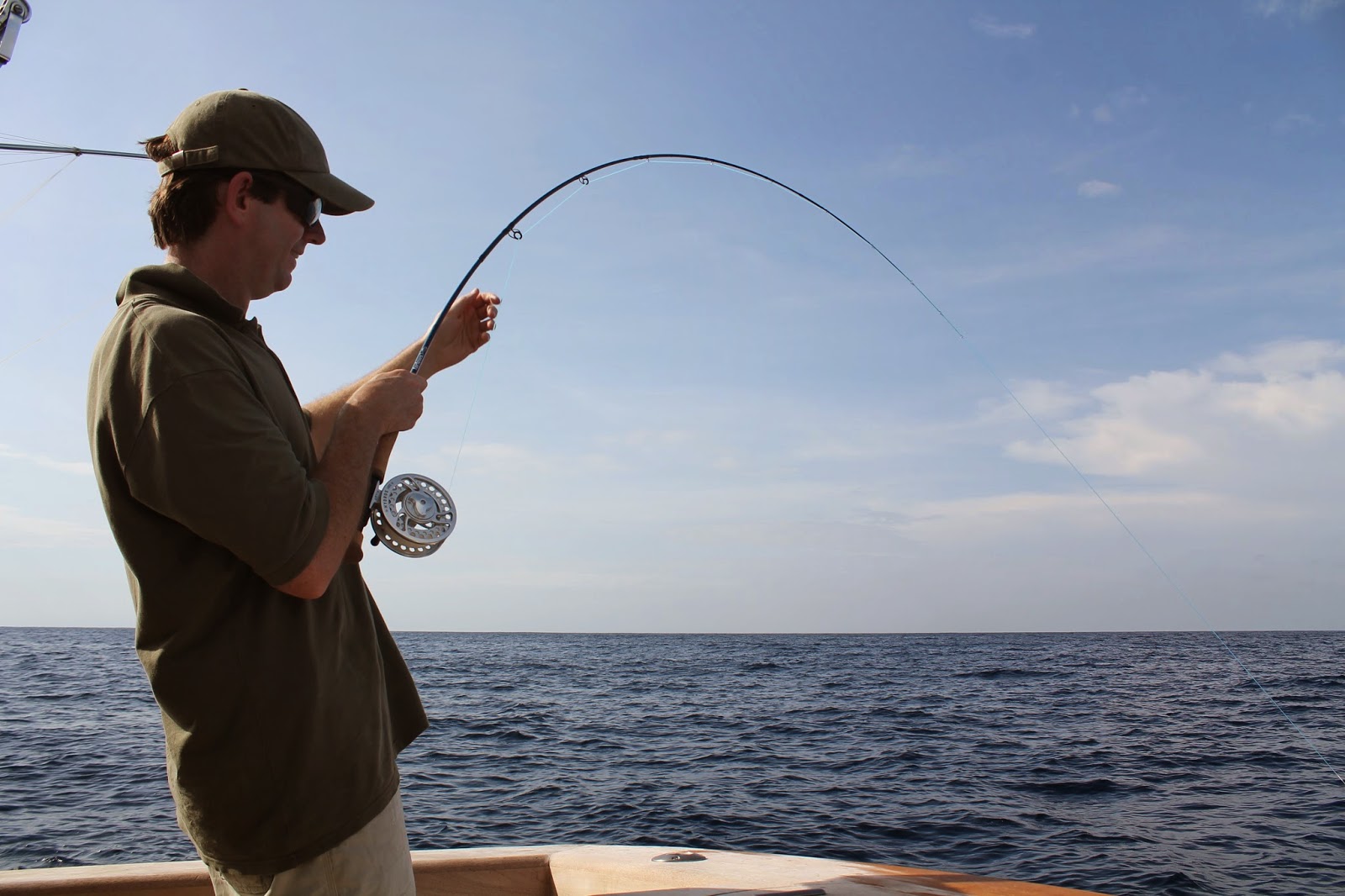 George putting as much heat as you can on a 10wt!
After that it was back in to try for a rooster fish on the fly at the barra….no luck there though we got the one we wanted!
June 20th-21st 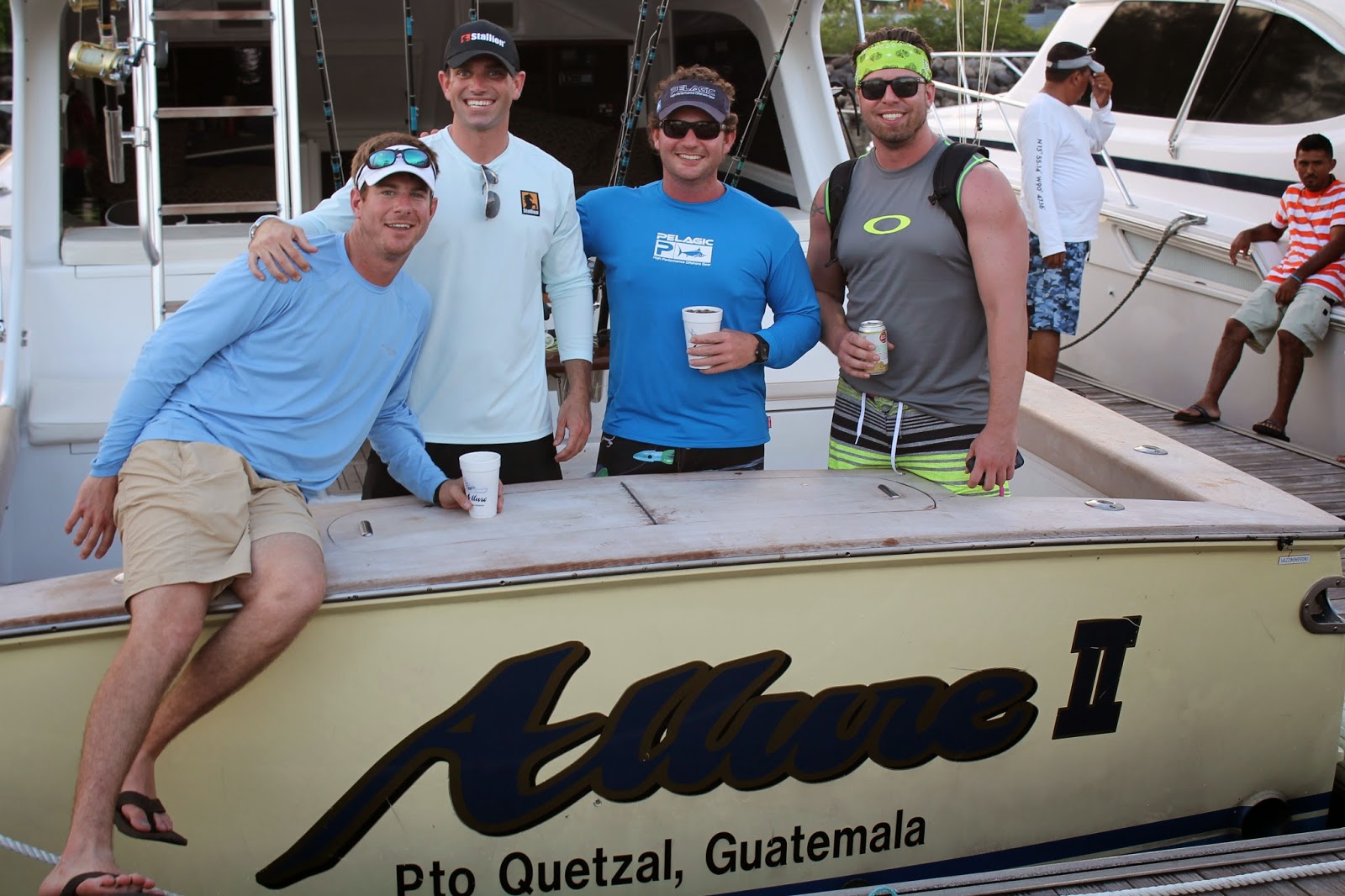 Stu Stover, Charlie Hansen, Jean-Paul Michel and Spencer Morgan
We hosted these guys for 2 days on the water here, the fishing was a little slow and we worked the bottom of the pocket as well as checking out wide. Plenty of deep blue water out there though the fishing proved better back inshore at about 10nm. 16 sailfish from 26 bites is still good bill fishing and plenty of mahi’s as well topped it off. Another great june trip for these guys and we’ll see them back here next June!!
For the supposedly ‘off season’ that is some pretty good steady fishing especially seeing that a lot of these trips were just one dayer’s, which means just a day to find the fish! For the most part the fishing and the blue water has been close. Over the past couple of months we have fished 10 full days and 2 very short sessions with 105 sailfish releases, 3 blue marlin and plenty of mahi’s. If you’re thinking about coming down in these months next year, don’t hesitate, that is an average of over 10 sailfish releases a day and a better than average shot at a blue!!
We are starting to take bookings for the coming season and through to 2015, be sure to get in touch with us to secure your dates as they are starting to go. The lodge can accommodate  20 and we use  only the best boats and crews. Don’t forget November and December have consistently seen some of the best fishing as far as big numbers go over the past 11 seasons we have fished here, great months to get down to Gutemala!!!