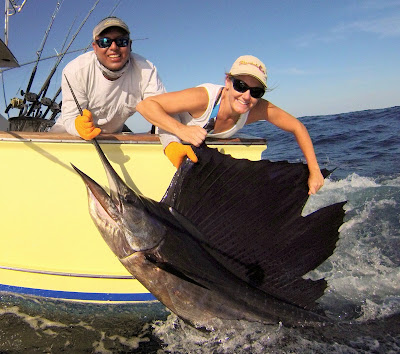 Nice big sail at the end of day one

From Thankgiving day on through Saturday the 30th we fished with solo angler Amanda Thompson. A super keen fisho she has spent time this year in Cape Verde, Nova Scotia and on the Reef in Aussie as well as Alaska! This was her second trip this year down to the Oasis fishing on Allure. Our first day out we found some nice water out to the west and worked the drop off out there hard, good conditions though nothing much going on out there. A move back in-shore to 400ft of water and we started to see some fish at the end of the day raising 7 sails and Amanda did a great job missing just one fish going 4 from 5 bites.
Friday 29th, with the current pushing to the east and everything seeming to move that way we started about 10NM to the east of where we had finished off and were soon into a few bites. With the big cold front pushing down from the US through the Gulf we had a stiff ENE wind blowing the whole day. The afternoon doing the opposite of what it normally does here in Guate and picking up even harder and making conditions sporty out there. We worked the area hard and the fish were biting steady through the whole day. Keen to hone her skills pitch-baiting off the teasers she did just that missing just one fish off the teasers and that one threw the hook jumping, the other misses came off the long rigger baits and mostly because of multiple hits. 25 fish up in the spread and 21 bites today with 16 releases, an awesome day and great percentages in trying conditions!! 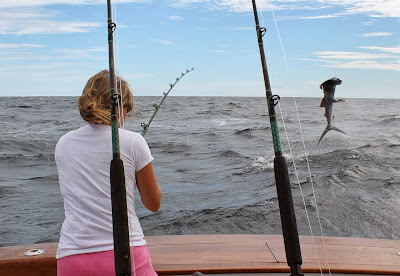 Great shot from day 2
Our last day out we mixed it up as she was keen to give it a try on the fly rod, her first try saltwater flyfishing. We moved further to the east and more to the middle of the pocket today, the current had started to push more off-shore and it wasn’t till later in the afternoon that we found the fish. In the morning session we raised a few sails though they were hard to tease all the way in. Our first fish of the day was a 20lb bull mahi. A great catch on the fly! 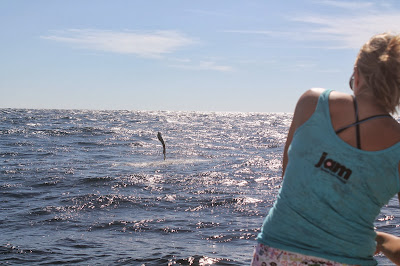 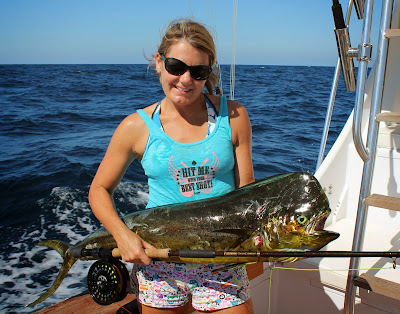 Nice bull mahi on the fly!!
We did release one sail on the fly in the morning session from 2 bites with the other one jumping off just before the release. Later in the afternoon we found some fish further off-shore and enjoyed a great last 2 hours of the day. The fish were still kind of tough to tease in, some coming in hot, the majority slow and not biting, more slashing their bills at the fly. We got some good practice in though and things came together well, we ended up raising 15 sails, 7 bit the fly with 3 jumping off and the other pulling the hooks soon after the bite. 3 billfish releases on the fly from 7 bites on your first attempt is good stuff seeing the fish were not biting aggressively as well. Nice going! 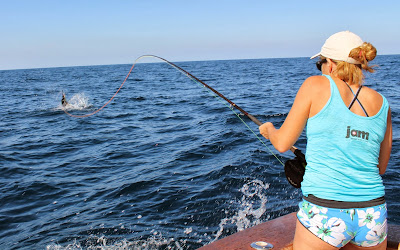 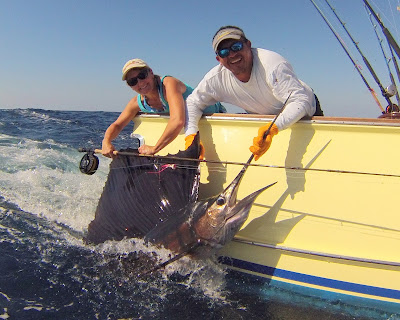 And the results, nice going Amanda…..
All in all, 3 great days on the water. The conditions laid down nicely in the afternoon and weather wise things should get back to normal in the coming days. Water conditions should also improve with a lot of patchy water out there coming right as the winds lay down.
We have just received news of a cancelation in January, some prime dates are now open in what was the best month of the year last season. Get in touch with us here at liz@sailfishoasissportfishing.com to secure these before they go.
Hope to see you down here to experience billfishing at its best!!