We had a great Thanksgiving here in Guatemala, celebrating the holiday with the whole Dishman family flying down from Houston and Beaumont, Texas respectively. ALLURE share owner Hill Dishman bought his parents Annie and Jim III, wife Donelle and son Drake down while brother Jamie bought wife Cindy with kids Jim and Annie. Carol and Rihl Buckley also joined the fun with their kids Anna Louise, George and John. The early arrivals on Tuesday night were the Buckley’s and Hill so they got to fish the next day while the others were flying down. And what a day!!! Great weather and the fish were snapping, we found them at around 11 on the east side of the pocket and from there on in it was non-stop with 3 triple headers and several doubles adding to the 25 from 33 bites before 2.30pm. 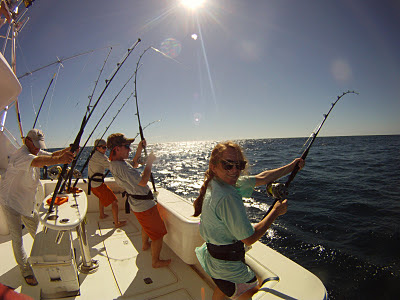 The Buckley’s at it again with Anna Louise, John and George in the far corner on another triple header… 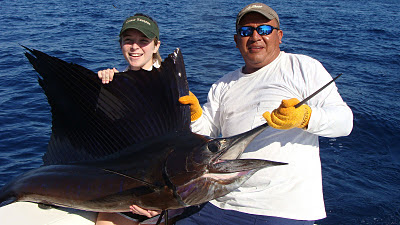 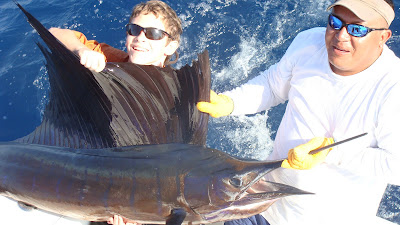 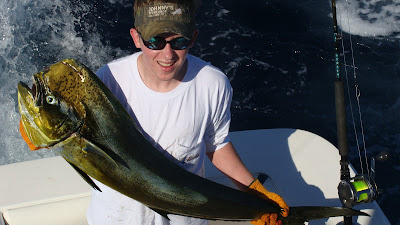 And John Buckley with a nice bull mahi.
At around 2.30pm we had a beauty blue marlin crash the short right teaser, it turned and teased in while Uncle Hill pitched the mackerel, for long seconds the fish disappeared though returned with a great bite and perfect technique had the fish hooked solid. John took over from here on in and the big fish was tough staying down and dirty till the very end when she came up jumping. A nice one too at a solid 400lbs a great first blue marlin release for John Buckley on the 50lb stand-up gear.
Next day we had on the super sized group who braved it in rougher than the previous days conditions. Hill took out Ann and Jim III and achieved the goal for the day getting Jim who just shy of his 80th birthday released a sail and the crew just missed a 200lb marlin staying in close. On ALLURE despite the conditions we released 13 from 21 bites. 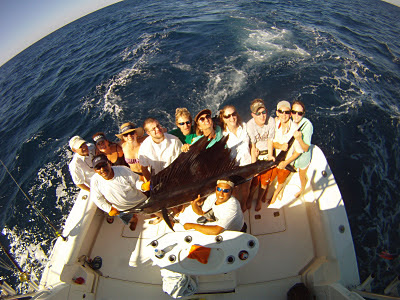 Jamie, Cindy, Annie, Jim, Drake, Donelle, Carol, John, George and Anna Louise.
The staff at SAILFISH OASIS laid on a huge Thanksgiving dinner that night for 18 that was enjoyed by all.
Friday and it was a boys trip with the rest of the crew enjoying the sites of Antigua just an hours drive from the coast and a mile high enjoying a great climate. The weather laid down for us out on the briny as well and we got into the fish once again later in the afternoon finding them on the other side of the pocket to the west. 18 from 31 today and alot of fun learning the techniques of hooking up sails on circle hooks.
Hill and Donelle stayed on for another day of fishing on Saturday 26th while the rest of the crew flew home. Staying in closer today we mixed it up and a fun day releasing 4 on the fly and 4 on the baits before calling it quits early to watch the football 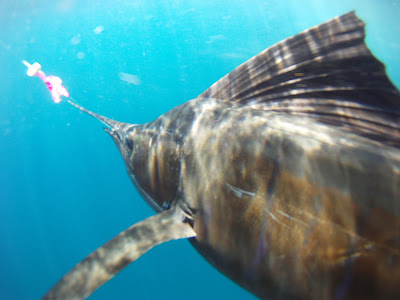 About to remove the fly……
December 29th saw the local Guatemala Club Nautico host the 71st ILTTA with 30 x 3 man teams vying for top team and angler. We fished the first 2 days of the tournament and the bite was going off with 382 sails released on day one for the fleet and 313 releases on day two. There was a layday on Thursday with the tournament resuming Friday and Saturday. the fishing slowed a little the last 2 days though stayed steady with the top boat releasing 56 sails followed by 54 and 53 for second and third respectively.
December 1st-3rd Craig Johnson hosted Henry Wuertz along with Charles Wickman, Fred Herring, Todd Johnson and Steve Goodchild for 3 days of fishing on ALLURE and ADIOS. The blow continued first day out and we returned to the dock early after getting into some sail and mahi action on the morning. ADIOS went out wide the following day in search of tunas, we found the spinners though the only tuna bite for the day pulled off, a couple of nice mahi’s though and 6 sails in the spread. Out to the east the last day we experienced cooler green water though on ADIOS Todd got the bite out of a nice 400lb blue and on ALLURE we got into some sail action and big mahi’s for both boats. 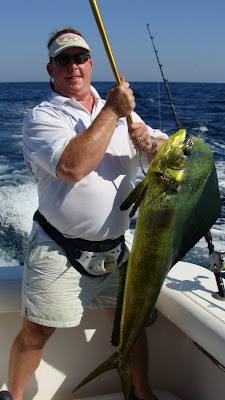 Fred and a nice bull mahi. 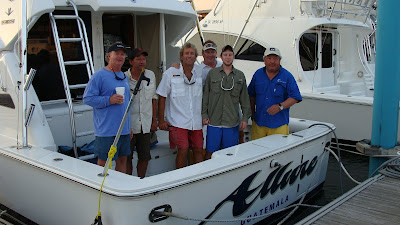 An enjoyable trip all round for Henry Wuertz (far right) James, Fred Herring, Chip and Todd Johnson enjoying cocktails at the end of the day.
The latest Terrafin reports are showing the blue/warmer water coming back in and with it the fishing is sure to be going off. More reports soon.