THE GREAT BITE GOES ON…… 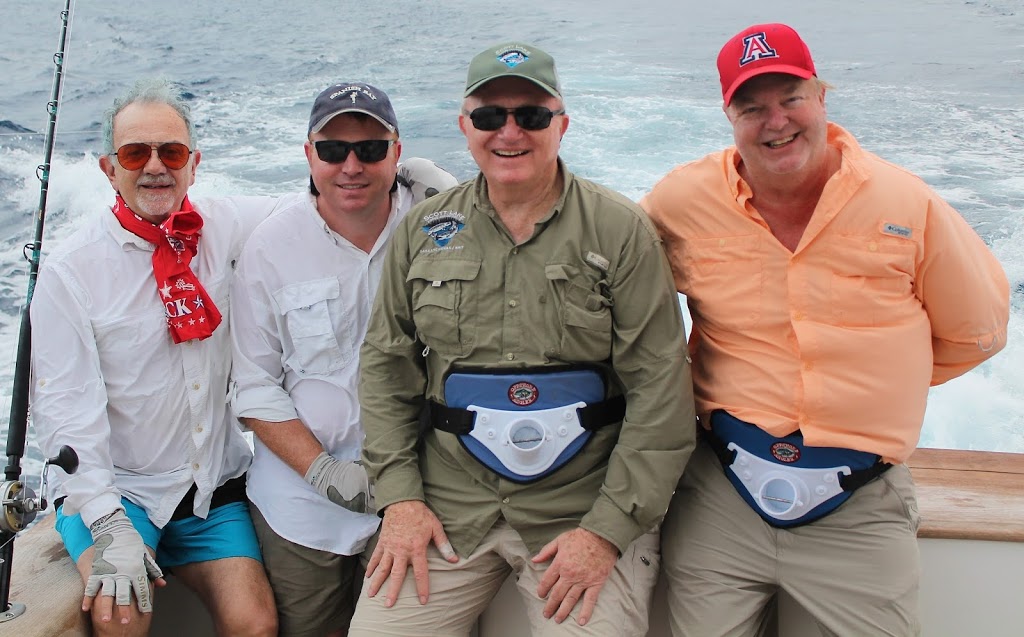 Angel Pala, Matt and Dennis Caldwell and Jeff Quick
January 12-15 it was great to see Jeff Quick from Tucson, Arizona back at the lodge this time fishing with Guatemalan newbies Angel Pala from New Mexico and father and son Dennis and Matt Caldwell from Northern California. And what an introduction for the crew to Guatemalan bill fishing, first day out at the bottom western corner of the pocket we had an incredible day releasing 34 sailfish from 57 bites! We also had a nice blue in the 400lb+ class crash the short teaser and show her size with a head and shoulders bite on the pitched mackerel right off the corner. A bit unlucky with the hook not sticking to that one. Dennis also boated a nice 20lb bull mahi before lunch… 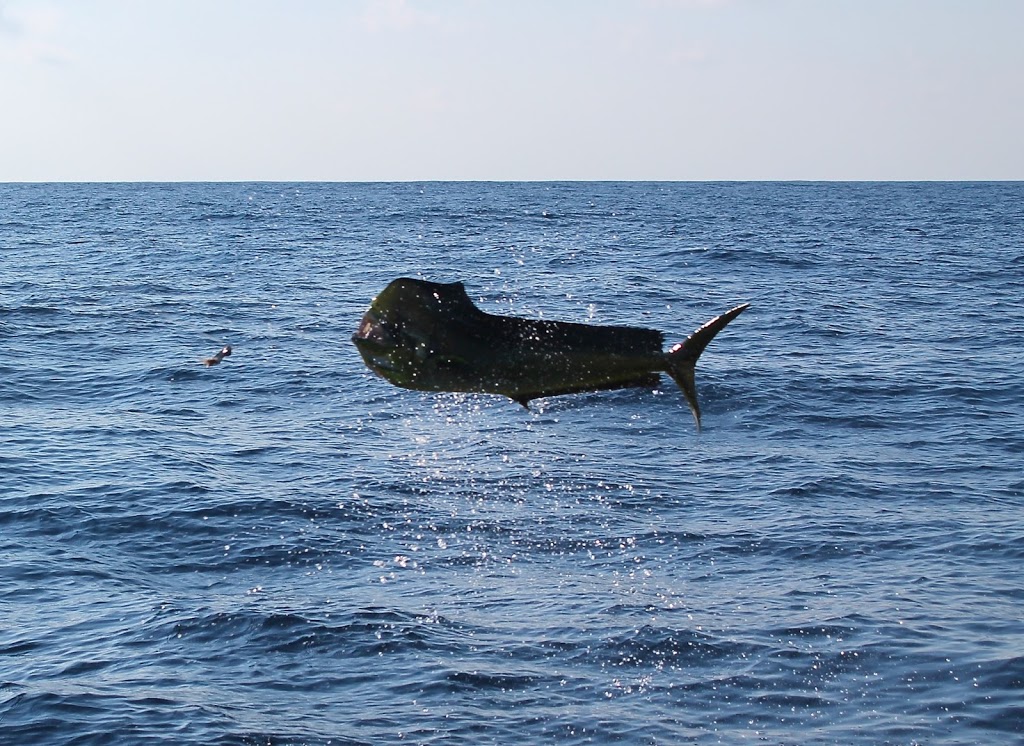 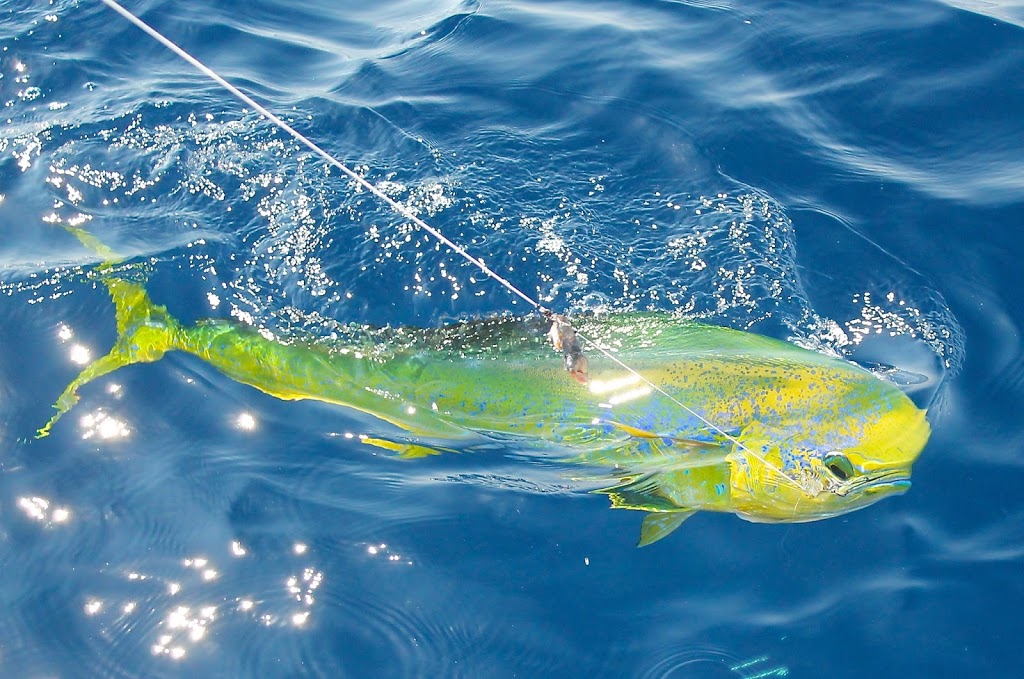 And boatside…
Over the next 2 days we found a couple of logs and tried live baiting around them looking for a blue with no luck and the afternoon sail bite turned on both days with 35 sails released from 66 bites. 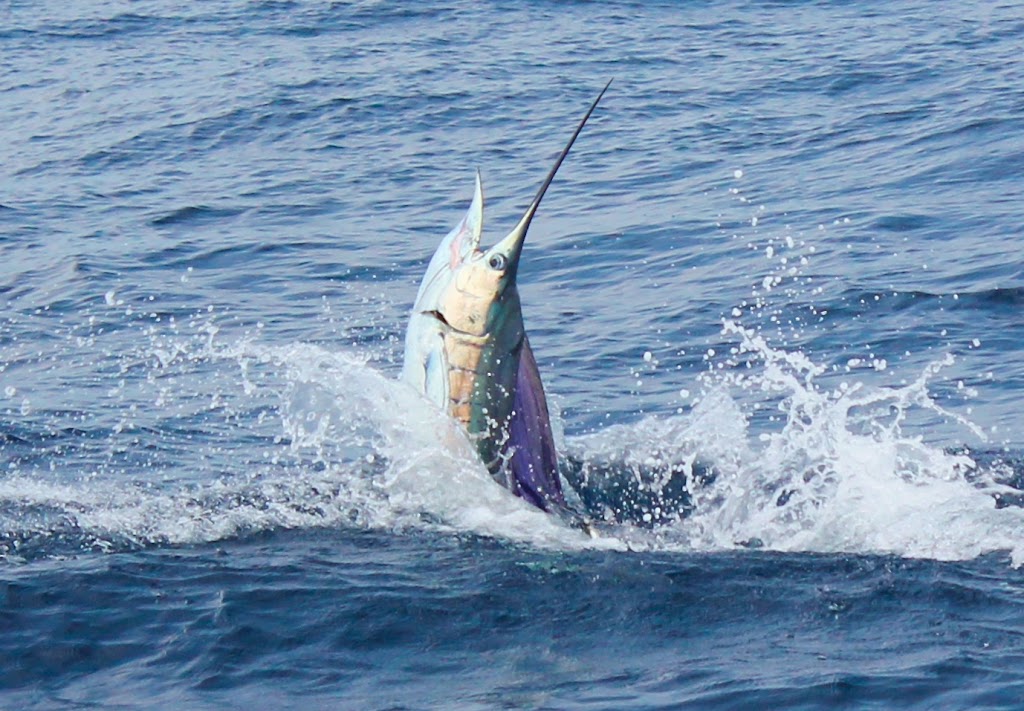 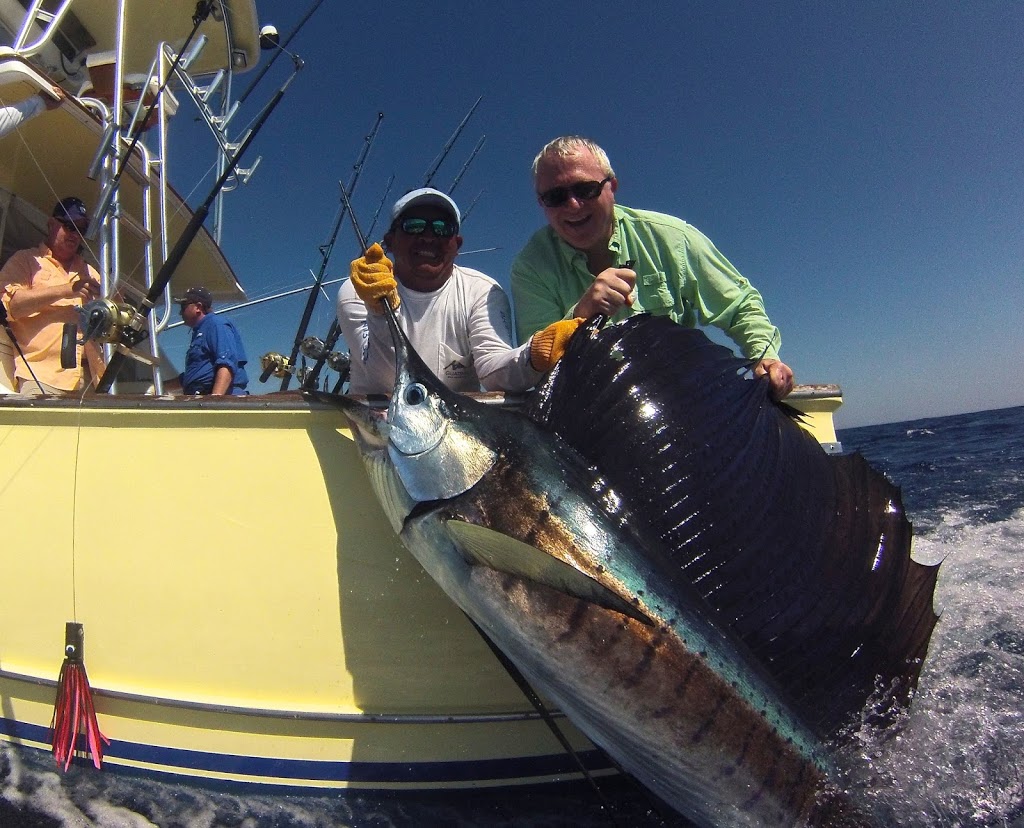 Big sail, quick photo, and released.
Our last day out the guys were keen to try and find some tunas as there had been some good action out wide with 100lb+ tunas reported. We ran to the edge and found a couple of groups of spinner dolphin though unfortunately, no tuna, we covered some ground and did get to release a couple of sails and boated a couple of nice mahis. 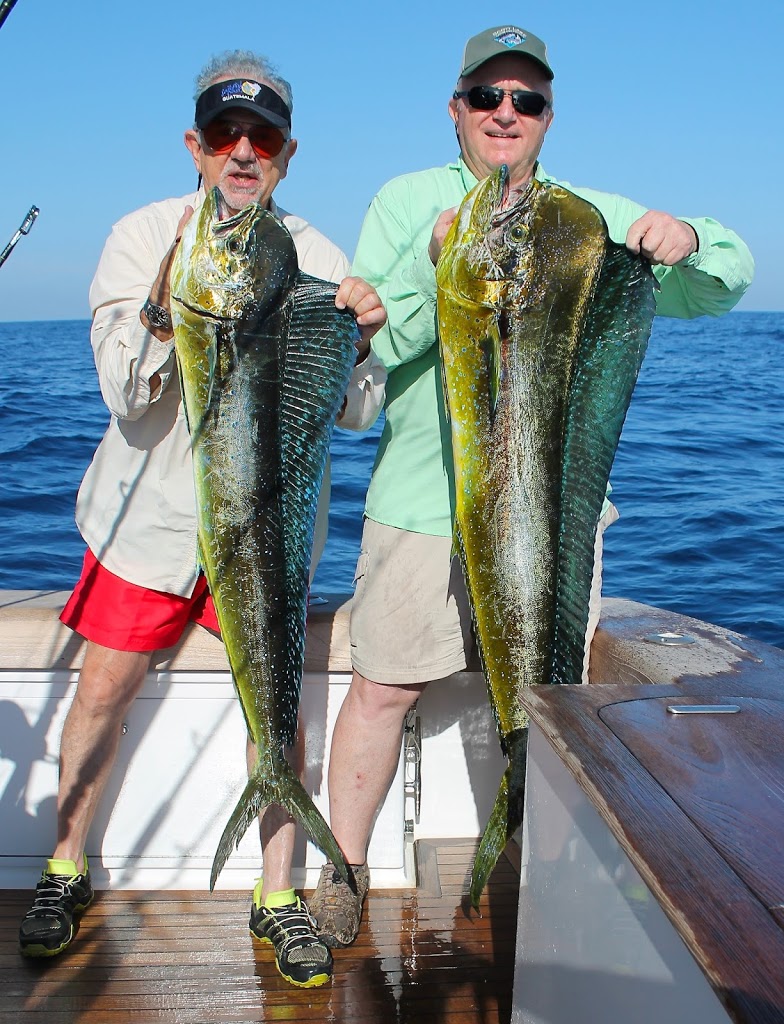 Angel and Dennis.
Near the end of the day we raised a hot blue pushing the 300lb mark. We got a good bite on the pitch bait and after a 20min tussle and a team effort between father and son Dennis and Matt on the 50lb stand-up saw the fish tagged and released… 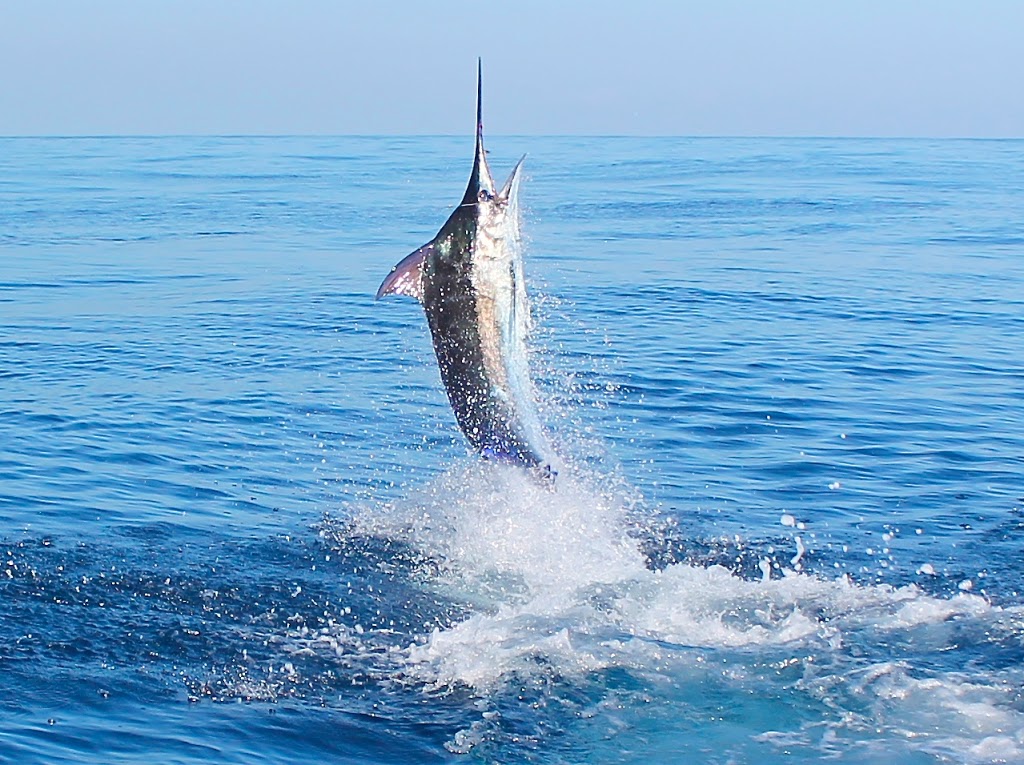 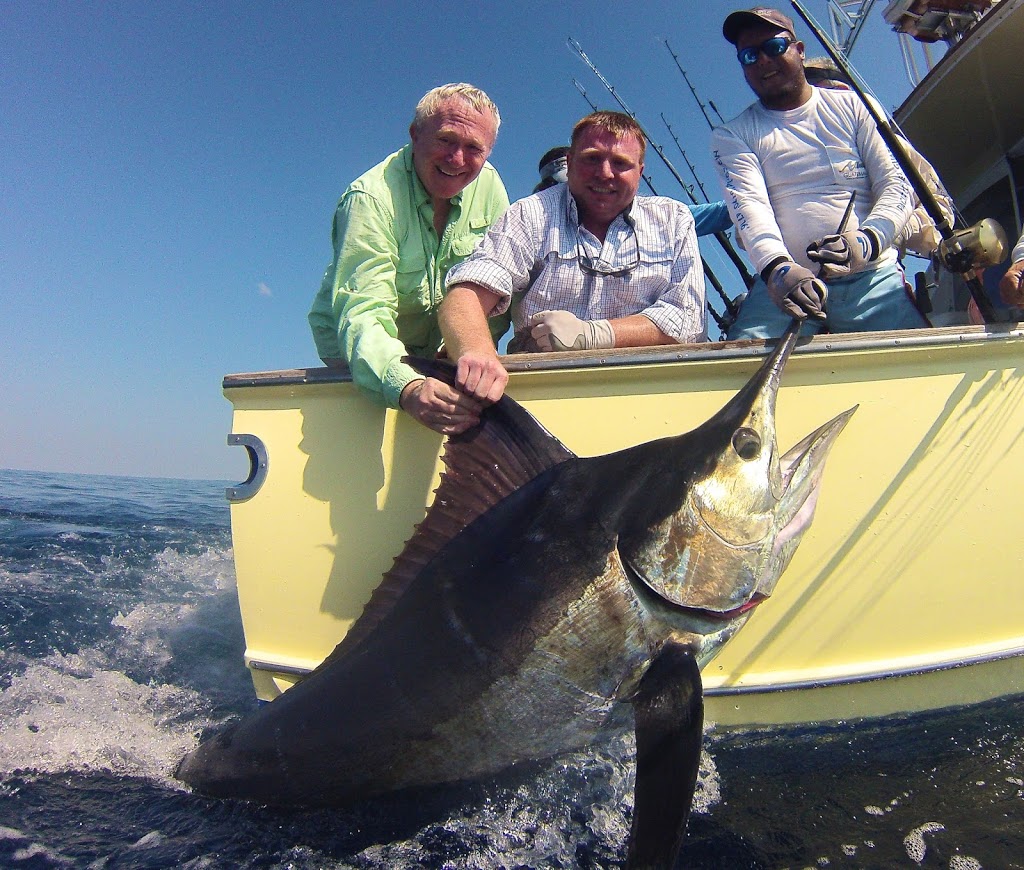 Tagged and released…
A great trip for our crew with 71 sailfish released from 125 bites as well as 1 from 2 on the blues and 3 good mahi’s boated! Looking forward to seeing them back next year!
Cpt. Chris;
Four days of top notch fishing (75 catches). Cpt. Chris and deck crew (Julio and Enio), none better.
Great accommodations at the lodge (Rooms,Shower,A/C), the entire staff could not do enough for our party of 4.
When we return next year, do not know how it can get any better.
My thanks to everyone,
AEP
Taos, New Mexico 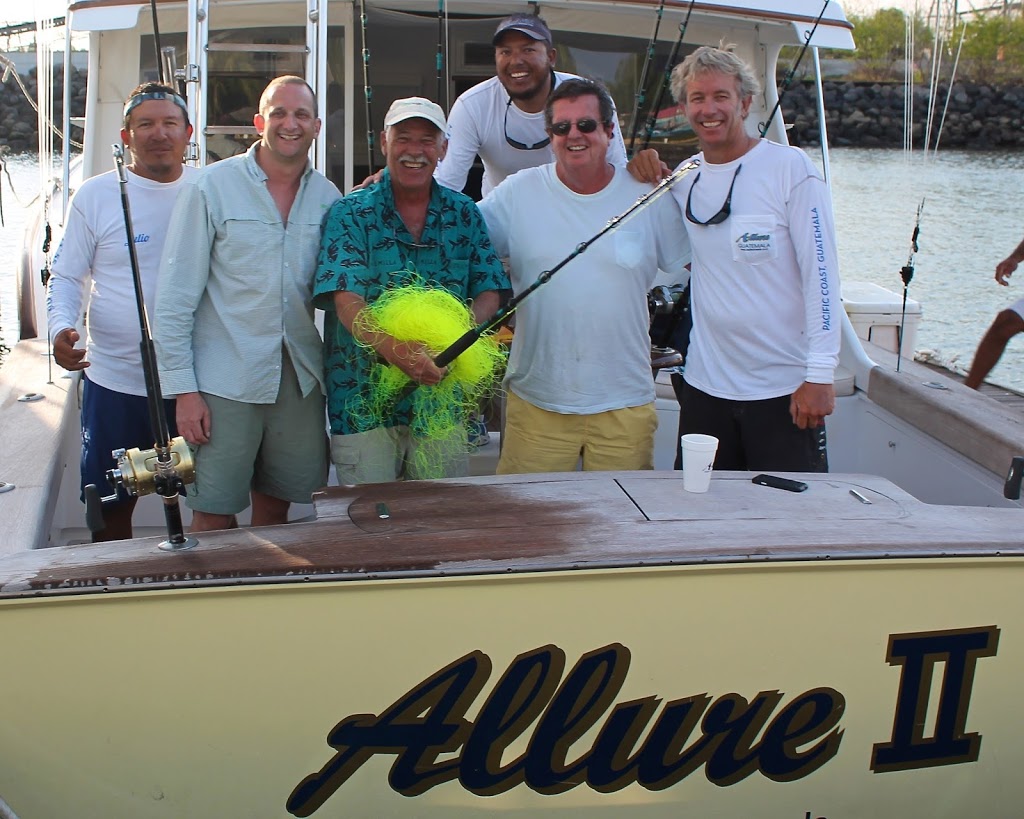 Terence Lonsdale, Brian Shinkle and Tim Lonsdale.
Jan 16-19 good to welcome back old friends, father and son team of Tim and Terence Lonsdale along with Brian Shinkle. We’ve been fishing with these guys for a while and always have a blast, it’s good to see the excitement there and the bite was very good with some hot fish on the teasers, some awesome bites on the pitch baits and some crazy acrobatic sails! 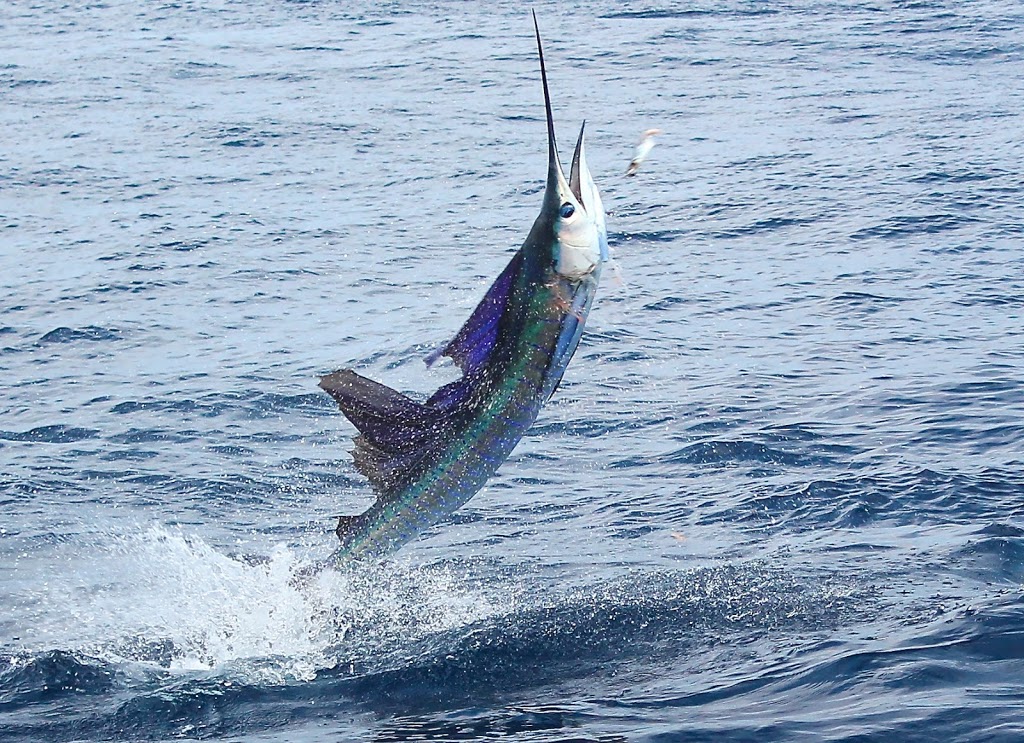 On our first morning out our second encounter for the day was a hot blue marlin that teased in on the long teaser hot as hell though did not switch to the pitched mackerel….Whiskey Tengo Foxtrot…? A bit of a slow start on the sailfish though the afternoon bite was very good and we ended up with 25 sails released from 43 bites. 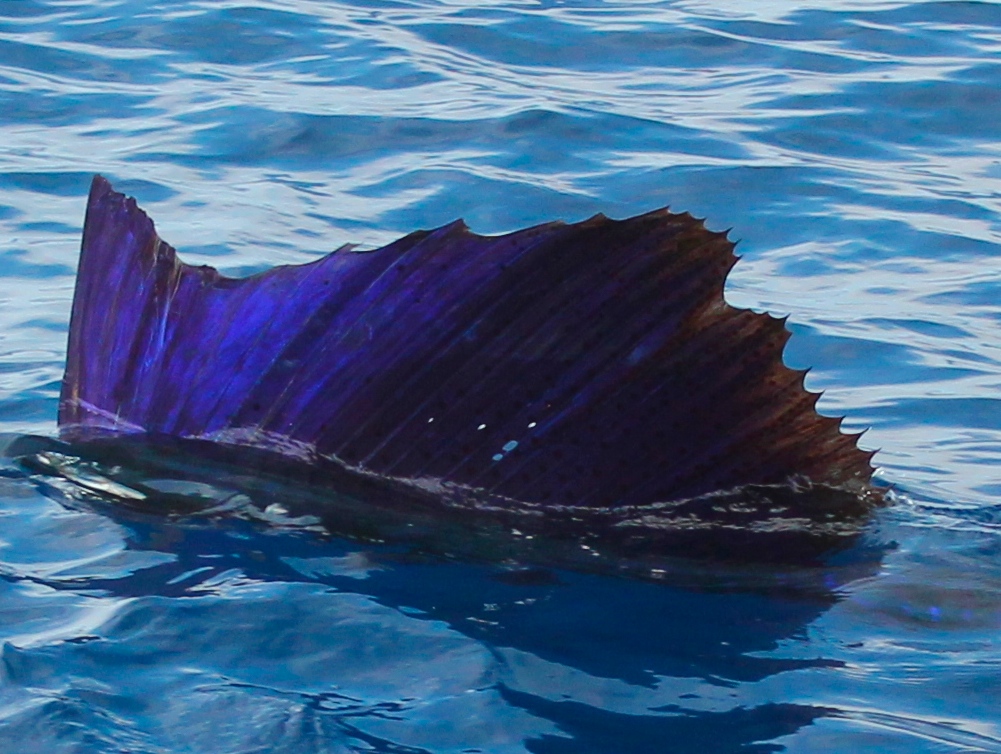 Next morning it was more of the same, another blue came in hot on the same long teaser, this time we got a very aggressive going away bite on the pitched mack and Brian did a great job controlling the spool, we came tight though the fish threw the hook on the first jump…A bit slower today though the afternoon bit once again saved the day and the guys did a great job releasing 21 from 35 bites. 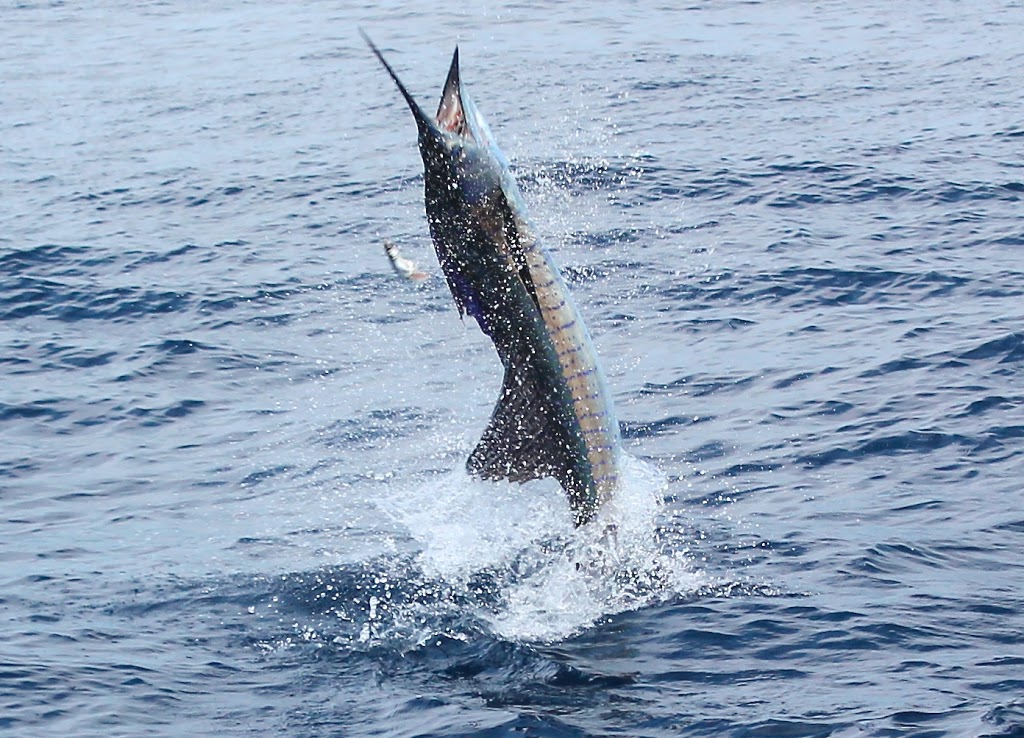 Over the next couple of days the bite picked up and we had some good fishing with 67 releases from 108 bites! On that last day while turning on a hooked sail we had another fish with it’s lights turned on, tail and big pecks lit up electric blue, scream into the spread, we got the bite from that stripey and came tight, though while backing down the hook pulled….no luck on the marlins this trip! We also had another large fish in the spread that didn’t do anything. Some impressive fishing though with plenty of multiples in the spread and 67 sails raised that last day! The guys got their goal of 100 releases with 113 let go from 186 bites and a mahi boated, good fishing, good times!
We’ve had the last couple of days in and the bite out there has just got better with boats releasing 50-70 odd fish each. We’re back out on Saturday and chomping at the bit to get amongst it!! This is looking like it is shaping up to be an incredible season and we aim to make the most of it. We still have February 12 & 13 open, a Friday and Saturday so contact us to get in on this action. Apart from that there are some days that have opened up in early and late March as well.
Contact:
liz@sailfishoasissportfishing.com
See you down here!