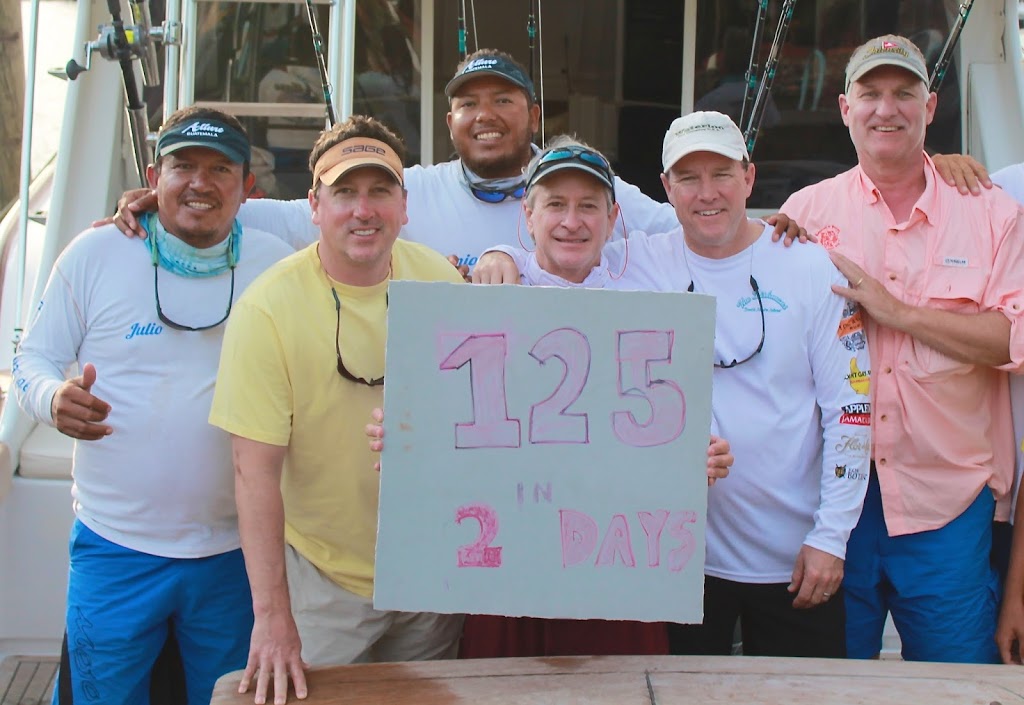 Rick Carr, Hill Dishman, Dean Lane and Trey Strake
January 23rd and 24th we fished the above group hosted by HD, good to see Dean Lane and Trey Strake back down here, bringing with them Rick Carr for his first taste of Guatemalan bill fishing. What an introduction as well, and now, ruined for life…..!!! Bit of an ENE blow our first day out and the day started steady, the further we pushed off shore the better it seemed to get and at around the time we were getting ready to cook lunch the bite just went off. No time for lunch with double after double and the odd triple header thrown in. When the dust settled at 3:30pm we had gone through 135 baits!! The official count for the day was 109 sailfish raised, 102 bites and 69 releases. Awesome day right there with some crazy sights witnessed by us all, lit up and aggressive as all heck sailfish biting hard! 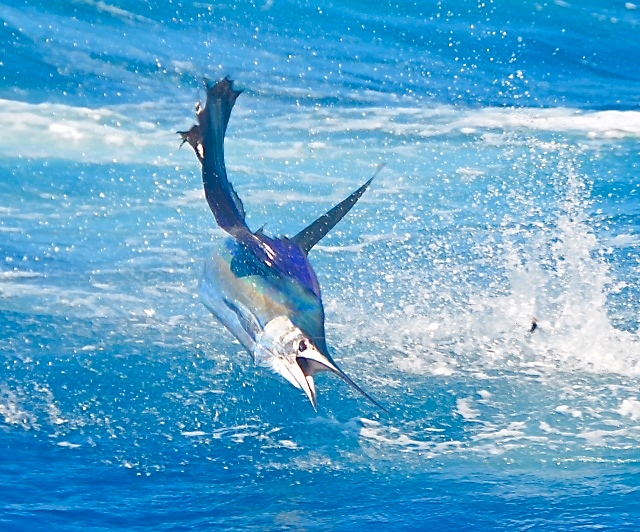 Awesome shot from Dean
The next day out we got into more of the same with consistent action though less multiples coming into the spread and finished with 106 sails raised of which 93 did bite and we released 56. A few more sancocho’s today though all in all the guys fished real well with the 2 day total ending up at 125 releases….Only in Guatemala!! 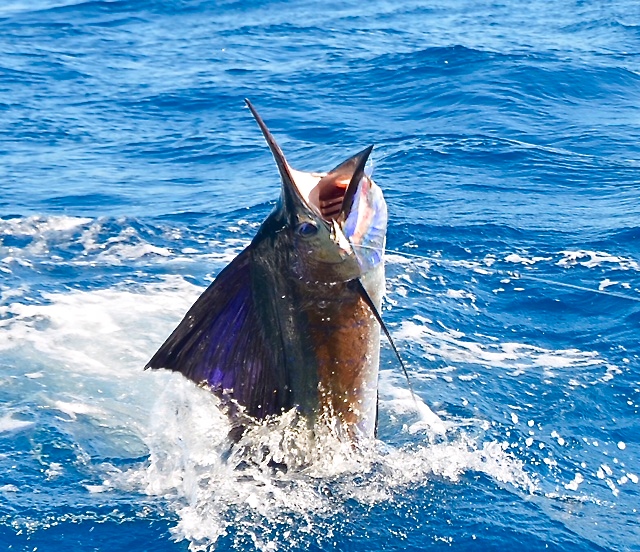 What a great couple of days on the water with some incredible teaser bites and some unbelievably lit up sailfish. 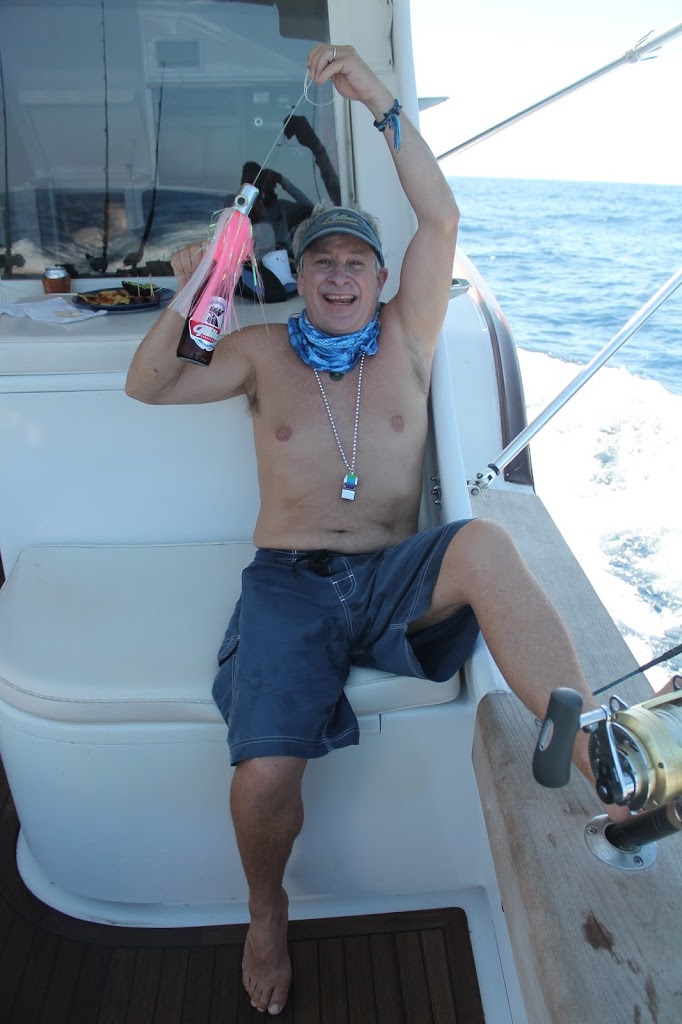 With his famous beer bottle teaser…

January 25th Hill stayed on for an extra day to get into this bite. The fish were moving a steady rate offshore and getting nearer the edge at the 40NM mark and it took a while to get onto them though we found them out there and they were biting. It was an exceptional day with the conditions back to normal, flat seas, deep blue water with incredible visibility and the sailfish were lit up, coming into the spread with pecks and tails neon blue. 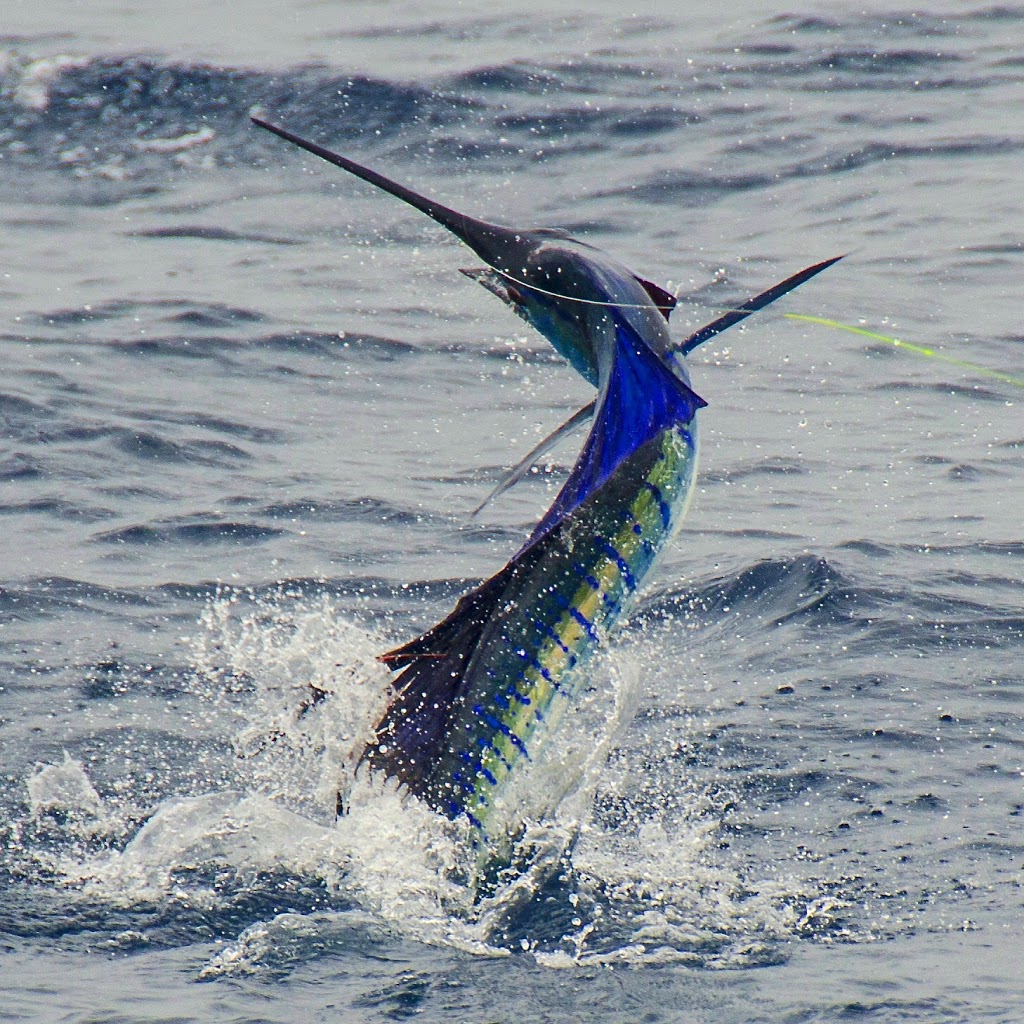 Lit up!!
On several occasions today we had 2 fish all lit up competing over one teaser, coming in hot. The last time it happened we had 2 sails on the bridge teaser, we hooked them both, while making the turn we had another fish on the rigger and another sail on the inside short teaser as it was being cleared, then a striped marlin came in hot, muscling the sailfish out of the way to the teaser, big pecks and tail lit up electric! The stripey overshot the pitched bait and the sail ate it, with nothing on offer it it didn’t hang around for long though what a sight. We ended the day with 71 sailfish in the spread and released 42 from 58 bites. Good fishing!! 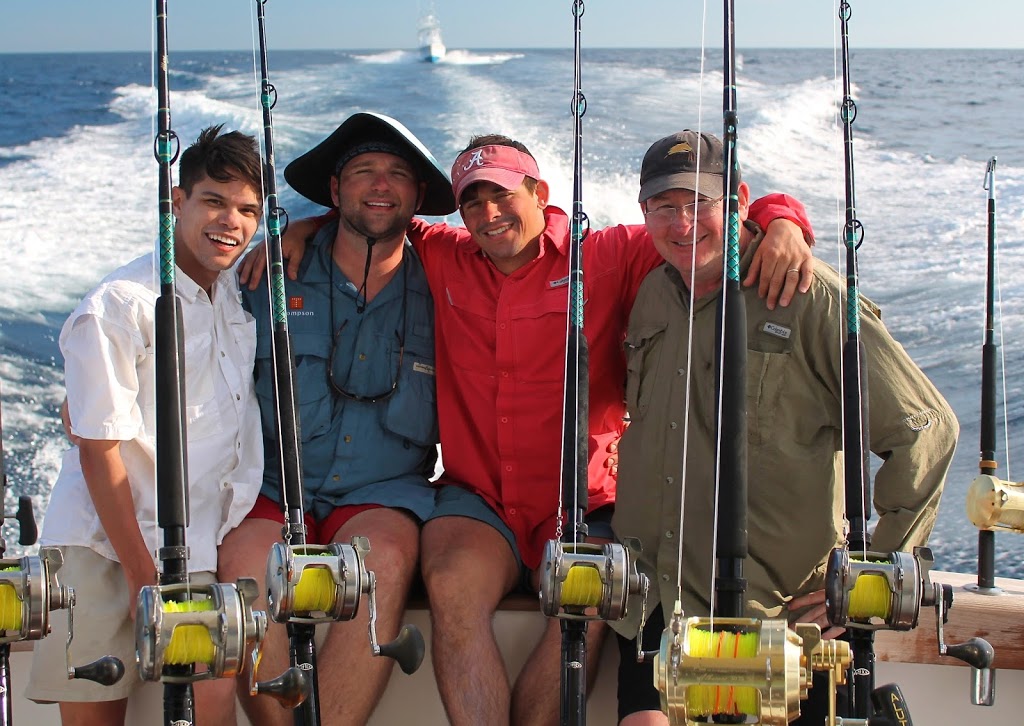 Brendon O’Brien, Grant Salsman, Nick Sissa and David Collard
January 26th through the 29th we hosted the above group for their first taste of Guatemala and 4 days of fishing. It is hard not to head back to a day of 71 raises so we ran back to the edge looking for the fish we had been on. We found areas of birds and the odd sailfish bite though stayed on the move looking for what we had been on the previous day, the fish has done a bit of a disappearing act on us and we couldn’t find what we had been on. Still a good first day out there with the guys hooking all their own fish and releasing 15 from 26 bites and 2 nice mahi’s boated. 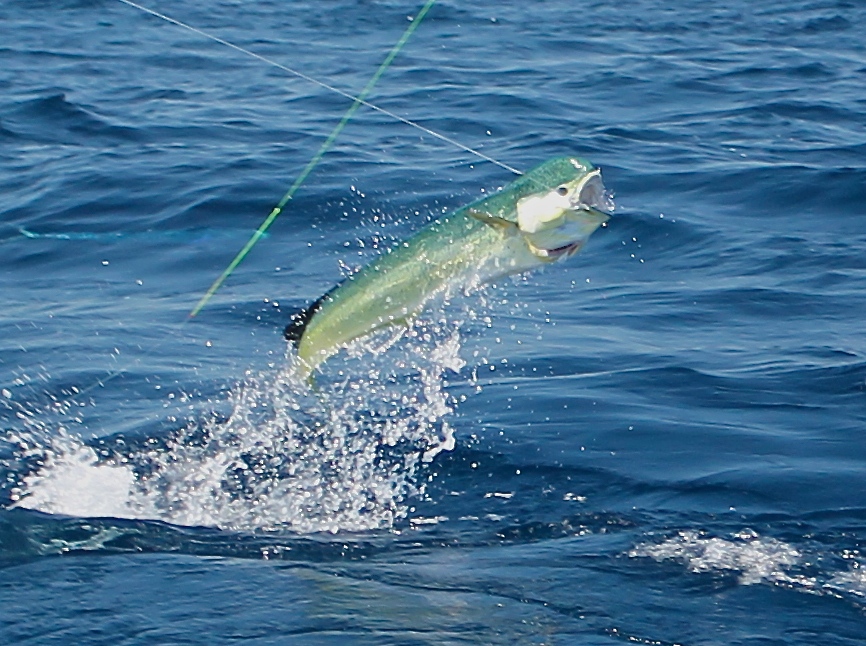 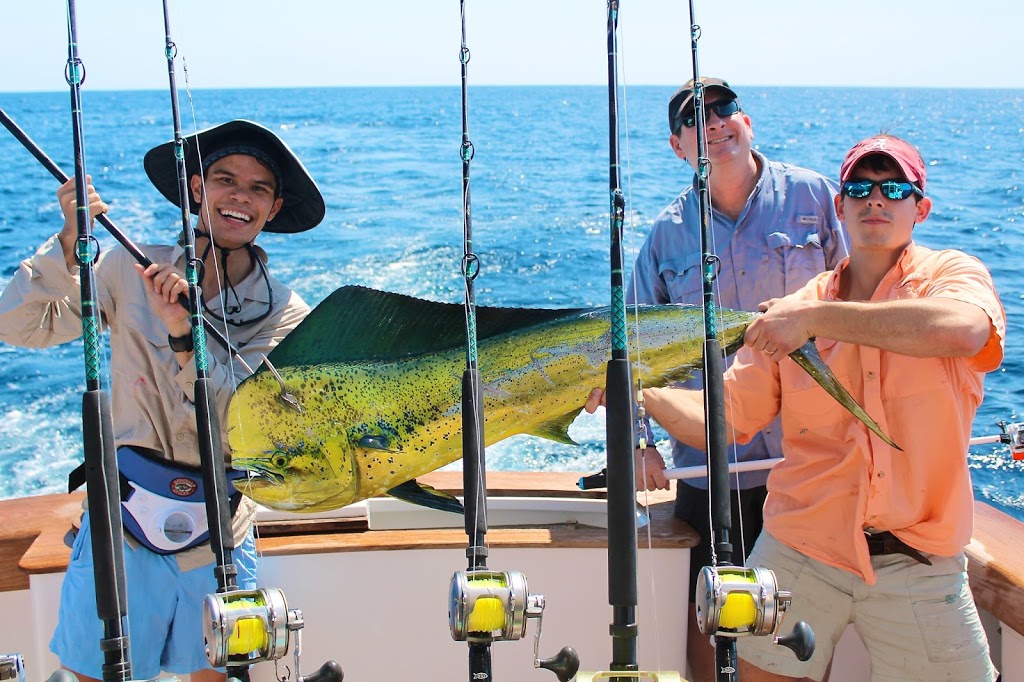 From out wide to the west we went to an area of blue water pushing in from the east and at 17NM off the break wall we started the next day and they were biting hard!! We ended with 100 sailfish raised and from 89 bites the guys released 54. A backlashing good time! Plenty of practice and slowly slowly they were getting it. 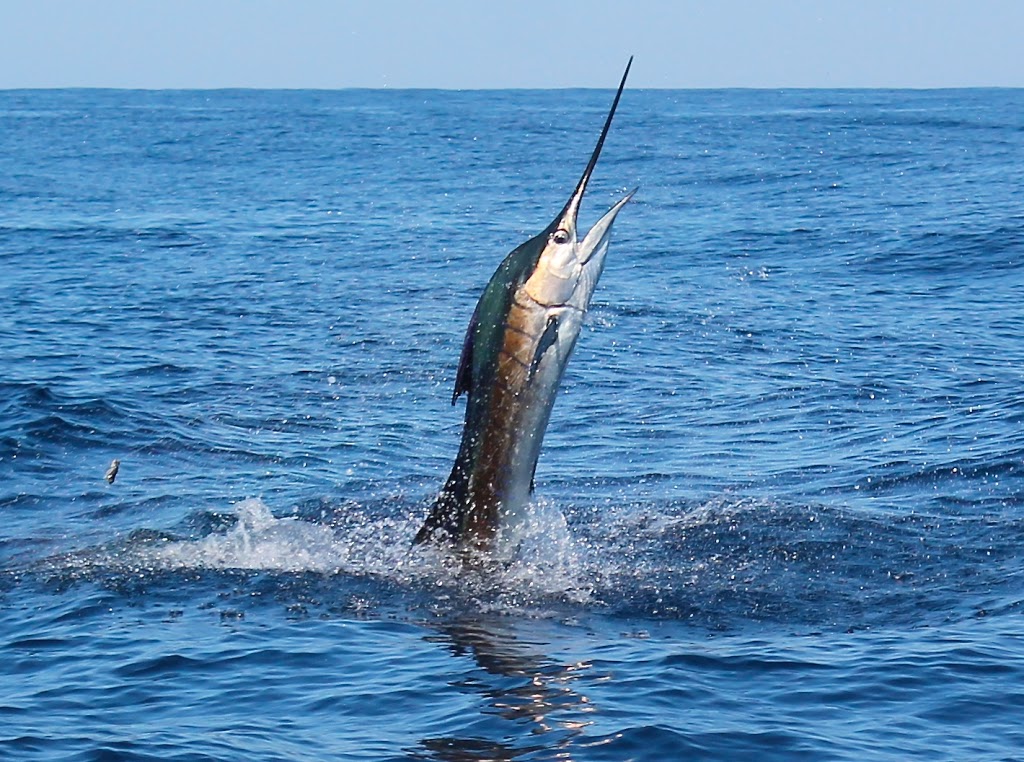 Our next day out the housing on the starboard control cracked (overuse) and we had to fish the day on  the one port side engine. A bit tough to maneuver on one side and it takes a bit of time releasing the multiples though we managed just fine and released 41 sailfish from 63 bites. Pretty good averages there for the guys and we even managed a quintupleta / five banger release on one engine!! Mate, Julio had to help with that one… 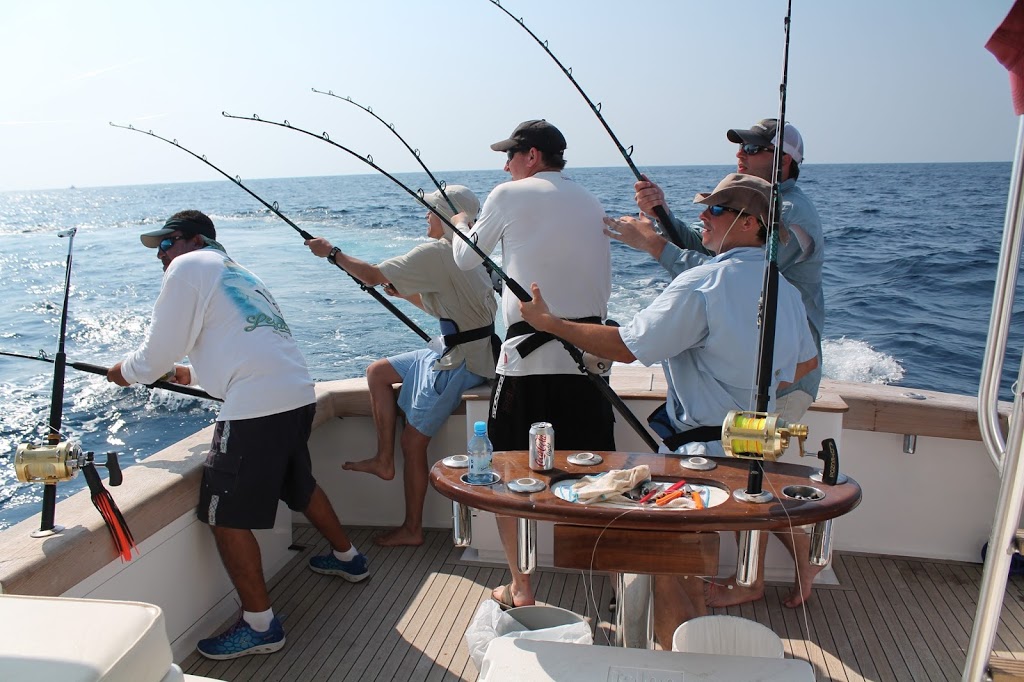 Cockpit chaos…
We worked through the night and got the control changed out and were back into the bite for their last day, very steady today with 77 sails raised and 74 bites…..a few more ‘sancochos’ with 46 releases. 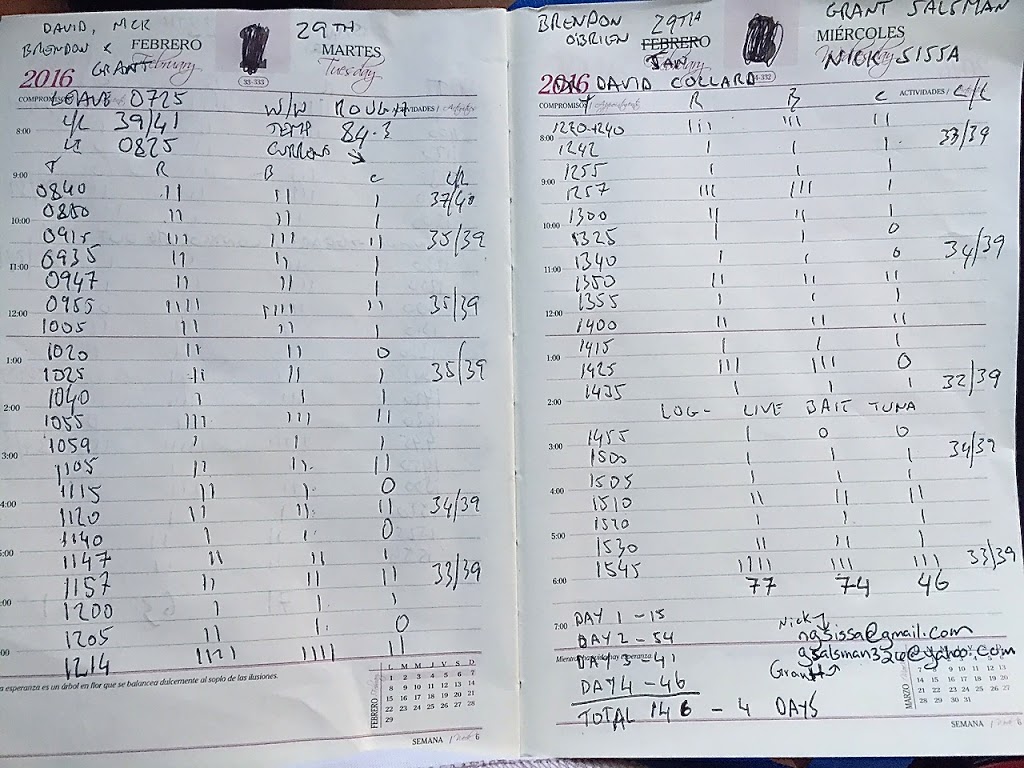 Pretty steady log book there…
What a trip for this crew with 156 sailfish releases from 252 bites and a couple of big mahi’s boated. So good they decide to stay and extra day and are out there fishing with Julio on Allure II right now…
We start a new group tomorrow, Sunday Jan 31st fly fishing the next 5 days. It’s always fun to get on the fly and looking forward to getting back into it.
The fishing out there is just unbelievably consistent day to day and it has been an incredible January all in all. It is a very large area right now with boats working 5-7square NM area. By all accounts it is looking like it is shaping up to be the best season in years here, since November the bite has been very consistent and it looks like carrying on. We have a couple of openings in March so get in touch with us to experience this amazing fishery.
liz@sailfishoasissportfishing.com